Your Brother in the Flesh Stands Up For You

It really is a little bit jarring to hear readings like those appointed for this day, St. Stephen’s Day.  In a season normally associated with merriment and good cheer, in the midst of our specially decorated churches, it seems strange at first that this 2nd day of Christmas, the season marking Christ’s birth, should be devoted to meditating on a martyr’s death.  The message of the angels was, “Peace on earth, good will toward men.”  There doesn’t appear to be either peace or good will in Stephen’s bloody murder.

The holy Child Jesus has indeed brought peace between God and man.  For God and man have been brought together again quite literally in Jesus.  That’s why He is the only Way for you to be reconciled to God; He alone bridges and rejoins heaven and earth in Himself.  But Christ Jesus was delivered and born of woman in order that He might be delivered into the hands of sinful men; God’s good will toward men is manifested in how He was willing to be despised and rejected by men to win our forgiveness.  The wisdom of the church’s calendar reminds us today that those who follow and cling to this Jesus can expect the possibility of similar treatment in this world.  Peace with God means enmity with the world.  The righteousness of Christ given as a free gift will always be at odds with the righteousness that man tries to achieve for Himself through his own spirituality. 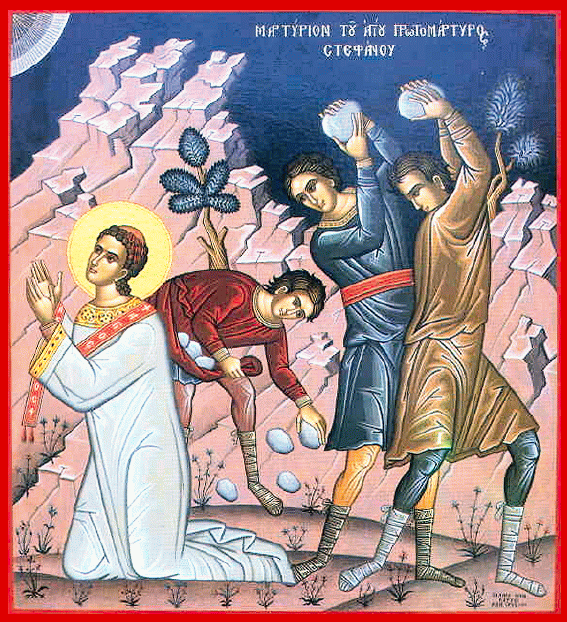 We see this enmity very clearly as Stephen stands before the Sanhedrin and speaks the truth to them–the truth of how they resist the Holy Spirit, who calls them to turn from their works to Christ’s that they might be saved.  Earlier at Pentecost, the hearers of Peter’s preaching were cut to the heart, and they said, “Men and brethren, what shall we do?”  They were brought to repentance and were baptized in the name of Jesus Christ for the forgiveness of their sins.  Now, these members of the Sanhedrin are also cut to the heart it says by Stephen’s preaching.  But a different word is used here showing that their stony hearts were not pierced–like the seed on the hardened path.  For it says they gnashed their teeth at him–growling like the beasts their sin had reduced them to.  One cannot help but think about our Lord’s words regarding those who reject Him in unbelief–for them there will be weeping and gnashing of teeth forever.

Stephen also testified to the truth of what he saw in that moment: the heavens were opened and Jesus was standing at God’s right hand.  The Sanhedrin–the same council that had condemned our Lord–when they heard Stephen say this, they stopped their ears, and they rushed at him with one accord, cast him out of the city, and stoned him to death.

There are several things we should learn from this.  To begin with, we must confess that we also don’t like it when our sin is laid before our eyes and we are called to turn from it.  Our old Adam is a one-man Sanhedrin, who tries to silence the ones calling us to repentance–either by verbally stoning them and attacking them or just by covering our ears, so to speak, ignoring the truth.  God grant that when you are confronted with His Word of truth and cut to the heart, you will be pierced and given repentance, that He will unclench your jaw and unstop your ears, and create in you a clean heart and renew a right spirit within you.

Most clearly, though, we learn from Stephen’s martyrdom how this fallen world, with the powers that uphold its false spiritualities, is a Sanhedrin to Christ’s church.  The world does not want to hear the words of God and wants to silence the voice of those who confess the Christian faith and the saving name of Jesus.  Whether it’s in matters of the teaching on creation, or sexuality and marriage or, above all, in matters of salvation by grace alone through faith in Christ alone, the world stops its ears to the truth, it mocks and marginalizes the faithful, and where possible it tries to cast them out as hateful blasphemers of the cultural dogma and underminers of society.  We shouldn’t fool ourselves into thinking that we’ve yet been persecuted in any way approaching that of the early church.  But perhaps you have been given to glimpse and to experience not just disagreement but the utter disdain the world has for you and your beliefs and your Lord Jesus who said, “If the world hates you, know that it hated Me before it hated you” (John 15:18).  So let us take to heart the words of 1 Peter 4, “Rejoice insofar as you share Christ’s sufferings, that you may also rejoice and be glad when his glory is revealed. If you are insulted for the name of Christ, you are blessed, because the Spirit of glory and of God rests upon you.”

Stephen was blessed by God in this way.  It is written that his face was like the face of an angel.  What does that mean?  Well, where are the angels’ faces turned?  Jesus said that they always see the face of His Father in heaven.  The angels reflect His glory.  So it is also with Stephen.  His face reflects the glory of God in the face of Jesus Christ.  We become like what we fix our eyes on (another reason not to spend too much time staring at two-dimensional screens).  We become like what we fix our eyes on.  Wasn’t Stephen like Jesus here, asking forgiveness for his enemies, commending his spirit into God’s hands?  We have the sure promise of Scripture, “When [Jesus] is revealed, we shall be like Him, for we shall see Him as He is.”

Stephen speaks as one baptized.  For He saw the heavens opened, just as they were opened at Jesus’ baptism.  The heavens are opened for all of you who are baptized into Him.  And in these opened heavens, what does Stephen see but Jesus standing at God’s right hand.  Ordinarily, we use the language of the creed, that Jesus is seated at the right hand of God, the position of ruling and reigning.  But here He is standing.  This is important.  For remember that Stephen is on trial here.  This is a courtroom scene.  Though he is condemned to death by the Sanhedrin, there is One who stands in his defense, who intercedes and speaks on His behalf before the court of the Most High, and who will deliver Stephen from the judgment of ungodly men.

And so it is also for you.  Jesus stood in for you in death as your substitute, and now He stands up for you as your Intercessor and Advocate and Defender.  It is written in Romans 8, “Who shall bring a charge against God’s chosen ones? It is God who justifies. Who is he who condemns? It is Christ who died, and furthermore is also risen, who is even at the right hand of God, who also makes intercession for us. Who shall separate us from the love of Christ? Shall tribulation, or distress, or persecution, or famine, or nakedness, or peril, or sword? As it is written: ‘For Your sake we are killed all day long; We are accounted as sheep for the slaughter.’  Yet in all these things we are more than conquerors through Him who loved us.”  Sin and Satan and the world may condemn and attack you, but you have a mighty Defender and Advocate before the Father, Jesus Christ the Righteous.  He Himself was cut to the heart for you, pierced with a spear, and the blood and water that flowed cleanses you and protects you.  It is good that you stand up for Jesus and confess your faith in Him as Stephen did here.  But what finally counts in the end is that Jesus stands up for you, the incarnate and risen Lord, who has human feet and legs to stand with, your blood Brother, the Almighty Son of God.

And if I may carry this one final step further: standing is also a sign of honor.  Jesus here is honoring Stephen; He stands as if to receive Stephen out of this world and unto Himself.  The psalmist prays, “Precious in the sight of the Lord is the death of His saints.”  So it is for you.  Jesus honors you.  He stands for you, as a Gentleman for His elect Lady, His holy Church.

This is where we find our strength to confess the faith boldly as Stephen did, whether it affects our social standing or our economic standing or our very lives.  We confess Jesus before men in the sure confidence that He will rise to His feet and confess us before His Father in heaven.

Though it may not appear so, Stephen was granted a blessed end.  Though it was not painless, it was blessed, for he fell asleep in Christ, looking to Him who is the Victor over death.  God grant that whether our end is violent or peaceful, that we may die as Stephen did, with our eyes fixed on Jesus, the author and finisher of our faith, who for the joy set before Him endured the cross, despising its shame, and sat down at the right hand of the throne of God.  He is your Brother in the flesh who stands up for you.

(With thanks to another St. Stephen, the Rev. Fr. Stephen Wiest for some of the thoughts above)