The Wedding of Samuel Speckhard and Cacia Scheler

If there’s one thing I’ve learned having a couple of my own relatives in the nursing profession, it’s that you don’t want to have an in-depth conversation about their workday over dinner unless you have a strong stomach.  The nature of the job is that all the realities of the body are being dealt with, and nurses develop a certain comfort level and their own unique sense of humor talking about these things.  There’s no avoiding the truth of our fleshly existence when you’re in the medical field.

And this is not a bad thing.  For this is the way Lutherans talk theology.  Martin Luther said that a theologian of the cross calls a thing what it is.  No spiritualized platitudes or euphemisms.  Lutherans like to speak in direct, physical, tangible, concrete language.

And that’s true then also when it comes to marriage.  On days like today you’ll often hear a lot of flowery language about love and happiness and two becoming one.  And that’s all fine.  But it’s a little too Platonic and ethereal if we just stop there; that comes short of what the Bible actually says.  We heard it a couple times in the readings today, “The two shall become one flesh.”  Marriage is the union of heart and mind and body.  There’s no point in avoiding that reality.  For not only is it how God created things to be, but it also teaches us about our relationship with Him, too. 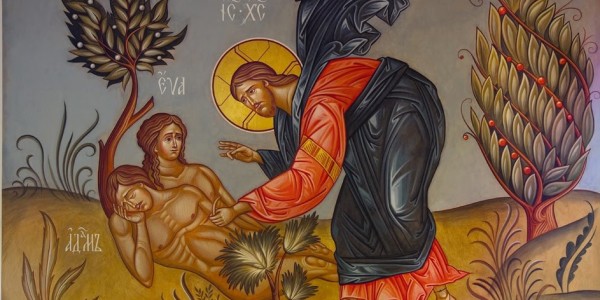 God formed man from the dust of the ground and breathed into His nostrils the breath of life.  But with the creation of Adam, humanity was not yet complete.  Not only is it not good for man to be alone, but man alone does not yet fully reflect the image of the God who is love, the Holy Trinity.  The Trinity is a relationship of persons; those created in the image of God are also a relationship of persons–the Lover, the Beloved One, and the Love that they share together.  Humanity is complete, then, only when Eve comes on the scene.

God created her differently, from Adam’s side, forming her to be like Adam and of equal worth and humanity, but certainly not the same.  Man and woman are uniquely connected in how they were made.  Then the Lord brought Eve to Adam and presented her to him.  That is the reason behind the tradition of the bride being brought down the aisle to her groom.  The one who escorts her, the father, stands in the place of God the Father, presenting this Eve, Cacia, to her Adam, Samuel.  God brought Eve to Adam, and they became the first husband and wife.

Man and woman in marriage, then, are not simply two independent partners bound by a piece of paper, a contract.  Rather, what was one flesh at creation now becomes one flesh again, both figuratively and literally.  God Himself gives you to each other in marriage, and that is why you have permission now to give yourselves fully to each other.

The one flesh union created by God is intended for your mutual happiness and companionship.  There is a very real sense in which the two of you complete each other–not just in some Hollywood movie sense, but in the theological sense of the complementarity of male and female.  Your individual personalities and unique characteristics come together to form a whole that is greater than the both of you.  One of the great gifts God is giving you today is the unique fellowship you will share as husband and wife–the ability to confide in each other, to lean on each other in the challenging times,  to rejoice together in the good times.

And of course, this one flesh reality of marriage is manifested in the procreation of children who are quite literally one flesh of their father and mother.  When and if God grants it, children are the public testimony of the one flesh union that God has created.  Though our culture tends to downplay it, being fruitful and multiplying is integral to what marriage is all about as God instituted it.  That’s one of the many reasons why an actual marriage in God’s sight can only be between a man and a woman, regardless of what any court says.  God seeks to continue His work of creation through your marriage, that your children may be brought up as you were, in the fear and instruction of the Lord, that they may be baptized and brought to trust in Christ and receive the gifts of His salvation.

And that then brings us to the even greater reality of what marriage is all about.  Ephesians 5 speaks of the man leaving his father and mother and being joined to His wife and becoming one flesh, and then it says: “This mystery is profound, and I am saying that it refers to Christ and the church.”  All along we thought St. Paul was speaking primarily about husbands and wives, when the main point was about Jesus.  It is written, “We are members of His body, bone of His bones and flesh of His flesh.”  Jesus is the new Adam and the Church is the new Eve.

“A man shall leave His father and mother and be joined to His wife.”  And so Jesus, the Son of God, left His Father in heaven to be joined to His elect wife, His chosen people.  In order to save us who had fallen into sin, who were cursed to return to the dust in eternal death because of our rebellion, Christ literally joined Himself to our flesh and blood and became man.  Jesus even had to leave His mother Mary behind for a time on the cross.  The second Adam was put into the deep sleep of death for us on the sixth day, Good Friday.  As the first Adam brought death into the world through sin, so Jesus brought life into the world by dying our death for us, taking away our sin and conquering the grave Easter morning.  In the same way that Eve was created from Adam’s side, the Church is created from Christ’s pierced side, from the water and blood that flowed, the living water of Baptism which makes us members of His body, the blood of Christ poured out in the chalice of the Lord’s Supper, by which we are cleansed of all sin.  Through these Sacraments, the Church is Jesus’ radiant bride, dressed in the beautiful white garment of His righteousness.

Sam and Cacia, that eternal reality is what God has given to form the heart and the foundation of your marriage.  Because Christ has forgiven you freely and without your earning it, you are free to forgive each other without making the other earn it.  In leaving your father and mother, Sam, you are doing as Christ did, that you may give of yourself and lay down your life for your bride.  In receiving him as your husband, Cacia, you are a picture of the Church, who honors her groom and submits to Him and His love and returns that love with a glad heart.  Sam, you die for her.  Cacia, you live for him.

Which brings us finally to the part of the sermon where people expect me to give you advice.  Not my forte, but I’ll do my best.  First, Sam, as the husband, remember this one simple truth: it’s your fault–it is, even when it’s not.  For you are in the role of Christ, and He counted all of our sin as His own, as His fault.  Though you both will have things to confess and forgive each other for–and saying “I forgive you” out loud is of the utmost importance–it is especially for you to be the man and not to point the finger and blame, but to take any flaws and failings as your own and cover them as Christ did for us.  For God did not send His Son into the world to condemn the world, but that the world might be saved through Him.  Thankfully we have a Savior who bears our burdens with us and for us to deliver us.

And Cacia, as Sam’s wife, seek your happiness in marriage in the unique ways that he shows love to you, and be a gracious receiver.  Just as it is Christ’s joy to give us joy, so also what makes most husbands happy is when they can make their wives happy and draw their bride freely and willingly to themselves.  So avoid putting up barriers because his attempts to express love may fall short at times, or because you know your own imperfections and don’t feel deserving.  We operate not by merit but by grace.  We haven’t deserved anything from the Lord, and we certainly can’t repay Him, but it is His joy to give to us freely anyway.  Give your husband the joy of freely receiving and responding to his self-giving–just as it is the church’s happiness to receive the love of Christ.

Sam and Cacia, as you are being joined together today, so are your names–your individual names remain the same, your last names become one.  The name Samuel means “God has heard.”  We rejoice with you both of you today that God has indeed heard your prayers for a faithful spouse; you are His good gifts to each other.  And Cacia, as I recall it, your name was given as a shortened form of the acacia trees mentioned in Scripture.  It was the acacia that was used in the construction of the tabernacle where God’s presence dwelt and to make the ark of the covenant.  As Jesus tabernacled in our flesh, as you who are the temple of His Spirit enter into the covenant of holy matrimony, may He make your new household to be His dwelling place.  May He send His angels to guard and keep you.  And may He richly bless the one flesh union of your marriage for your good and for the glory of His name.