In talking about our Lord’s birth, it would be blasphemous, of course, for me to say that Jesus had a twin.  For Jesus alone is the holy Son of God who took on our flesh and blood to redeem us from sin and death.  There is none other like Jesus.  And yet, on this St. Thomas Day, I would suggest to you that there is a sense in which we can speak of our Lord having a twin.  The life of Thomas teaches us of that.

Most of us know St. Thomas only as doubting Thomas.  He was the one who wouldn’t believe the other disciples when they told him that Jesus was raised from the dead.  He said the only way he would believe was if he touched the nail marks in Jesus’ hands and put his hand to Jesus’ side where the spear had pierced Him.  He just wasn’t going to be hurt further after he had seen his Lord dead by believing what he thought was some desperate tale about a resurrection.

And so we usually think of Thomas only as a skeptic and a doubter.  But the fact of the matter is that he could also show great loyalty and devotion.  We heard an example of that in today’s first reading.  Word had just come to Jesus that one His friends, Lazarus, was deathly ill in Bethany.  In the course of events Jesus told His disciples that they were going to Bethany to see Lazarus.

But the disciples balked at this idea.  For Bethany was in Judea, and it was only a short time before that the religious leaders in Judea had tried to stone Jesus and kill him.  Jesus had made the claim to them not only that He existed before Abraham but that He Himself was the Lord God, the great I AM.  The Jews took this to be blasphemy and desired to stone Him.  But He hid Himself from them and eluded them.  Therefore, to go back to Judea would be to risk life and limb, both for Jesus and His disciples. 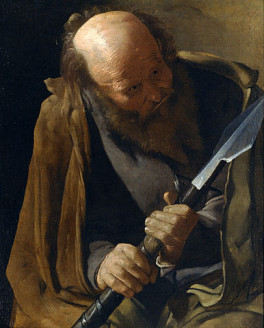 But after their discussion, Thomas said these words, “Let us also go, that we may die with Him.”  Despite the risk, Thomas was willing to go with Jesus.  Even in the face of death, Thomas did not want to depart from Jesus’ side.  Though Thomas, like the rest of the disciples, would not be so bold later on, His courage and faithfulness here is to be praised.

The name Thomas literally means “twin.”  In fact sometimes he was called “Didymus” which is the Greek word for “twin.”  This is a good name for him to have.  For it is a fitting description of all who would be disciples of Jesus.  Remember, Thomas said, “Let us also go, that we may die with Him.”  This is precisely what Jesus calls us to do, to be like Him and to have twin lives that look just like His, dying with Him in order that we may live with Him.  Jesus said, “If any one would come after Me, He must deny himself and take up His cross and follow Me.”  To be a Christian is to be Christ’s twin, to be crucified with Him, which means to drown the old Adam with all sins and evil lusts, to repent.  It is to lay down your life for others in your daily callings and to be willing to suffer.

However, you are also given to be Christ’s twin not only in His death but also in His resurrection.  For through your baptism into His body and your faith in His name, you now share in His risen identity.  You are little Christ’s before the throne of heaven, brothers and sisters of Christ bearing His very image before the Father.  You are as pure and holy as Jesus Himself by His grace.  Sharing His identity and image, you also share in His life.  Jesus said, “I am the Resurrection and the Life.  He who believes in Me will live, even though He dies.  And whoever lives and believes in Me will never die.”  Jesus is the firstborn twin who leads the way for you second born twins out of the womb of death into new and everlasting life.

This is the way about which Thomas asked in the second reading.  Jesus said,  “I am the Way, the Truth, and the Life.  No one comes to the Father, except through Me.”  Jesus has prepared a place for you in the Father’s house by His cross and empty tomb.  And Jesus alone is the doorway into that house.  Participating in His cross and empty tomb by faith, counting yourself dead to sin and alive to God in Christ Jesus, you are given entry to your heavenly home.

Thomas would certainly participate in Jesus’ cross.  According to tradition Thomas went on a missionary journey to preach the Gospel in India.  There is to this day a Christian community in India that claims descent from Christians first converted by the preaching of Thomas.

The tradition states that Thomas suffered a martyr’s death, and that he was speared to death for what he preached.  What a wonderful irony that is!  For even as Thomas wouldn’t believe until he had touched the spear mark in Jesus’ side, so it was a spear that Thomas would take in His own body for the name of Jesus.  Because of His faith in Christ the very symbol that is now identified with Thomas is a spear.  He truly was Christ’s twin.  He shared in Christ’s death, and He will also share in Christ’s resurrection, even as He now dwells according to his soul with Christ His Savior in heaven.

So it is also for you.  Like Thomas, you have been marked as Christ’s twin.  You have received the sign of the holy cross both on your forehead and on your heart to mark you as ones redeemed by Christ the crucified.  Wearing the sign of His death, you shall also wear the crown of life which He has won for you.

This is the sure hope that Christmas brings to you.  God has come in the flesh for you.  Light has broken into the darkness; especially on this shortest day of the year we recognize that. And as Thomas would later see and believe, God is raised in the flesh for you. Our Lord became just like you, so that you might become just like Him.  Blessed are you who have not seen and yet have believed.