“Whoever commits sin is a slave of sin.”  Martin Luther knew well the meaning of those words.  He knew what it was like under the old papal system to feel enslaved to the Law, to be in captivity to his sins and unable to set himself free.  The thing he most felt was the burden of an angry God on his back, driving him, demanding a holy life and penance for sin.  So much did he want to escape his slavery that, instead of a becoming a lawyer like his father wanted, he thought becoming a monk might do the job.  If he just devoted himself fully to being righteous and worshiping God, perhaps then he could break free and the shackles would come off.  But things didn’t get better; in some ways constantly being reminded of the demands of a righteous God, constantly going to confession under the requirement of confessing every single sin only caused him to feel his chains all the more.  This attempt at righteousness by his own efforts and works became a torture.  “Whoever commits sin a slave of sin.”

The same thing is true for us, too; only we tend to experience this in an opposite way.  In our culture, the wrath of an angry God isn’t what runs the show.  For us it’s the absence of any wrath at all that’s runs things, spiritual permissiveness, being free to do as we please.  And that supposed freedom is where we experience our slavery.  For the sins that we enjoy promise us freedom and happiness, but they only ensnare us and bind us and imprison us in the long run.  Our desires and passions end up ruling us.  The technologies that make us feel like we’re lords of our own lives end up being what we serve, what we chain ourselves to for hours a day.  Gluttony enslaves us to our belly and our food, as does alcoholism to drink.  Lust enslaves us to our passions, to pornography, to adulterous behavior that tears people apart.  Laziness enslaves us in a cycle of dependency and pessimism and excuse-making and blame.  Gossiping enslaves us to the never-ending game of one-upsmanship, and really only ends up tearing everyone down, including the gossiper.  Greed enslaves us to our possessions and all the things we have to do to get and hold on to our stuff.  Pride chains us to having to keep up our image and prop up the facade, when deep down we know it’s just hypocrisy.  And on and on it goes . . .  We may not be running for the monastery like Luther, but we, too, often find ourselves grasping at straws because we know that things aren’t right with us, that we’re not truly free.  “Whoever commits sin is a slave of sin.”  And the wages of sin is death. 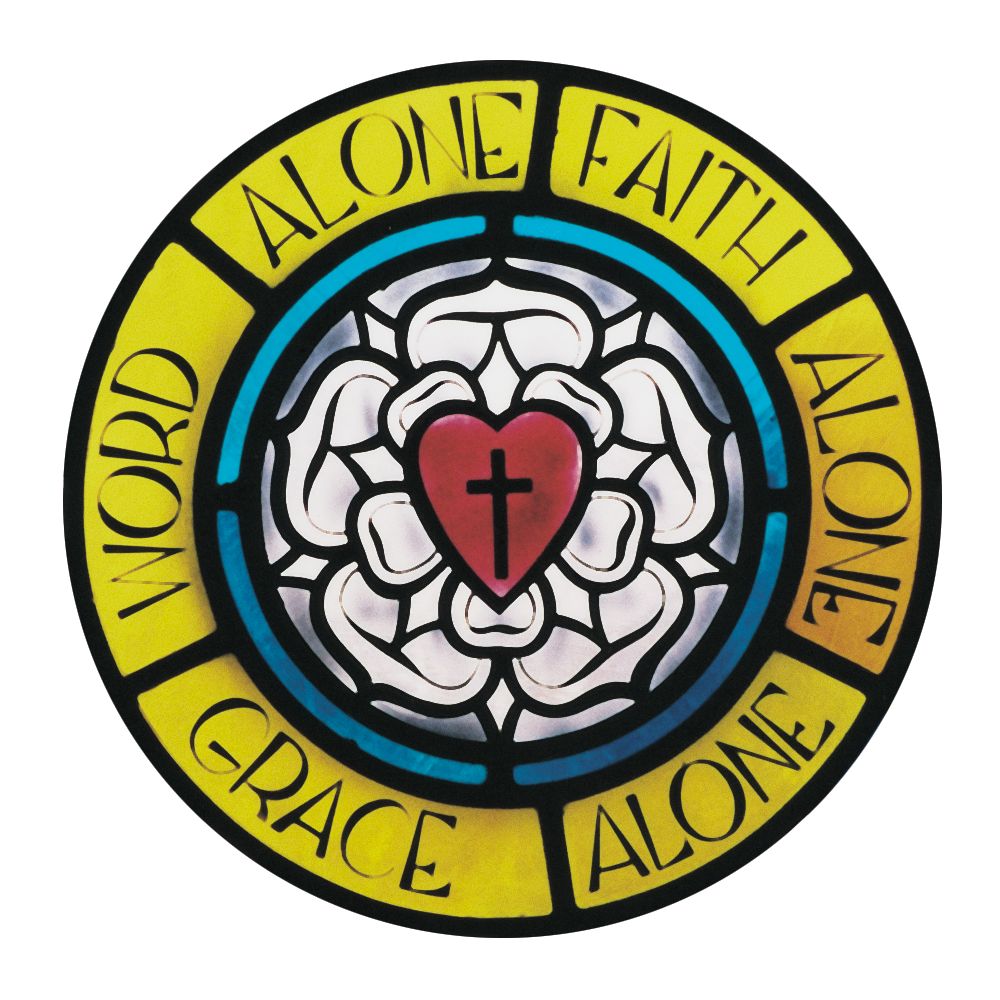 Repent.  God doesn’t just accept your best efforts as being sufficient to make yourself right with Him.  He doesn’t just say, “Try your hardest, be sincere, do what is in you, and that’s good enough.”  What does His Word say?  “Be holy, for I the Lord your God am holy.”  It is a misuse of the Law to try to justify yourself.  We can often be successful in justifying ourselves and our behavior before others in this world.  But that just won’t fly before God.  Besides, if you’re trying to do a good deed so that you can get some sort of reward for yourself–in this world or the next–is that really a good work at all in God’s sight?  What did the Epistle say?  It said the purpose of the Law is “that every mouth may be stopped, and all the world may become guilty before God. Therefore by the deeds of the Law no flesh [no one] will be justified in [God’s] sight.”  You can’t free yourself from the slavery of sin by your own doing.

So what is our only hope of being saved and set free?  St. Paul writes in the Epistle, Since “all have sinned and fall short of the glory of God,” we are “justified freely by His grace through the redemption that is in Christ Jesus.”  Pay close attention to those words.  Don’t let them become passe’ because it’s familiar Lutheran talk.  You are justified freely by His grace–freely!  God grant that we never lose our gratitude for that!  It’s a gift of God to you, without any strings attached.  That’s what grace is, an undeserved gift of love.  God justifies you, He declares you righteous, He puts you right with Himself solely and completely based on the works of Christ Jesus His Son–not what you have done for God but what Christ has done for you.

And here is in particular is what Christ has done for you: the Epistle says that the Lord Jesus redeemed you.  In other words, He bought you back.  He found you in your slave chains, being driven and abused by sin and Satan, and He asserted Himself as your rightful owner, your gracious Master.  He purchased you out of your slavery with His holy precious blood and with His innocent suffering and death.  He went so far as to trade places with you.  He allowed Himself to be enslaved, captured and condemned as if He were the sinner, guilty of every wrong that’s ever been done and every failure to do what’s right.  He was your stand-in on the cross to set you free, so that you stand in His place in “the glorious liberty of the children of God” (Romans 8:21).  Through His death, Jesus conquered your slave masters so that they have no eternal power over you any more.  In the Son of God, Jesus, you are truly free–released, forgiven, alive–as Jesus Himself said, “If the Son sets you free, then you are free indeed.”

Martin Luther puts it this way in the Large Catechism: “The Lord Jesus has redeemed me from sin, from the devil, from death, and all evil. For before, I had no Lord nor King, but was captive under the power of the devil, condemned to death, enmeshed in sin and blindness.  For when we had been created by God the Father, and had received from Him all manner of good, the devil came and led us into disobedience, sin, death, and all evil, so that we fell under His wrath and displeasure and were doomed to eternal damnation, as we had merited and deserved.  There was no counsel, help, or comfort until this only and eternal Son of God in His unfathomable goodness had compassion upon our misery and wretchedness, and came from heaven to help us.  Those tyrants and jailers, then, are all expelled now, and in their place has come Jesus Christ, Lord of life, righteousness, every blessing, and salvation, and has delivered us poor lost men from the jaws of hell, has won us, made us free, and brought us again into the favor and grace of the Father, and has taken us as His own property under His shelter and protection, that He may govern us by His righteousness, wisdom, power, life, and blessedness.”

That understanding of the Gospel, which had largely been lost, made all the difference for Luther.  And so began the Reformation and the restoration of the Gospel to its rightful place in the Church, a heritage we are beneficiaries of down to this very day.

We summarize this belief with the four so-called “solas” of the Reformation: Grace alone, faith alone, Scripture alone, and Christ alone.  Eternal life and a right relationship with God are a pure gift of His grace alone, not because of anything we have done.  We receive that grace by faith alone, apart from our decisions and spiritual efforts.  Our faith is in Christ alone and in no one and nothing else.  And God brings us to faith and keeps us in the faith through His life-giving Word alone and not by anything that comes from within us; all our teaching comes from Scripture and not man-made wisdom or tradition.  To sum this all up, all the glory for our salvation belongs not to us but to God and His abundant mercy.  All boasting on our part is excluded.  Romans 3 states, “Therefore we conclude that a man is justified by faith [in Christ] apart from the deeds of the Law.”

So hear the Word of God to you this day clearly: you have been set free in Jesus.  And remember, then, what you have been freed for: You are freed from slavery to sin so that you might have a new life, the life of Christ in the household of God.  Jesus said, “If you abide in My word, you are My disciples indeed.”  To abide in Jesus’ word is to continue to receive His Word in the many ways that it comes to you and find your life in it.  It is to live in the gift of your baptism, where the Word of God was applied to you with the water, drowning the old Adam and bringing you forth to a new life.  It is to hear the preaching and teaching of the Gospel, by which the Word is applied to you and its gifts are given to you.  And it is to receive the Lord’s Supper, where the Word made flesh is truly present, giving you His flesh and blood for the forgiveness of sins.  Our freedom from sin’s slavery is freedom for life with God.  That’s what we set our hearts on; that’s our goal: to be with the One who made us and redeemed us, to live in fellowship with Him, to bask in His presence, to glory in His gifts to us, to worship Him forever.

The Reformation was about standing against anything that stood in the way of that: whether it’s the Pope with His man-centered works-righteousness, or whether it’s radical reformed churches that reject the words and promises of Christ in the sacraments and instead make it all about man-centered personal spiritual experiences.  False teaching on both sides had to be rejected.  No, Jesus said, “If you abide in My word, you are My disciples indeed.”  The Word in the water, the Word proclaimed from the pulpit, the Word in the bread and wine.  Abide in this, continue in this, trust in this, and you are Christ’s disciple, and you shall know the truth, and the truth shall make you free–free children of God who will abide in His house forever.