Merciful as Your Heavenly Father

One thing I’ve noticed about our fallen human nature is that we have a strong desire to want to place blame and to point out people’s shortcomings when something isn’t quite how we think it should be.  Isn’t that true?  For some reason, when something has gone wrong–at home, at work, wherever–we feel compelled to make clear that it was so-and-so who messed up.  We want to be sure they don’t just get away with their mistake.  We often care more about fixing blame than fixing the problem.  It’s much easier to find fault than it is to show mercy.

Not very many people measure up to our standards, do they?  They fall short in this area or that area.  They’ve got this annoying habit or that character flaw.  It’s easy for us to see such things in others.  Now, if everybody were like me, we say, then maybe things would be better.  But think about it.  What if everyone were just like you?   That sounds to me like a good formula for a horror movie, where everybody walking around is an exact replica of your personality.

And even more importantly, what if God were like you?  Would that be good news or bad news?  What if God judged you in the same way you judge others?  What if God exposed all the thoughts of your heart toward others and all of the gossip you’ve spoken about them?  What if He were in the business of finding fault and making sure you 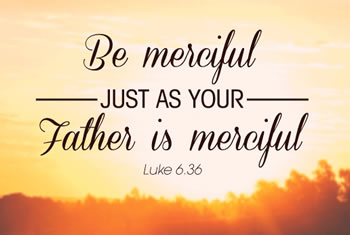 experience the full consequences of what you deserve?

Jesus warns us that if we insist on living without mercy toward others, we are inviting God to be without mercy toward us.  If we’re all about pointing out specks of sawdust in other people’s eyes, the 2 x 4 in our own eye is going to end up bludgeoning us in the head.  “Judge not, and you shall not be judged.  Condemn not and you shall not be condemned.  Forgive, and you will be forgiven.  Give, and it will be given to you: good measure pressed down, shaken together, and running over will be put into your bosom.  For with the same measure that you use, it will be measured back to you.”

Such words, while good and true, must also terrify us and crush us.  For we have no power of ourselves to do what God asks, not truly and fully, not from the heart with the right motivations.  We don’t want to give away our money and do good to those who hate us and pray for those who use us.  We want payback!  We are not sons of the Most High by nature, we are children of the evil one.  Realizing this, all we can do is to cry out to the Lord, “Help me!  Save me from myself!  Have mercy on me!”

And the good news in today’s Gospel is that our Father in heaven is merciful.  He is abounding in steadfast love.  In mercy He causes His sun to rise on the evil as well as the good.  And He sends rain on the righteous and the unrighteous.  He provides daily bread to all people, even those who hate Him and reject Him, even those who through false religion want to use Him for their own purposes.

But God’s mercy does not stop there.  His mercy extends even to the point of sending His Son into our very flesh to save us from the curse of death.  Though Jesus was blameless, He allowed all of our blame and our blaming to be put on Him.  Jesus made all of our faults and sins His own, and He set us free from their condemnation by dying for us and shedding His blood in our place on the plank of the cross.  Now, because of that, the Father in heaven finds no fault with you.  For you who believe wear the holiness of Christ.  You are forgiven and cleansed and righteous in Jesus’ name.

Remember, that’s how God sees you.  The Scriptures say, “There is now no condemnation for those who are in Christ Jesus.”  God’s not watching you just waiting for you to mess up so that He can nail you.  For He already nailed His Son on your behalf.  God’s not in the blame business.  He already took care of all of that at Calvary.  He’s in the mercy business, mercy that is limitless and overflowing.

Jesus is Himself pure mercy in the flesh.  Just consider how His words are embodied and fulfilled in His own life.  He is the One who gave freely and did good to all, healing and helping, asking for nothing in return.  He is the One who, when He was struck on one cheek during His trial did not retaliate but turned the other cheek.  He loved His enemies, blessed those who cursed Him, and prayed for those who spitefully used Him.  Remember what He said on the cross of those who crucified Him, “Father, forgive them, for they know not what they do.”

The Father continues even now to answer that prayer for you.  He perpetually pours out His forgiveness and mercy to you through Christ from the cross.  In fact so great and generous is His love that He even gives you the right to call Him your Father.  Jesus says here, “Be merciful, just as your Father is merciful.”  Only Christ can rightly claim God as Father.  And yet He invites you to step into His place and call God your Father.  When the angel Gabriel came to the Blessed Virgin Mary, he said that her child would be called the Son of the Most High.  Now that you have been baptized into Christ, you are also counted as sons of the Most High.  That is rich mercy, that God the Father gives you the same status as Jesus.  You have become as little Christs before the Father.

And if that is true, then you are also given to become little Christs to your neighbor.  Jesus has given you to stand in His place before the Father by faith.  And now you are called to invite your neighbor to stand in your place, that is, to love your neighbor as if He were your own self, to “be merciful, just as your Father also is merciful.”  You live in Christ, trusting in the Father’s mercy, and Christ lives in you, being merciful toward your neighbor.  It’s all about Jesus.  For there is no mercy apart from Him.

Your old Adam can show no real mercy; he’s always in the “I’ll do a favor for you if you can do a favor for me” business.  And so your sinful nature must die through repentance, that Christ may arise in you to be merciful.  By His preaching and the sacraments Jesus dwells in you to love even your enemies and to pray for your antagonists and adversaries.  He lives in you so that you may walk by faith in the Father, letting go of your desire for vengeance, trusting in God to take care of that. Through Christ you know that your life is safely in the hands of the Lord and Judge of all.  Jesus already suffered and paid for your enemies’ sins.  And He says of those enemies who reject His mercy, “Vengeance is Mine, I will repay.”  You don’t have to worry about payback, because God will take care of that.  He’s better at vengeance than you are anyway.  It’s in the Lord’s hands, hands once nailed to the cross.  Perhaps your enemy will repent and be saved by the same mercy that saved you.  And if not, vengeance is the Lord’s.

Confident of that, you are now free to feed your adversary and give Him drink and to overcome evil with good.  Living in Christ you get to forgive those who have used you, as Joseph did his brothers.  You get to put the best construction on other people’s words and actions and to cover over and ignore their failings and shortcomings.  You get to do good to all, whether or not the recipients are worthy.  You get to lend your money, whether or not you’ll ever get as much in return.  For you know that you have the greatest good in Christ and treasure in heaven.

This is the way of life in Christ, the life of mercy.  It’s not a way that ignores or doesn’t care about what’s right and wrong.  That’s not what “judge not” means.  The world abuses and misuses this verse to mean that immorality and false doctrine should be tolerated.  But “Judge not” doesn’t mean “Condone sin.”  We’re not loving our neighbors by approving of things that cut them off from eternal life.  Rather, “judge not” is the way which acknowledges that God’s mercy in Christ is greater than the faults and sins of our neighbor and of ourselves.  Only by His mercy do we live.  It is as Jesus said to the woman caught in adultery–and note both parts of this statement.  He said, “Neither do I condemn you; go and sin no more.” By God’s mercy the plank is taken out of our eye.  By God’s mercy we forgive and remove the speck in our brother’s eye.

That mercy comes to you again this day in His supper; good measure, pressed down, shaken together, and running over will be put into your bosom as you receive Christ’s holy body and the cup that runs over with abounding love, His holy blood poured out for you for the forgiveness of sins.