In the Image of Love, the Holy Trinity

It’s not enough simply to say that you believe in God.  That’s an incomplete confession of faith.  For the term “God” can and does mean any number of things to any different number of people.  “God” for a Hindu or Muslim or Buddhist is something much different than for a Christian.  Most Americans will say that they believe in God, but that God is often just a generic and undefined being.  The true God is certainly more than just the “man upstairs,” as Isaiah learned.  Who is the God you believe in?  Who is the one and only true God?

That’s where creeds like the Athanasian Creed come in and are so important.  They may seem unnecessarily detailed at times, but they are important both because they defend against falsehood, and because they declare the Scriptural mystery of who the one true God is.  He is the Blessed Holy Trinity, the Father, the Son, and the Holy Spirit–one God in three persons.

Reviewing very quickly, Scripture makes it clear that there is only one God.  Deuteronomy 6 says, "The Lord our God, the Lord is One."  Isaiah 45 says, "I am God, and there is no other."  Unlike the pagan religions which had many gods that were connected to parts of creation–the god of the moon, the god of the sun, the god of the sea–Christianity confesses only one God, who has created the moon, the sun, the sea, and every living thing, and who is Himself outside of creation. 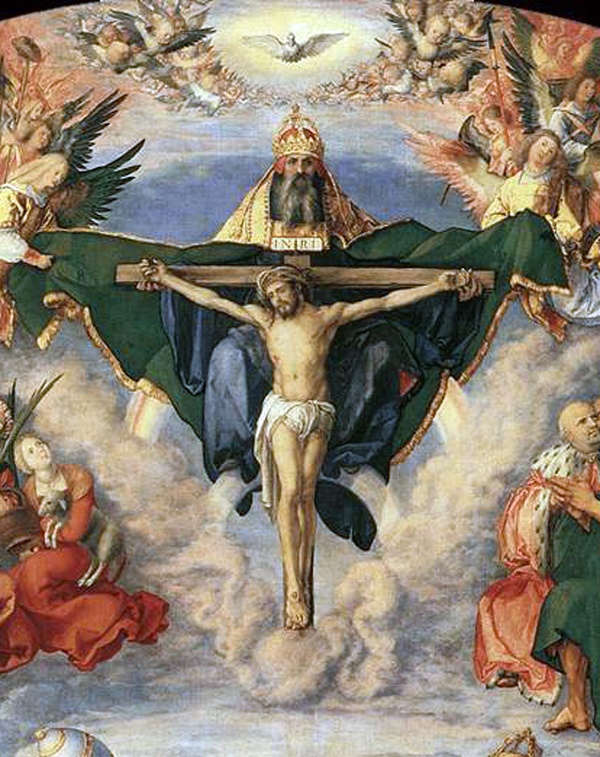 But the Bible also clearly teaches that this one God is three-fold.  Three distinct persons are referred to as God in the Scriptures.  First there is God the Father, the One we are directed to pray to in the Lord's Prayer, the one James refers to as the source of all good and perfect gifts.  Second, there is God the Son, Jesus Christ.  John 1 says, "In the beginning was the Word (the "Word" being a name for Jesus) and the Word was with God and the Word was God . . . and the Word became flesh and dwelt among us."  And third, there is God the Holy Spirit, who proceeds from the Father and the Son.  In Acts 5 it is said that Ananias lied to the Holy Spirit.  And then the Apostle Peter declared to him, "You have not lied to men but to God."  Clearly then, the Father, the Son, and the Holy Spirit are all God.

And therein lies the mystery.  It's not as if each of these three persons are 1/3 God, so that when you put them all together, you've got the one true God.  But of course neither is it true that there are three Gods or even three different forms of God.  No, each of these persons are fully divine, and yet they are so perfectly united and joined together in love that there is only one God.  That is the paradox of the Trinity.

Now, you may be thinking to yourself, “Why spend all the time and effort on this?  What’s the point?  This isn’t something that’s rationally understandable anyway, so why should we make a big deal out of it?”  Well, for one thing, if we only paid attention to those teachings of the Bible that were logically explainable, I don't suppose that we would baptize or have communion or believe that God became a man in Christ.  Those are mysteries of the faith, too.  But more importantly, this is our God, this is how God has revealed Himself.  Part of worshiping Him is meditating on who He is, even if we can’t fully grasp it all in this life.  There is much to be gained simply in pondering who God is and what He has done for us that the Scriptures declare and the Creeds confess.

And here’s one benefit in particular in meditating on the doctrine of the Trinity:  The better we understand what God is like, the better we'll understand what we've been created to be and to do.  For man was created in God's image, right?.  Mankind was made to be a reflection of God's being.  So understanding Him is going to tell us something about ourselves.

Now, keeping in mind that God is a Trinity, listen to Genesis 1:  "Then God said, 'Let us make man in our image, after our likeness . . .'  So God created man in His own image, in the image of God He created him; male and female He created them."  First of all, notice that God says, "Let us make man . . ."  A conversation is going on within God Himself, between Father, Son, and Holy Spirit.  But also notice what God then created!  Did He make a single, androgenous, self-contained being?  No, He created a relationship of beings who together formed a oneness and a unity.  When God made man in His image, He made them male and female.

Now, of course, I'm not suggesting that there's anything "female" in the nature of God, like some churches do which ordain women, or which change masculine references to God to feminine ones, even going so far as to baptize in the name of "Mother, Daughter, and Comforter."  God's masculine nature is clearly made known in His self-given name, the Father, the Son, and the Holy Spirit who proceeds from them both.

An early church father, St. Augustine, gives us some helpful thoughts in gaining a deeper understanding of the Trinity.  He began with the Bible verse, "God is love."  Now love, he said, isn't something which involves only one person.  In fact it has three aspects:  the one who loves, the one who is loved, and the love itself.  Augustine equated these three aspects of love to the three persons of the Trinity.  So, for instance, at the baptism of Jesus, the Father's voice came from heaven saying, "This is my beloved Son," and then the Holy Spirit came to rest on Him.  The Father is the One who loves, the Son is the One who is loved, and the Holy Spirit is the Love itself, that love being an actual person.  So within God there is a relationship of outward reaching love that draws the Father, the Son, and the Holy Spirit together in a perfect unity.

That’s why it’s just not right to lump modern-day Judaism and Islam into the same category as Christianity and call them all monotheistic, as if we all worship the same God.  We don’t.  The Trinity is of a very different nature.  The Christian God of the Old and New Testaments is very different from those who have rejected Jesus as the Son of God.  If you think about it, the other so-called monotheistic religions cannot have a god who is love within Himself.  For love by its very nature requires more than one person.  Allah cannot be a god who is love; for he’s all by himself.  Poor guy is lonely; maybe that’s why he seems grumpy all the time.  Only Christians can say, “God is love,” the blessed Holy Trinity.

We can see from this, then, just how highly God has exalted marriage, that He made it the first relationship to reflect His image.  Adam was the one who loved, Eve was the beloved, and together they shared in a love from God that drew them together as one.  There's the three we were looking for, the third usually being concretely represented in the children God gives.  To be created in the image of God, therefore, means that we are to be reflecting divine, self-giving love–not only in marriage, of course, but in all our relationships–the kind of love that caused God to create us in the first place, a love that seeks to extend itself and reach out and give and sacrifice in order to draw others into a harmonious unity and a God-pleasing oneness.

Now, understanding that such is the image of God, we must admit that as we look at ourselves and the world around us, it's often difficult to see that image being reflected in our relationships.  We should not forget or ignore the fact, therefore, that since the creation of Adam and Eve, mankind has fallen into sin.  The image of God has been corrupted and broken in us.  We no longer reflect who He is.  And that, at its essence, is what sin really is–a degrading of our Maker by failing to mirror His goodness, a rebellion in thought, word, and action against the nature of God, in whose likeness we were intended to be.  God is loving and self-giving, we are often self-centered and proud.  God is characterized by unity and oneness, we are often characterized by division and individualism and a stubborn attitude of self-sufficiency.  Such a corrupted image of God is doomed to eternal separation from Him.

Fortunately for us, it is in God's nature to love even the unlovable.  As we heard in the Gospel, “God so loved the world that He gave His only begotten Son, that whoever believes in Him should not perish but have eternal life.”  And Romans 5 says, "God demonstrates His own love for us in this:  while we were still sinners, Christ died for us."  You might say that God was just being Himself when in His love He initiated His plan to rescue you.  In the sending of Jesus, God was reaching out in a complete and ultimate way in order to draw you back into unity with Himself.  On the cross Jesus received the full judgment for your corrupted natures.  And then by His resurrection from the grave, Jesus restored the image of God for you.  Therefore, all who are joined to Christ by faith share in that restored image and are made right with God.  That's what Baptism and Holy Communion are all about.  You are baptized into Christ.  You are fed with His very body and blood.  Through those means, God makes you one with Christ and recreates you in His likeness.  As Colossians 3 says, "(You) have put on the new nature [of Christ] which is being renewed in knowledge according to the image of its creator."  We look forward, therefore, with eager expectation to the second coming of Christ, when that newness will be fully revealed in us, when the vestiges of our corrupted natures will be forever destroyed, when we will perfectly reflect the image of God and share in the unity of His love.

So, you see, to reflect upon the doctrine of the Trinity is not just a once-a-year exercise in intellectual gymnastics.  It is rather to meditate on the God who is love and who is life for us all.   To begin to understand God is to know what you were created to be by the Father and who you are in Christ by the working of the Holy Spirit.  It is to be drawn into the Father’s love given you through His Son, poured out upon you by the Holy Spirit, so that you may share forever in His divine life.  Blessed be the Holy Trinity and the undivided Unity.  Let us give glory to Him, for He has shown mercy to us.  For from Him and through Him and to Him are all things; to Him be glory forever and ever.  Amen.