“The Word became flesh and dwelt among us.”  What a marvelous reality that is to ponder, and I don’t think we can fully grasp the wonder of it.  The Word of the Father, His mighty “Let there be. . .,” the eternally begotten Son of God, through whom all things were created, the very Logic of the universe in whom all things hold together, who exists outside of space and time–He Himself entered into space and time, took up our humanity into His divine nature, and became our flesh and blood, our fully human Brother.  Amazing.  “Veiled in flesh the Godhead see, Hail the incarnate Deity!  Pleased as man with man to dwell, Jesus, our Immanuel!”

But why did our Lord do this?  Why did He join our humanity to His divinity?  Well remember that God created us because of His nature as the One who is Love.  His desire from the beginning has been to give Himself to us and to bring us into full communion and fellowship with Him.  In the beginning God and man dwelt together in the Garden.  There was no division between heaven and earth.  But then as you well know, Adam and Eve caused a great rupture in their relationship with God.  By deciding to go their own way and rebel against God’s Word, they and all of us who have followed right in their steps have been cut off from God.  Heaven and earth were split apart.  Through our sin we distanced ourselves from God.  We created a grand canyon between us and Him that we could not cross.  And so God, in His great mercy and love, Himself crossed the canyon and came to us, that our humanity might be cleansed and that we might be restored to fellowship with Him again.  “The Word became flesh and dwelt among us.” 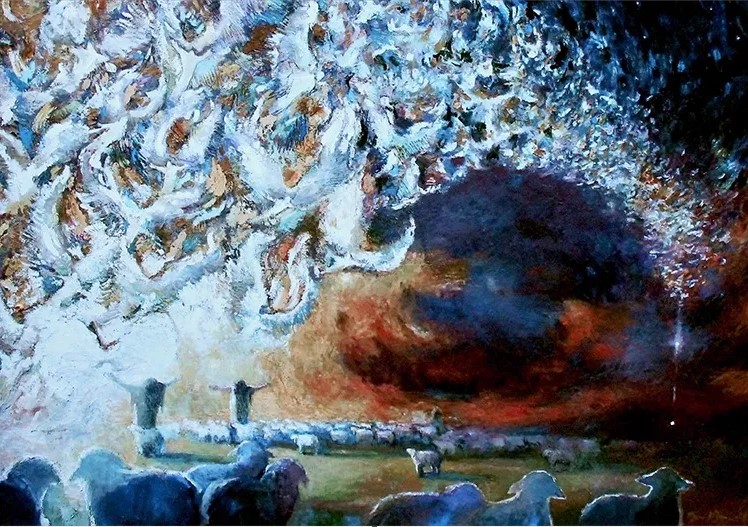 One way of understanding what is happening here is by paying attention to the angels.  We heard about them in last night’s familiar reading from the Gospel of St. Luke.  Because it’s familiar, though, we sometimes miss the absolutely unique marvel of that angelic appearance.

Angels were certainly not unknown to Israel, and the entire history of Israel occurred under angelic oversight.  But nowhere in the Bible is there a cluster of angelic appearances like we find at the beginning of the Gospel story.  An angel appears to Joseph to tell him to take Mary as his wife, and Joseph obeys the angel’s instructions.  Angels appear again to instruct Joseph to flee from Israel to escape from Herod and then to tell him to go home from Egypt back to Israel.  Gabriel appears to Zechariah to announce the birth of John, and the same angel appears again to Mary to announce the birth of Jesus.  An unnamed angel announces the birth of the Christ to the shepherds, and then that angel is joined by the heavenly host praising God for the birth of Jesus.  Why are angels suddenly making such frequent appearances?  What do these angelic appearances have to teach us about the meaning of the incarnation?

Angels live in heaven, in the presence of the Lord. They surround Him as His “hosts” or “armies” according to the Psalms, standing at the ready to be deployed to do the Lord’s bidding.  They continuously worship the Lord in heaven.  Whenever an angel appears on earth, he arrives from heaven.  When angels appear at the birth of Jesus, then, they’re bringing heaven to earth.  Note what they sing to the shepherds, “Glory to God in the Highest, and on earth peace, goodwill toward men.”  Jesus is heaven on earth, heaven become flesh, and so it is fitting that He should be surrounded, as His Father is, by angelic hosts.

We are so familiar with this Christmas scene that we don’t recognize just how unique it is.  Nowhere else in Scripture do angelic choirs sing on earth.  Nowhere.  This is an absolutely unique inbreaking from Heaven to Earth.  Heaven and earth, which are often referred to separately throughout the Gospels, are being brought back together in Christ.  All authority in heaven and earth has been given to Him.  Jesus is restoring proper order within the creation.

“In the beginning God created the heavens and the earth.”  Because of mankind’s fall, heaven and earth are out of sync, estranged, at war.  Earth goes its own way, ignoring heaven and defying the God of heaven.  There’s no longer harmony between the different zones of creation.  But through Jesus the Last Adam, God establishes an outpost of heaven on earth.  Because heaven comes to earth, earth will be brought back into harmony with heaven.  Because of Jesus, heaven is exerting its power on earth again, and bringing earth back into the heavenly order.  Because of Jesus, God’s will is going to be done on earth as it is in heaven.  Because all authority in heaven and on earth has been given to Jesus, what the church binds on earth will be bound in heaven.  For far too long there has been dissonance between heaven and earth.  Earth was out of tune and didn’t keep in step with the rhythms of heaven.  But all this changes at Christmas.  When Jesus comes as Heaven on earth, He brings the heavenly hosts with Him, so that earth is as full of the music of heaven, so that earth’s music will harmonize with that of heaven.

The Word became flesh and dwelt among us.  Think of what tremendous good news this is!  Think of the great honor that is given to mankind and how this elevates us all.  Through Jesus, the Word, we share the same nature with God.  The devil hates this, but the holy angels rejoice at this.  It has been said that the angels were created to train human beings to rule the earth. And so man is, for a little while, lower than the angels. But with the coming of the Son of God in human flesh, the work of the angels is nearly done. They appear in large numbers at the conception and birth of Jesus because this is the time when they turn their authority over to man in Jesus Christ. One by one, the angels of Christmas throw their crowns down before the Lamb.  And as they cast their crowns before the incarnate Son, they cast them also before us, so that we can take our royal place beside the enthroned Son of David.

Isn’t this wonderful?  It is not our goal to try to escape this created world and our bodily existence.  For the Son of God has come to redeem this world and our bodily existence by sharing in our flesh and blood, body and soul.  He bears the curse, shedding His holy blood for us on the cross to fully redeem us.  And He carries us through the curse of death to the resurrection of the body and the life of the new creation to come.  Your human life has been greatly exalted by the fact that the Son of God shares in your nature.  No matter how ordinary or humdrum your life may feel, no matter how pointless it all may seem sometimes, Christmas means that your lives in the flesh are worth living, and the world in which you live is worth saving.

For heaven and earth are coming together; the incarnation and birth of our Lord is the guarantee of that.  We see it here today in the Christ Mass.  Heaven and earth are joined on the altar as the body and blood of our Lord Jesus, true God and true Man, are given to you for the forgiveness of your sins.  Here you get to be like the shepherds and join with angels and archangels and all the company of heaven in glorifying God.  For in the Sacrament of our Lord Jesus we behold His heavenly glory by faith, the glory as of the only begotten of the Father, full of grace and truth.

And we set our hearts on the Last Day when all of this will come to its goal and fulfillment, as it is written, “Then I, John, saw the holy city, New Jerusalem, coming down out of heaven from God, prepared as a bride adorned for her husband. And I heard a loud voice from heaven saying, ‘Behold, the tabernacle of God is with men, and He will dwell with them, and they shall be His people. God Himself will be with them and be their God. And God will wipe away every tear from their eyes; there shall be no more death, nor sorrow, nor crying. There shall be no more pain, for the former things have passed away.’” “The Word became flesh and dwelt among us.”  And heaven and nature sing.