We Wish to See Jesus

In today’s Palm Sunday Gospel, the Pharisees said to one another, “We are accomplishing nothing.  Look, the world has gone after Him!”  The Pharisees were frustrated.  They hated our Lord and were plotting to kill Him.  They were also plotting to kill Lazarus whom Jesus had just raised from the dead.  The Pharisees had seen how the crowds went out to meet our Lord, shouting, “Hosanna!  Blessed is He who comes in the name of the Lord!  The King of Israel!”  Everyone wanted to see our Lord who had raised Lazarus from the dead.  And this annoyed and frustrated the Pharisees who were so full of their own righteousness that they could not stand the grace of God that was revealed and given in Christ.

So, ironically enough, out of the mouths of the Pharisees comes a prophetic word.  “We are accomplishing nothing.”  That was most certainly true.  They were accomplishing nothing by their works before God.  Nor could they do anything to stop the mission of Christ.  Our Lord was firmly set upon His course to the cross.  The world, the devil, and sinful flesh could accomplish nothing against the salvation that He was bringing.

So it is written in Psalm 2, “Why do the nations rage and the peoples plot in vain? ...  The One enthroned in heaven laughs; the Lord scoffs at them.  Then He rebukes them in His anger and terrifies them in his wrath, saying, ‘I have installed my King on Zion, my holy hill.’”  God has a sense of humor.  He puts words of prophecy into the mouths of those who oppose Him.  The Pharisees speak truth even though they do not understand it.  There is nothing they can do.  The whole world will be drawn to this Jesus.  God the Father will establish Him as King on the holy hill of His cross.  The Father sits on His heavenly throne, chuckling and laughing at those who are frustrated by His gracious will.

Philip and Andrew come to Jesus with a request from these Greeks, “We wish to see Jesus.” But our Lord gives an answer which makes no mention of the Greeks and gives no indication that He will have an audience with them.  Rather, our Lord says something to indicate that soon He was going to die.  For it was only through His death that the Greeks would see Him properly.  Jesus says to Philip and Andrew, “The hour has come that the Son of Man should be glorified.”

Throughout the Gospel of John we are told that Jesus’ hour has not yet come, beginning with His very first miracle at the wedding at Cana.  But now the hour has come for the Son of Man to be glorified.  When our Lord speaks of His being glorified, He is speaking not first of all of His resurrection but of His suffering.  That is the hour for which He has come into this world.  It is the hour when the righteous anger of God against sin will be shown for what it is.  But it is also the hour that God’s love will be shown for what it is.  Strangely enough, the Son of Man, Jesus Christ, is glorified on the cross.

That is why Palm Sunday has an odd tension to it.  That is why this day is a day of restrained joy.  Jesus enters into Jerusalem as King; yet He rides not on a stallion but on a donkey colt.  We join in with the people's shouts of “Hosanna!”; yet we realize that He has come in humility to die.  This King’s glory is to be lifted up in love for the world on the throne of the cross, to lay down His life in this world that you might be lifted up to heaven.  Jesus displays His glory and majesty by being the Groom who will let nothing, not even death, stand in the way of rescuing and being with His bride, the Church. 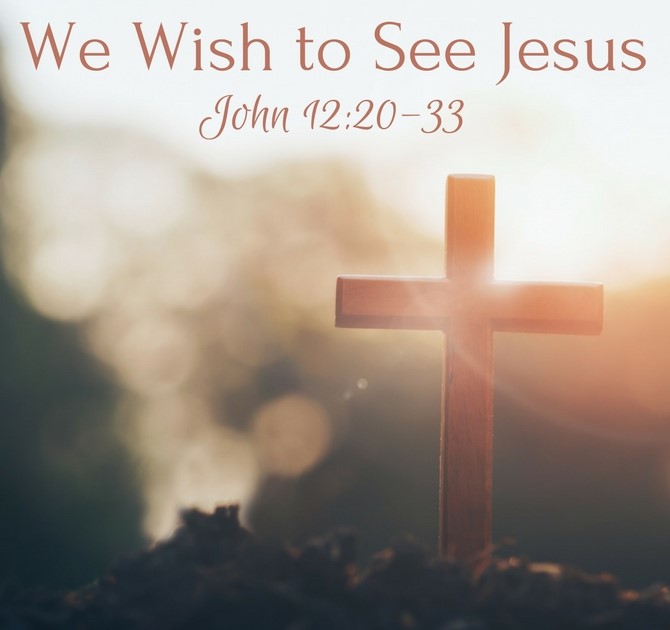 Therefore, Jesus rides into the holy city on a beast of burden, an animal that carries heavy loads.  For Jesus was to be like that donkey, as it is written, “Surely He has borne our griefs and carried our sorrows.”  Jesus’ soul was troubled here.  For all your burdens were placed upon His back.  He hauled all of your trespasses and transgressions to that hill outside the city walls, where they were dumped and crushed and obliterated and buried forever.  Jesus took it upon Himself, literally, to make things right for you in the sight of your heavenly Father.

The only-begotten Son of God is glorified not by being exalted but first by being humbled.  The power of God for our salvation is shown in the weakness of the only innocent man to walk this earth being executed as a criminal.  The wisdom of God is shown in the foolishness of having the one man who does not deserve to die dying in shame.

“We wish to see Jesus,” is the request.  And the answer our Lord gives is to raise up before us His cross.  For only there is He rightly seen as the Savior.  Nevertheless, this is not an answer that Philip and Andrew expect.  This is an answer beyond their experience.  Our Lord came to do what the sinful mind of man does not expect.  Our Lord came to crucify our experience in this fallen world.  Jesus came to be that kernel of wheat which falls into the ground and dies so that the old might be done away with and a new creation might come forth.  He is the kernel of wheat that falls into the ground and dies so that all might be drawn to Him.

The “death” of a seed is what brings life to the garden.  In much the same way Jesus’ death brings about life for you.  Jesus chooses not to remain a single seed.  He enters into the Garden of Gethsemane, where He anguishes over what is about to come upon Him.  His sweat falls to the dirt like great drops of blood.  Then, after being lifted up for our sins on the cross, Jesus is taken down to the earth, lifeless and limp.  He is buried in a grave, planted in a tomb which is located in the midst of a garden.  However, like good seed sown in good earth, that isn't the end of the story.  Jesus sprouts forth to life on Easter morning.  He produces a harvest of forgiveness and salvation for all who trust in Him.  Through the planting of the one Seed, Jesus, many more seeds are produced, countless people who through Him are brought from darkness to light, from death to life.  Only by first being planted in the depths of darkness and death does Jesus raise us with Himself to light and life.

And here’s what that all means for your day to day life: Living in the way of Christ, we are to die to ourselves in this world in order that we may share with Him in His resurrection.  Jesus said, “The man who loves his life will lose it.”  Love is not always a good thing.  The Pharisees are not without love.  They love their own lives.  The fallen nature of man loves to satisfy its own appetites.  The love of money, the love of power, the love of glory in this world and the praise of men–hearts set on these things are dead to God.  The sinful nature loves to have its way and hates to suffer anything.  This world is full of those who are literally loving themselves to death.

But, Jesus said, “The man who hates his life in this world will keep it for eternal life.”  Hate is not always a bad thing.  To hate what is contrary to the will of our most gracious God is a holy hatred.  Such hate is the gift of God.  Psalm 97 says, “The Lord loves those who hate evil; He preserves the lives of His saints; He delivers them from the hand of the wicked.”  The saints of the Lord are those who are freely given the righteousness of Christ through faith, those who rely not on their own goodness but on His alone.  The wicked from whom the Lord preserves His saints are the devil, the world, and even our own sinful flesh.  To hate the sin which still hangs around our necks is a blessing from God.

Our whole Christian life in this world is a constant return to our Holy Baptism where the Holy Spirit leads us to hate what God hates and to love what God loves.  No one can go through this life without hating some things and loving other things.  The difference between life and death is in what we hate and what we love.  The Pharisees loved their lives.  They loved their acts of righteousness, and they hated our Lord and the righteousness He freely brought to this world.  The Lord grant that we may hate our lives in this world and love Him who is our righteousness, life, and salvation.

Our Lord had many admirers.  There were many who were fascinated by His words and eager to see the marvelous signs He performed.  Perhaps these Greeks in the Gospel who asked to see Jesus were like that, people who would admire Jesus without really knowing or caring about why He had come.

“Sir, we wish to see Jesus.”  And our Lord replies, “I’ll see you at Calvary.”  That is where you are to look.  And where is it that you may behold Christ the crucified but in the Sacrament of the Altar?  For the Lord who came in His flesh and blood to Jerusalem comes also to you now in His flesh and blood to give you the forgiveness of sins which He purchased on the cross.  He “saddles” the bread and wine and rides right to where you are, that He might unite you to Himself in holy love and fill you with His life.  So it is that before receiving the Sacrament today, you will sing some of the very same words that were shouted to Jesus on the first Palm Sunday, “Hosanna in the highest!  Blessed is He who comes in the name of the Lord!  Hosanna in the highest!”  Let us then hold forth our own cross-shaped palms today as symbols of our worship and faithful reception of Christ our King.  For it is Christ’s glory to come into the holy city to give His life for you that you may live.

(with thanks to Michael Hill)