Today's parable has a surprise ending. You’ve heard the parable before, so perhaps it doesn’t seem so striking.  But imagine you’re hearing it for the first time.  There’s a manager who has been cooking the books. He’s been caught, and the CEO has told him to clean out his office. But instead, the manager quickly alters the records even more, so that the people who owe the company money get a big reduction. He’s hoping that the people he helps will in turn help him once he’s out on the street. 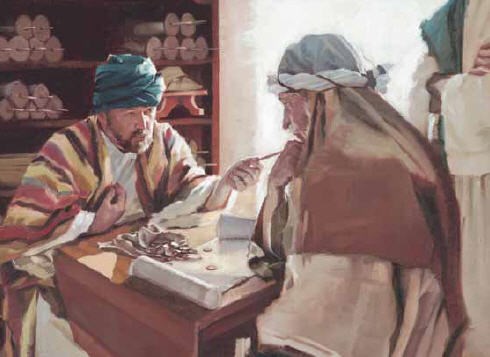 Now right at that moment, when the evil person has been exposed, many of Jesus’ parables will conclude with condemnation, something like, “Bind him and cast him into the outer darkness, where there is weeping and gnashing of teeth”; or, “Assuredly I say to you, that man will be cast into prison and not get out until he has repaid the last penny.”  We expect to hear an ending to the story that promises justice. But instead, Jesus surprises us with a radically different kind of ending: the embezzling, wasteful, dishonest manager gets praised. So what’s going on?

First, we have to remember that many of the things Jesus says are purposely surprising and strange. The strangeness is precisely where Jesus makes His point, that the kingdom of God doesn’t operate according to our expectations or rules. In the sayings of Jesus, camels go through the eyes of needles, armies go to war over snubbed dinner invitations, and bridesmaids get locked out of wedding receptions.

Jesus obviously isn’t endorsing cheating. So what is He teaching us with this strange parable? First, we have a problem with money.  Jesus doesn’t aim this parable at con-men and book-cookers. He aims it at you. You may say, “I’ve never embezzled money; and if the IRS audited me, they would find I’ve paid the taxes I owe.” But the parable isn’t really about cheating. It’s about the problem of having a life and a heart oriented toward the service of money.

Everything you have, no matter how hard you’ve worked for it, you wouldn’t have it unless God had given it you.  Even more, God has given you what you have for a purpose. He’s entrusted it to you to manage it for Him, and this parable teaches us that we need to be faithful to that trust. “If you have not been faithful in the unrighteous mammon, who will commit to your trust the true riches?” Mammon means wealth, property, food, provisions.  Jesus calls the mammon unrighteous not because it’s evil in itself, but because of the power it can hold over us. And He concludes by telling us we can only have one master. “You cannot serve God and mammon.” “No servant can serve two masters.”

So what has mastery over you?  What takes precedence over church and God’s Word in your life?  What is it that you wouldn’t be willing to give up if the Lord asked you to?  If you’re not willing to give it up, you’re not recognizing it as something that actually belongs to God.  You think it’s your own and not something He has given you to manage for your necessities and the good of others and His glory.

There’s actually something incredibly freeing about being a steward and not the Lord–and not just when it comes to money, but everything. We might sometimes prefer to live in a different time or different circumstances. But realizing that God has put you right where you are in just the situation you are in, then you can embrace your various vocations in life as callings from Him, even if they involve crosses or difficulties. You can say, quite truthfully, “God has put me here, in 2020, in this country, this church, this family, with these neighbors, with this work to do.”

When the unjust steward is called before the rich man, he’s told, “Give an account of your stewardship.” That’s the command that will be put to each one of us, too.  The Lord says, “I give you this money, this job, this spouse, these parents, these children. Do not worry about what some other person has; do not covet your neighbor’s house, or wife, or property. Be faithful where I have put you as a steward, a manager of the things I have entrusted to you.”

This call to give an account is a call to repentance for all of us, who have fallen short in our stewardship of God’s gifts.  Let us then, first of all, turn back again to doing what the Lord has given us to do in our callings.  Jesus says, “The sons of this world are more shrewd in their generation than the sons of light.”  In other words, worldly people are single-minded in achieving their goals.  If they can be so very passionate about things that will pass away, how much more should we be about eternal things!  So, Jesus says, “Make friends for yourselves by unrighteous mammon, that when you fail [and die], they may receive you into an everlasting home.”  The unjust steward, selfish though he was, lived with an eye toward the future.  That’s also how we should be, but in a selfless way, living with an eye toward the eternal dwelling place that God has already prepared for us purely by His grace in Christ. We are given to use the things of this world, we are to put unrighteous mammon to righteous purposes, for the good of Christ’s church and our fellow man.  This is how everlasting friends are made, those who believe and are baptized, the ones who will share our everlasting home.  You cannot serve God and mammon.  But can make your mammon serve God.

And then second of all, today’s Gospel is a call to faith.  It’s worth noting that this parable comes immediately after the Parable of the Prodigal Son, and they carry a similar message: “It’s time to come home. The Father forgives. He is merciful. Do not delay.”  That’s really the key point of this parable: God is lavishly generous. God’s character is mercy, love, generosity.

Think about it.  Isn’t it strange that the unjust steward is only losing his job? You’d expect him to be thrown into prison, humiliated. But he’s being treated gently. This tells us something about the rich man, that he’s merciful. And the steward knows this and uses it. The debtors quickly accept a reduction of their payments, a hundred measures of oil is cut to fifty; a hundred measures of wheat is cut to eighty. The steward is banking on the rich man honoring these deals, even though they’re unauthorized.  That’s how our God is.  He is generous toward us for the sake of Christ.  He authorizes all of our debts as having been paid for by Jesus’ sacrifice on the cross.  And He praises those who stake their whole lives and their whole future on His mercy in Jesus.  That’s true wisdom and shrewdness.  Both with the unjust steward and with us, the Lord praises faith in His generosity.

The steward in the parable is very much like the prodigal son.  They both wasted the possessions given to them.  They both put their trust in the mercy and grace of those whom they had wronged.  They both came to learn that the only way to live is to be to be generous, to be merciful, to forgive debts, to use what you have for the benefit of others instead of wasting it on yourself.

That’s who God is. He gives. He’s generous. Our Lord Jesus allowed Himself to be called to account before an unjust judge, Pontius Pilate.  He stood in our place and made sure that our debts were not just reduced by cancelled entirely.  He has taken responsibility for your messed up ledger, and in its place He has inscribed your name in the Book of Life.  And you know that because He has given Himself to you, His Holy Spirit in baptism, the body and blood of Christ in Holy Communion.  The oil and wheat of the sacraments are your true treasure.  These are the things that give you an eternal home.

So let us repent of our mismanagement of God’s gifts.  And let us especially turn back to Him who is patient and merciful toward you.  Believe His promises in Christ.  He is faithful, and He will keep them.