The Time of Your Visitation

The key saying of our Lord in today’s Gospel as He weeps over Jerusalem is this: “You did not know the time of your visitation.”  Our Lord visits His people.  The God who fills all of time and space comes to His people in particular times and places to deliver and redeem them.  Just like when beloved family or friends come to visit from out of town, and we don’t want to miss the opportunity to be with them in the flesh, so we should be careful not to miss the time when our Lord is here for us in the flesh.

However, in our sin we sometimes become rather casual about the Lord’s visitation.  We take it for granted that His coming to us in preaching and the Sacraments will always be available.  “I’ve got so many other things to be doing on the weekend.  Church will always be there.”  If there’s anything you should be learning from the current COVID situation, it’s that that’s not necessarily the case.  There are members of our church right now who have been cut off from receiving Holy Communion for months, not by their own choice–that’s bad enough–but because they’re physically not allowed because of community regulations or facility rules.  I’ve got stories to tell about the ridiculous application of these rules prohibiting spiritual care to shut-ins, but I’ll restrain myself.  The point is, don’t take it for granted that church is always going to be here the way it has been.  Whether it’s because of a health crisis, or whether it’s because of our culture’s growing hostility to the Church and God’s Word, with all the legal and financial and social pressures that brings, we shouldn’t assume anything.  Jesus promised that the gates of hell will not prevail against the church, and that is most certainly true.  But that doesn’t mean that His visitation will always continue to be the same in every place. 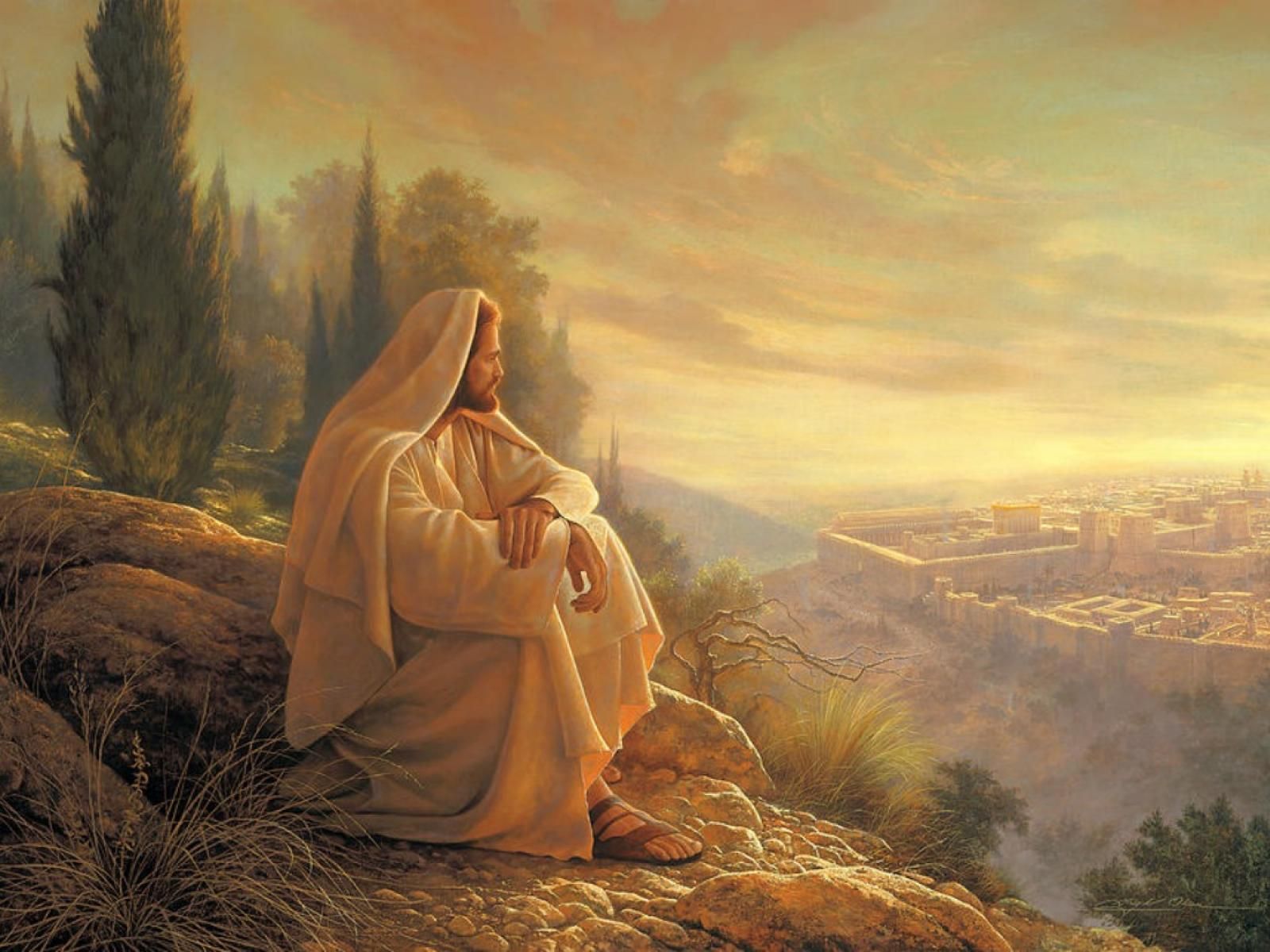 Remember what Martin Luther said to his countrymen about the Gospel, how it is like a passing rain shower.  Luther said, “Let us remember our former misery, and the darkness in which we dwelt. Germany, I am sure, has never before heard so much of God’s word as it is hearing today . . .  If we let it just slip by without thanks and honor, I fear we shall suffer a still more dreadful darkness and plague.  O my beloved Germans, buy while the market is at your door; gather in the harvest while there is sunshine and fair weather; make use of God’s grace and word while it is there! For you should know that God’s word and grace is like a passing shower of rain which does not return where it has once been. It has been with the Jews, but when it’s gone it’s gone, and now they have nothing. Paul brought it to the Greeks; but again when it’s gone it’s gone, and now they have the [Muslim] Turk. Rome and the Latins also had it; but when it’s gone it’s gone, and now they have the pope. And you Germans need not think that you will have it forever, for ingratitude and contempt will not make it stay. Therefore, seize it and hold it fast, whoever can; for lazy hands are bound to have a lean year.”

Note there that gratitude is the key thing; not taking God’s Word and the Holy Sacrament for granted but being thankful for it and treasuring it.  Last week we had a church member who was away for many months who was finally allowed to come back to divine service.  Sitting in the pew before the service, she expressed how thrilled and thankful she was just to be able to be here in the Lord’s house.  If we would see things rightly, that would be our constant attitude.  Remember that in OT Israel there was for a time what the prophet Amos called “a famine of the Word.”  And Jesus Himself said in John 9, “I must work the works of Him who sent Me while it is day; the night is coming when no one can work.”

Jesus knew that the night, the darkness was going to come upon Jerusalem.  For they did not know the time of their visitation, when God Himself visited them and walked among them.  Just forty years after this Gospel in 70 A.D., Jesus’ words were fulfilled.  Jerusalem was attacked and laid siege by the Romans.  Hundreds of thousands were killed or died from famine and plague.  Those not worth anything to the empire were executed, adult and child alike.  The strong men were kept alive and forced to work in mines or become slaves.  The Jewish historian, Josephus, wrote that 97,000 young men were taken away as slaves.  And the temple was utterly destroyed and laid waste.  All that is left of the temple still today is the wailing wall.

This was the judgment of God.  The Romans were His instrument in executing the sentence.  For Israel had rejected the Messiah in His humility and lowliness.  It was their day, and they missed it.  The things that made for their peace with God were hidden from their eyes by their own unbelief and desire for glory.  The weeping of God eventually becomes the judgment of God for the self-righteous and the unrepentant.  To reject His visitation in mercy is to invite His visitation in vengeance.

Let this be a clear and sobering call to repentance for us today.  For what happened to the Jews in Jerusalem in the 1st century is a miniature picture of what will happen to all the unbelieving world on judgment day.  Consider, then, how things stand with you.  Are you more religious about politics or sports than you are about Christ and His Word?  Are you more passionate about social issues than you are about people believing in Christ crucified to save sinners?  Are you relying on your own good living to bring you into God’s favor rather than Christ alone?  Are you looking for God to show you impressive signs rather than trusting in His humble but sure words and supper?  Are you like those who bought and sold in the temple, using religion as a way of getting God to bless you financially?

Turn away from all of that, and turn to Him whose heart still weeps out of love for you, His people.  Trust in Him who continues to cry out, “If you would know, especially in this your day, the things that make for your peace!”  Christ Himself is your Peace.  He is the One who brings reconciliation between you and God; He is the One who gives you the peace that passes all understanding.  This is the day of your visitation, as it is written, “Behold, now is the acceptable time; now is the day of salvation.”  This is the moment in which Christ is coming to you in His Gospel sounding in your ears.  Believe in Him; trust in what He has done; seek His righteousness.

For our Lord has truly cleansed the temple.  When Jesus drove out the moneychangers in righteous anger and purified the temple as a house of prayer, that was a sign of what He was about to do at Calvary.  For there on the cross Jesus Himself experienced the righteous anger of God against the world’s sin and drove it out in the temple of His own body.  Jesus made Himself unclean in your place.  He took all of the greed and the self-righteousness and the pollution of every sin that you’ve done or that has been done to you, and He made it His own dirty mess.  By His holy sacrifice He took it away from you and cleansed it from you forever.

Jesus had said of His body, “Destroy this temple, and in three days I will raise it up.”  Though the temple in Jerusalem remains destroyed, Jesus could not remain in the grave.  He is now bodily raised in glory as the new and eternal dwelling place of God for you.  Jesus is your temple.  The risen body of Christ is full of holiness and cleansing and life.  Baptized into Him, those things are all yours.  You are now members of the body of Christ.  And therefore you are the temple of Christ’s Spirit, who dwells in you through your baptismal faith. You are safe from divine judgment.  For you are in Him who took the judgment for you.

So open your eyes; wake up to what the Lord is doing!  He is coming to visit, both now and on the Last Day.  That is bad news for the unrepentant.  But for all of you who believe, it is the greatest good news.  This is your day; this is the time of your visitation!  Don’t miss out.  Here are the things that make for your peace, the body and blood of Christ, offered up for you for the forgiveness of your sins, for your peace, for your rest, for your restoration to the Father [We rejoice that  Elizabeth and Madelyn and Harper will be receiving this gift for the first time today.]  And so we say with Zechariah, “Blessed be the Lord God of Israel, for He has visited and redeemed His people” (Luke 1:68).  May the Lord always grant you attentive ears and open eyes to see His visitation, so that by His grace you may dwell eternally in the new Jerusalem above.