The Least of These My Brethren

When we hear the Gospel reading for today, the natural reaction of our Old Adam is to take it as a set of guidelines for what we should be doing so that Jesus will allow us into heaven.  On one side of the judgment seat you’ve got those who did charitable works toward Jesus, even though they didn’t know they were doing it for Him.  And on the other side you’ve got those who didn’t do charitable works toward Jesus, and they likewise were unaware of Jesus’ presence in these brethren who were hungry or sick or naked or imprisoned.  The first group is called the righteous and goes into everlasting life.  The second group is called the cursed and goes away into everlasting punishment.

And so our fallen human nature logically concludes that we’ve got to get doing more charitable deeds.  We’ve got to get on the ball and do more to help the poor and the needy so that we can be counted worthy to enter heaven.  It is a constant temptation for us to take the Word of God and turn it into a list of requirements that we can fulfill so that we can make ourselves right with God.  Inherent within us is this false opinion of the Law that we can save ourselves by our own goodness and acts of love.  And so we keep looking for spiritual checklists that we can fulfill: feed the hungry–check; clothe the naked–check; visit the sick–check.  There, I’ve done my part; I’ve made myself a true Christian now.

But that isn’t putting your faith in Christ; that’s putting your faith in yourself.  That’s not relying on God’s goodness and love, that’s relying on your own goodness and love.  And to do that is contrary to the Christian faith.  Now let me be clear: we should be helping the poor and needy and doing charitable works toward our neighbor.  The Fifth Commandment requires that we help our neighbor in every bodily need.  We should do better about tending to the needs of others and not being so self-absorbed.  But the key point here is that we shouldn’t rely on how well we’ve done that to save us, for the Law always brings judgment.  We never keep it perfectly as we should.  Even your best efforts to show love to your neighbor fall short.  That’s not what’s going to get you into heaven.

In our attempts to keep the Law, we often forget the first and most important commandment:  that we are to have no other gods, that we are to fear, love and trust in God above all things.  If you are doing good works in order to gain eternal life for yourself, is that really loving God?  If you do deeds of charity so that you can feel good about having fulfilled your responsibility, is that really trusting in God?  Or, under a cloak of goodness is there, in reality, a lack of faith in God, an attempt to manipulate God to get what you want?  Don’t take today’s Gospel reading as a listing of the things you’ve got to do to earn your spot at Jesus’ right hand.  For that is precisely the attitude of those on His left. 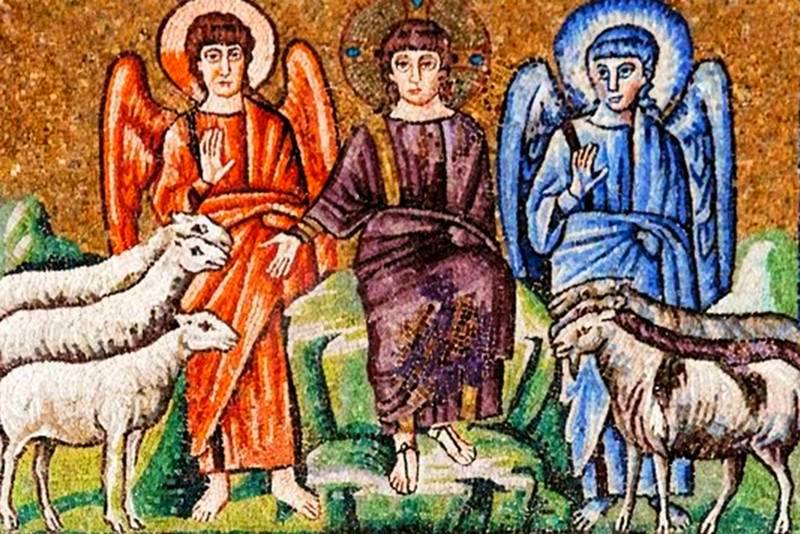 This Gospel is not so much about good works as it is about faith in Christ.  The focus is on Him and what He has done.  For notice what Jesus says, “Inasmuch as you did it to one of the least of these My brethren, you did it to Me.”  Jesus isn’t just talking about any old charitable deeds here, but ones done toward His brethren.  So just who are the brothers of Jesus that are referred to here?  St. Matthew would have us understand that these brethren are in fact the preachers of the Gospel.  And the difference between the sheep and the goats is whether or not they received Jesus’ brethren and believed the Gospel that these men proclaimed.

In Matthew’s account of the resurrection of Jesus, the angel at the tomb said to the women, “Go and tell my brethren to go to Galilee, and there they will see Me.”  “My brethren” there refers to the 11 apostles, the 12 minus Judas.  At Galilee, Jesus gave the command to these 11 brothers of His, “Go and make disciples of all the nations . . .”  They were to do this by baptizing and by teaching His words.  Matthew 24 states that this Gospel of Jesus will be preached to all the nations, and then the end will come.  In today’s Gospel reading the end is described as “all the nations” gathered before Christ. “The brethren,” then, that Jesus refers to are clearly the apostles whom Jesus sent, and also all those after them who are in the apostolic office of the ministry, those whom Christ has given to baptize and preach the Gospel in His name in all the nations until the close of the age.

Already in Matthew 10 Jesus said to the disciples whom He sent out to preach, “He who receives you receives Me.”  Jesus had bound Himself to them so that their words were His words.  To welcome them was to welcome Christ Himself.  In fact, Jesus said, “Whoever gives one of these little ones [the least of these My brethren] only a cup of cold water because he is My disciple, I tell you the truth, he certainly will never lose his reward.”  That act of giving a cup of cold water was noteworthy not because it was a good work that merited anything but because it was a sign of faith, that the hearer believed the Gospel of Jesus which His brothers, the apostles, had spoken.

Jesus’ still says to His preachers and His missionaries, “He who receives you receives Me.”  For such men are called and ordained by Christ to be His representatives and ambassadors.  You know that when a pastor says, “I forgive you all your sins . . .” he is not speaking for himself but in the stead and by the command of Christ.  When he says, “This is My body,” that is not his voice but Christ’s.  The same thing is true of holy baptism.  Martin Luther said, “To be baptized in God’s name is to be baptized not by men but by God Himself.  Although it is performed by men’s hands, it is nevertheless truly God’s own act.”  The fellow whom Jesus uses to do that is really secondary; he’s covered up in robes to show that he represents not himself but the Lord.  To receive a brother of Jesus, then, a preacher of Christ, is to receive Christ Himself–not because of the merits of the minister but because Christ is truly present in the ministry of His words and sacraments for your salvation.

That the brethren would be sick or hungry or naked or in prison was a very real possibility, particularly in the days of the apostles, though it certainly remains the case in every generation of this fallen and rebellious world.  Jesus told the 12, “I send you out as sheep in the midst of wolves.”  The Apostle Paul ended up in jail several times for his preaching.  He spoke of sometimes having plenty and sometimes being in want.  But He also gave thanks to God for those who received the Gospel and believed it faithfully, churches like the congregation in Philippi who on more than one occasion sent material aid to provide for his necessities.

So, you see, this passage is chiefly about those who embrace and those who reject the Gospel of Christ.  It’s not primarily a call to do works of mercy, though we very much need that reminder, too.  It’s ultimately about faith in the Gospel of Christ and the concrete signs of that faith, be it in a missionary or a congregational setting.  This faith is brought to perfection on the Last Day, when the sheep seem blissfully unaware of the things they have done.  For faith focuses not on one’s own deeds, but on the deeds of Christ.  “When did we do all these things?  All we did was believe the Gospel!”  Faith forgets itself that it may forever remember and retain Christ and His eternal gifts.

Our Lord Jesus won those gifts for you by becoming needy in your place.  He was weak and hungry in the wilderness.  On the cross He said, “I thirst.”  He Himself took your infirmities and bore your sicknesses in His own body on the tree.  He was treated like a stranger amongst His own people.  He put Himself into the bondage of your hellish prison so that He might burst the bars of your captivity from the inside out by His mighty resurrection.  Through Christ you are set free from death and the devil; you are released from your sins; you are cleansed and forgiven in Him.  He made Himself to be the least of the brethren so that you might receive the greatest of His mercies.  It is He who showed the truest and highest charity, paying with His own blood to redeem you, that you might live in everlasting righteousness, innocence, and blessedness.  For Christ is risen from the dead; He lives and reigns to all eternity as your King and your Savior.

On the Last Day Jesus will certainly say these very words to you who believe, “Come, you blessed of My Father, inherit the kingdom prepared for you from the foundation of the world.”  The Father has indeed blessed you by giving you the new birth of water and the Spirit into His heavenly family.  You are now His sons and daughters in Christ.  All that He has is yours.  Christ has given you to share in His everlasting inheritance.  And like any inheritance, it’s not yours because you’ve worked for it, but simply because you’ve been adopted into the family.  In fact, this inheritance was being prepared for you from the beginning of creation, before you were even around.  It’s all a gift, given to you through the merits of Christ.  Believe that Gospel.  Trust in that promise.  For just as Jesus will come on the Last Day with all His holy angels, so also He is here even now with angels and archangels and all the company of heaven to bring you His kingdom in the Sacrament of His body and blood.  Come, you blessed of the Father, receive the kingdom; receive the King.