The King of the Jews

“Where is He who has been born King of the Jews?”  That is the question of the Wise Men from the East.  It’s important to note that these Wise Men, these Magi, were probably not worshipers of the true God prior to this time.  They were royal counselors and advisers.  And their title as Magi suggests that the wisdom they offered to the king came at least in part from occult magic, astrology, the seeking of power and knowledge from various sources other than the Word of God–“reading the tea leaves,” reading the stars, and other pagan things. 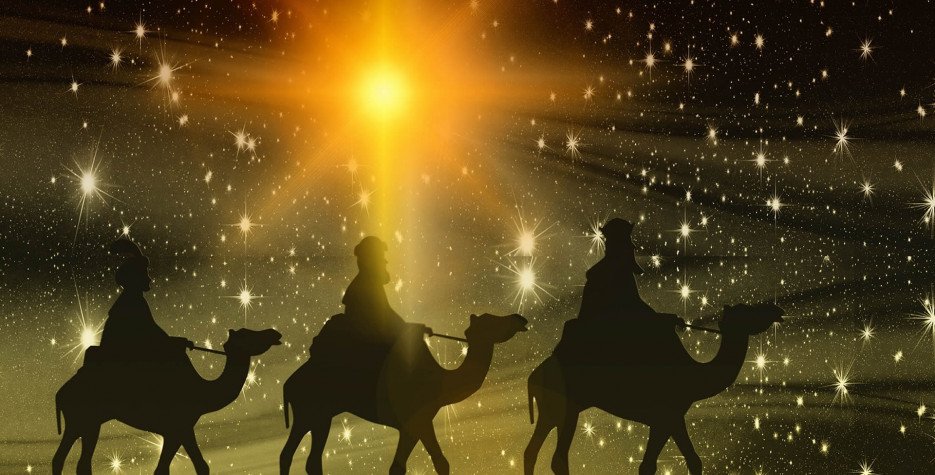 Of course, they would have had written wisdom, too, and among that wisdom was portions of the Old Testament Scriptures.  For remember where these Magi came from, from the East, from Babylon and Persia east of Israel–the place where the Israelites had been carried away captive as exiles centuries earlier.  Several of those Israelite captives became counselors to the king, Wise Men of sorts–people like Shadrach, Meshach and Abednego who wouldn’t bow down to Nebuchadnezzar’s golden image, or Daniel who was thrown into the lion’s den for continuing to pray to the Lord against the official edict.  And those Jewish Wise Men would certainly have brought with them not only the practice of their faith but scrolls containing the words of Moses and other parts of the Old Testament.

The Jews returned to Israel a few decades later.  But the Gentile Magi surely would have retained copies of those words over the years, such as this prophecy in Numbers 24, “A Star shall come out of Jacob, a [royal] Scepter shall rise out of Israel. . .”  Now the Magi probably only understood that to be about the birth of an important earthly king.  But when this heavenly body appeared at the time of Jesus’ birth, God by His grace still used their imperfect and muddled wisdom to lead them to seek out Him who is Wisdom in the flesh, the King of the Jews, Christ our Lord.

And that’s one of the first points that we should take out of this Gospel today–by the grace of God, He draws even people like this to Himself: semi-pagan astrologers and Magi, people who are enmeshed in false belief and false religion, and He calls them away from all of that to the Truth. He draws Gentiles like us who fall so easily into superstitious thinking, we who are tempted to look for guidance and power in all sorts of things other than God’s words, we who love to get enmeshed in mystical and spiritual speculation about the spirits of the dead and the supernatural.  Even people like us, with our muddled hearts and minds, God still draws to Himself through His Word, in spite of ourselves, because of His grace and mercy.  It is that grace and mercy that caused the Lord to become flesh in the first place to redeem us and save us, to lead us into all truth.  This epiphany of Jesus to the Wise Men, then, is good news for us, for it shows Jesus to be the fulfillment of Simeon’s words, “a Light to bring revelation to the Gentiles, and the Glory of God’s people Israel.”

You can tell that the Magi were thinking in terms of an earthly king, because the first place they go in Israel is to the capital city, to Jerusalem.  “Where is He who has been born King of the Jews?”  That’s where they expect to find Him.  But the Messiah King is not one who comes surrounded by the finery and the glories of the capital.  He comes rather in the lowliness of the humble village of Bethlehem.

Our fallen nature thinks God is to be found in places of power, that true religion is about that which brings health and wealth and success and happy feelings.  But that’s not where Jesus is at.  Herod has all that.  Jesus, on the other hand, ends up having to flee from Herod’s murderous scheme, carted by Joseph and Mary to exile in Egypt for a time, living an ordinary and common life for us.  The life of the true and eternal King is marked from the beginning by suffering and the cross.  That’s where Jesus is, not surrounded by earthly glory, but robed in humility for us.  True religion still today is also marked not by political power and victories, but by this humility of Jesus.  The church is not dependent on what happens in the capital but on what happens right here in divine service.

It’s very important to note in this story the difference between the Gentile wise men and the Jewish priests and scribes.  On the one hand, the Jews who possessed the Scriptures in their fullness and knew the prophecies of the Messiah were greatly troubled at the thought that the Messiah was born.  It says here that King Herod and all Jerusalem was troubled by this news.  That seems a little strange, doesn’t it?  You would think they might be glad, joyful.  You would think that they would want to personally escort the wise men to Bethlehem so that they could see for themselves.  Instead, they’re more concerned about how this might upset their lives and the political structure.  Instead, they quote the Scripture they know so well and stay home.

This still happens today.  Far too many people think that if you just learn enough facts from the Bible, or learn enough morality from the Bible, then you're all good.  You can stay at home with your private spirituality and forsake the presence of Christ in the flesh in His gathered Church.  But such people are sorely deceived; they are not Christian.  We also must guard against priding ourselves on our Bible knowledge or our good living rather than glorying in the One whom the Bible is all about, our Savior Jesus.  We must be careful not to let God’s Word simply become window-dressing in our lives lest we stop praying and meditating upon it.

The Magi are our example here.  They receive the Word of God properly, in such a way that they are moved to seek out Christ in the flesh.  The Magi rely on the written Word, but they are not content with the Bible for its own sake.  They cling to it for the sake of Christ to whom it leads them.  That is always the purpose of the Word, to lead us to the Word made flesh, Jesus.  He is there for us, too, concretely and tangibly in the preaching of the Gospel and the Sacraments, no less so than He was for these Wise Men.

“Where is He who has been born King of the Jews?”  That title, “King of the Jews” might well spark some connections to Holy Week in your hearts and minds.  It’s actually a title that only shows up in two places in the Gospel–here at the beginning of Jesus’ life, and later at the end of Jesus’ life.  And the two situations are parallel. The Jewish King Herod was envious and tried to protect His power when Jesus was born, seeking to have Him killed; He ordered the deaths of all the boys two years old and under in Bethlehem.  So also in the Passion narrative, we hear of how the Jewish leaders handed Jesus over to Pontius Pilate because of envy.  They, too, wanted to protect their position and political power.  In both cases it’s the Gentiles who see Jesus more clearly as He is.  Pilate finds no fault in Him, and Pilate’s wife even calls Jesus a just Man.  But in the end, Pilate caves to the pressure, and in fulfillment of God’s will, perhaps to mock the Jewish leaders, He places over our Lord’s head the inscription “This is Jesus, the King of the Jews.”

So near the end of Matthew’s Gospel, we are given a crystal clear answer to the Magi’s question at the beginning of Matthew’s Gospel.  “Where is He who has been born King of the Jews?”  He is there, the humble Child, God in the flesh, the light of God’s love broken into the darkness of our sinful world.  And above all, He is there on the cross, with the inscription over his head declaring it.  He is the King who is given gold for His royal nature but who chooses to wear the crown of thorns.  He is the King who is given incense, used at the time of prayer and sacrifice, who answers our prayers by being the sacrifice for the sins of the world.  He is the King who is given myrrh, a spice used for Jesus’ burial in the grave, which He would conquer in His victorious resurrection.  This Jesus, the King of the Jews, has come to redeem all people–wise men from the east, Roman conquerors from the west, Jew and Gentile, you and me.

God grant that His Word would continually accomplish its purpose of leading you to the Word made flesh in this new year, that with the Magi we might come and kneel before Jesus week by week as He gives His gifts to us, His true body and blood offered up for the forgiveness of sins.  For just as the Wise Men returned home by a different path, walking along a new way, so God gives you also to return by a different path than the old ways of this world.  You are given to return home by Christ Himself, for He is the Way and the Truth and the Life for you.  Behold your King!