We live in a culture right now which is big on the need for penance and making atonement, but not very big on the idea of forgiveness.  What I mean is this: If an athlete or a celebrity or public figure has ever said or done something that is now considered offensive or unacceptable–say on the topic of gay marriage or transgenderism or social justice–they must grovel and apologize and show how they’ve become enlightened by the new “progressive” dogma.  But even then, after they’ve tried to atone for themselves before the media high priests, they’re often still considered to be on the outside, permanently tarnished by their transgression.  You may have heard of “cancel culture,” where such transgressors are blacklisted and excluded from being heard.  To put this all another way, the world today demands confession for what it considers to be sin, but it resists absolution; it is not very inclined to forgive and let go of sin.

This is a serious problem, not only in the world but sometimes also in our own relationships.  Too often we are like the older brother in today’s Gospel parable, wanting those who have done wrong, who have been prodigal and morally reckless, to have to pay a lasting price, and to lose their status.  We tell ourselves that’s the righteous thing.  But in truth it’s often a subtle tool we like to use to justify ourselves, to indulge our self-righteousness, to boost our own status. Like the world, we, too, stress the need for people to confess, to say they’re sorry.  But we don’t always find it very easy to say “I forgive you,” to absolve people and release them from their sin. 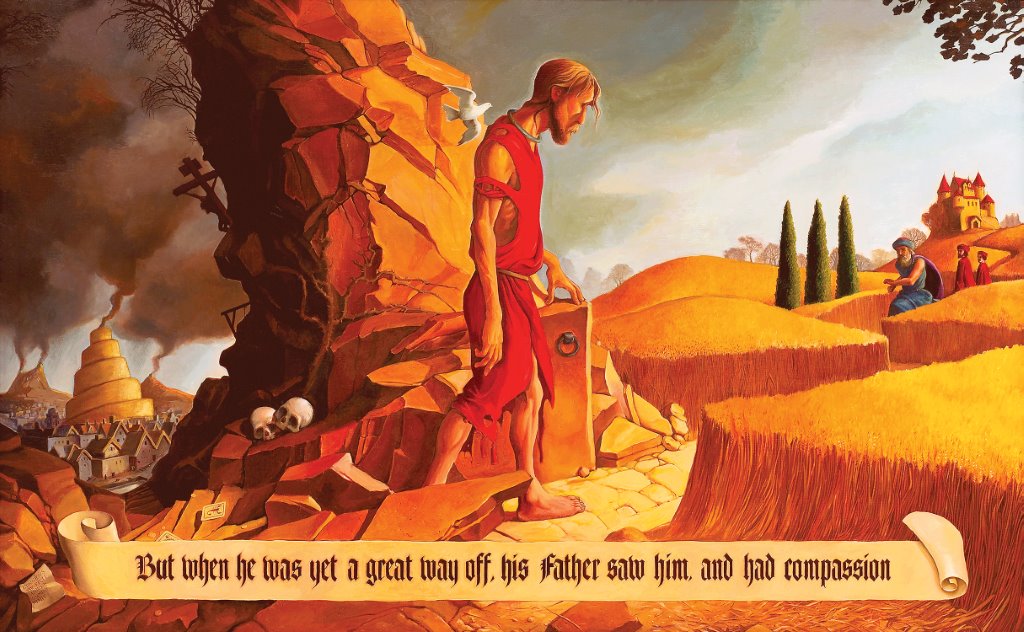 But that’s not at all the way it is with the father in today’s parable.  He is all about the absolution.  The confession isn’t the big deal, it’s the forgiveness and the mercy that runs the show.  Did you notice how the father actually cut short the prodigal son’s confession?  The younger son had his confession speech all prepared.  And it was right as far as it went.  He had sinned against his father grievously.  He wasn’t worthy to be called a son any longer.  He did deserve to lose his status and to be treated like a hired servant.  And the same is true for all of you.  Every sin is a little turning your back on your heavenly Father.  Every time you stray from his commands, you are leaving behind who you are as a child of God in His household.

But when the younger son returned home and it was actually time to speak the confession, the father didn’t even let him finish.  The son didn’t even have a chance to say the part about being made to be like a hired servant.  Imagine if I cut you all off right in the middle of the confession at the beginning of the service because I was so eager to get to the absolution and the “I forgive you” part.  In a very real way that’s what the father does here.  His heart and mind are set on the joy of having his son back, of celebrating the absolution.  The father’s true delight is to pour out his love on his child.

This is the way it is for you with God.  Confession is important; a penitent and humble heart is what He desires.  But the Lord doesn’t forgive you because you’ve done the good work of confessing.  He forgives you because He is good and merciful.  He wants your heart to be penitent so that it’s open to receiving the great lovingkindness He desires to pour out on you.  He wants you to share fully in the joy of His household.

You can see how much the father wants that by the way he behaves in the parable.  He hadn’t written off or forgotten about his son.  Instead, we see a father who’s still longing for his son to return.  He’s waiting, looking down the road.  It says here, “But when (the younger son) was still a great way off, his father saw him and had compassion, and ran and fell on his neck and kissed him.”  Dignified men don’t run, but the father was compelled to do so by his love, going out to bring and welcome his son back, even before the son could say a word.

It’s precisely that love of the father that drew the son to come home in the first place.  He certainly underestimated his father’s response.  But what gave the prodigal son hope that he might somehow be received back was the goodness and kindness of the father that he remembered.  In the same way, it written in Romans 2 that the goodness and kindness of God leads us to repentance.  Knowing the love He has for us in Christ allows us to honestly acknowledge the full depth of our fallen condition, and it creates in us the desire to come home and to be rescued from our prodigal and prideful ways.

The father’s forgiveness is not conditional.  There’s no probationary testing period for the son.  Instead, the father immediately puts a distinguished robe on him.  He gives him the family ring with all the authority that brings with it.  He puts sandals on his feet, for only the servants would be barefoot.  And the father throws a party, for he wants to celebrate that his son who was “dead” is alive again.

Of course, when you hear of someone being dead and alive again, you can’t help but think of Jesus, right?  And you should!  For when it comes right down to it, Jesus is the real prodigal son in this parable.  God the Father wants to have you with Himself so much that He made His own Son to be like this younger son.  Consider what it says here.  It says that the father gave to the younger son of his livelihood, or more literally his “substance”–just as we confess in the Creed that Jesus is of one substance with the Father.  Then the Son of the Father goes to a far country, which is to say, the Son of God descends to earth and becomes man for us.  Here He blows His wealth and His substance consorting with tax collectors and sinners and the likes of us.  Jesus is prodigal and beautifully reckless in the way He dishes out His grace and mercy toward us.  He loses it all for you, dying in your place as if He were the rebellious sinner, to win your forgiveness.  Then the Son of God arises from the grave and returns to His Father, who exalts Him to His right hand, and gives Him the name that is above every name, rejoicing that He who was dead is alive again, that He who was lost for a time to the grave has been found triumphant over sin, death, and the devil.

Once you were dead and lost.  But God raised you to life in His Son Jesus.  The Father now says to you, “Your brother, My Son Jesus was dead, and is alive again.  Repent and find your life in Him.  No matter how low it has gotten for you, Jesus has gone to the lowest depths on your behalf in order to become the way back for you. You’re not an outcast stepchild here.  You are robed in Jesus’ righteousness at the font and the family ring is put on your finger.  The banquet table of the supper is laid before you, the body and blood of Christ given and shed for you for the forgiveness of sins.  You are a full-fledged child in My house through Jesus; for He came into the world to save sinners.  Full atonement has been made for you.  Welcome home.”

("The Prodigal Son" © Edward Riojas, is used with permission.  You can order prints of this artwork here.)