Safely Through the Fire

The Lord is risen!  He is risen indeed. Alleluia!

There is nothing that reveals a person’s faith and character more than when they are facing the threat of death; all facades are stripped away and the heart is revealed.  When our Lord Jesus faced the horror of bearing the judgment of the whole world’s sin on the cross, He didn’t shrink from the task; His heart confidently trusted in His heavenly Father.  And on this day we celebrate the fact that Jesus’ faithfulness was vindicated; He rose again bodily from the grave on the 3rd day in triumph, having accomplished the salvation of the whole world.  As we sang in the hymn, He endured the cross and grave, sinners to redeem and save.

The hearts of Shadrach, Meshach, and Abednego were certainly revealed when they faced the threat of death.  They got into trouble when they refused to bow down to a massive idol that the Babylonian king, Nebuchadnezzar had set up.  In celebration of his conquest of Israel and other nations, Nebuchadnezzar had this sixty cubit, 90-foot tall idol constructed, entirely plated with gold.  King Nebuchadnezzar allowed the people he had conquered to keep their own religions, but he demanded that they must also follow the religion of his kingdom, embodied by this idol, or suffer death.  Faithful Israelites could not possibly do that.  For the only true God had commanded them, “You shall have no other gods.”  So when the music began to play and the order came to bow down, these three men remained standing.  When they refused to obey, even after having been brought before the king himself, they were sentenced to death.  They were thrown into the blazing furnace. 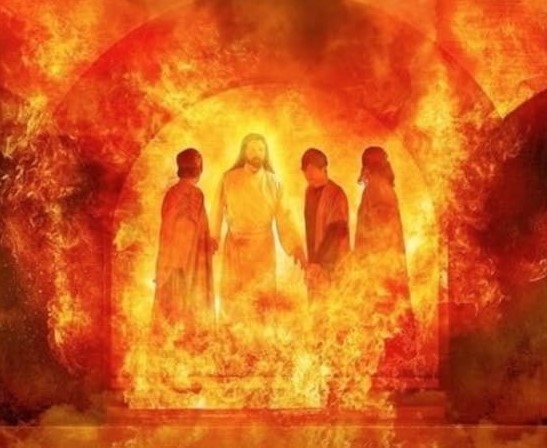 All of this foreshadows what would happen to Jesus when He refused to give homage to the idols of His day.  It was not a golden image which He was pressured to bow down to but ones such as the devil laid before Him, the idol of glory without suffering or the cross.  Jesus was pressured to bow down to the idolatrous self-justifying laws of the Pharisees and the religious institutions of His day that stood opposed to God.  They would have let Jesus go on teaching if He would’ve given reverence to their ways and fit in with their system.  But because He didn’t, because He remained faithful to His heavenly Father’s will regardless of the consequences, they plotted His death.  He was sentenced and crucified.

We, too, can get ourselves into trouble when we refuse to bow down to the idols of our day.  We’re not pressured to give homage to a gold statue either, but to other “deities” of our age–things like the “god” of self-expression and self-fulfillment, which says that the most important thing in life is for a person to do whatever makes them happy and to follow whatever they feel in their hearts, even if it contradicts God’s words and denies our need for repentance.  Say to somebody that what their heart is telling them is not as important as what Scripture is telling them, and see if that doesn’t create some anger toward you.  Or things like the golden idol of financial security, where we go along with and bow down to the ungodly spiritualities of this age in order to keep the income flowing.  How many Christian workers and managers and business owners feel compelled not to express the Christian beliefs and morality that they hold to for fear of negative consequences?  Or  things like the generic god of religious relativism, which rejects Jesus’ claim that He and His words are the only eternal truth and that He is the only way to eternal life.  You’ll be labeled as arrogant and unloving for saying that only Christianity leads to heaven and everything else is false religion. Remember, the thing that got Shadrach, Meshach, and Abednego into trouble was that they weren’t inclusive of the king’s religion.  The world is perfectly happy when people call themselves Christians, as long as Christ is 2nd or 3rd or 4th on the priority list and you keeping bowing to woke social pressures and worldly philosophies and all the many things that keep you from being here at divine service each week.  Being faithful to God and refusing to fit in with the world’s system can sometimes cause you trouble and even get you cancelled.  But Christians know that it is far better to endure the flames of suffering in this life clinging to Christ than to experience the judgment of hell which our sins have deserved apart from Him.

So here’s the good news–the resurrection of Jesus from the dead assures us that there is deliverance and new life and vindication for all who trust in Him and hold to His words.  Because Jesus literally went through hell for us on the cross, all who take refuge in Him will be rescued from death’s blazing fire and will come out gloriously alive on the other side.  That’s how it was for Shadrach, Meshach, and Abednego.  Knowing their God to be the Lord and Giver of Life, they exhibited a most confident faith in Him.  “O Nebuchadnezzar, if we are thrown into the blazing furnace, the God we serve is able to save us from it, and He will rescue us from your hand, O king.  But even if He does not, we want you to know, O king, that we will not serve your gods or worship the image of gold you have set up.”  Did you hear that?  These three men didn’t know if God would protect them from suffering in that moment.  But it didn’t matter.  Better to die to this life than to let go of the One who gives eternal life.  An enraged Nebuchadnezzar heated the furnace seven times hotter than usual.  He had them firmly tied up, and they were thrown into the furnace just as they were, wearing all their clothes.  It was so hot that the men who threw them in were themselves killed; for the unbelieving will not be saved.

But when Nebuchadnezzar looked into the furnace, he didn't see Shadrach, Meshach, and Abednego burning to death.  Instead, he stood up and said, “Look!  I see four men walking around, untied and unharmed.  And the fourth one looks like the Son of God!”  Though the King couldn’t understand it, these three men didn’t die in the flames because God was with them.  The Son of God, our Lord Jesus, was there in the furnace to save them from death.  He kept the fire from burning them.  When Shadrach, Meshach, and Abednego came out, their clothes were not even singed, and there was no smell of fire on them.  They came out of the flames unbound, alive and well.

What we rejoice in today is that when the time comes that we enter the flames of death, God will save us also who trust in Him, just as He did these men.  We may be put into the grave tied with the ropes of death’s curse, but we will come out unbound, free and well.  How do we know that is true?  Because Jesus took away the burning sting of death for us by His cross and empty tomb.  As the Scriptures say, “Where, O death, is your victory?  Where, O grave, is your sting?  The sting of death is sin, and the power of sin is the Law.  But thanks be to God!  He gives us the victory through our Lord Jesus Christ!”

Jesus willingly put Himself into the fiery furnace for us, just as He did for Shadrach, Meshach, and Abednego.  He went into the place of death and the grave in order to save His people.  At Golgotha, He was scorched by sin and Satan and death.  But that was far from the end of the story.  For His body did not decay in the tomb.  Instead, He conquered death and the devil by rising triumphantly from the grave in the flesh.  Just like the three men, He came out of the tomb unharmed as the victorious Ruler of all.  Jesus put Himself into the furnace of death in order to protect us from its blazing heat and to deliver us from it forever. On Easter morning Jesus, like a fireman, carried us out, safe and well.  His exit from the tomb is also our exit from the tomb.

Just as He was there for Shadrach, Meshach, and Abednego, Christ is surely also there for us always, even in death.  For we are baptized into Him, joined to Him by faith.  The Scriptures say, “Do you not know that all of us who were baptized into Christ Jesus were baptized into His death?  If we were united with Him in His death, we will certainly also be united with Him in His resurrection.”  Through water and the Word, Christ has doused the flames of death and has raised us with Himself to a new life.  The three men were fully clothed before they went into the fiery furnace.  So also we were fully clothed in baptism with the robe of Christ’s righteousness.  And just as the three men came out of the furnace better than when they went in, free and unbound, so also on the Last Day we will come out of the grave better than we entered it, free and unbound from the curse, with no smell of death or hell upon us.  Our waiting souls in heaven will be rejoined with our resurrected bodies, to share in the glory and perfection and immortality of Christ.  As Jesus said, “I am the Resurrection and the Life.  He who believes in Me will live, even though He dies.  And whoever lives and believes in Me will never die.”  And again Jesus said, “Because I live, you will live also.”  New life for Jesus means new life for you.  His Easter assures you of your Easter and of your eternal release from all sorrow and trouble and pain.

So it is that God says to you all through His prophet Isaiah, “Fear not, for I have redeemed you.  I have called you by name.  You are Mine . . .  When you walk through the fire, you will not be burned; the flames will not set you ablaze.  For I am the Lord, your God, the Holy One of Israel, your Savior.”

Dear fellow baptized, because Jesus came alive again bodily, you and all believers in Him will surely also come alive again bodily when He returns.  Let us therefore resolve this day to be faithful to our gracious God, just as Shadrach, Meshach, and Abednego were, trusting in Him to the very end.  For Christ gives you this promise, “Be faithful, even to the point of death, and I will give you the crown of life.”