All of us know how to play the comparison game.  You see or hear about another person, perhaps something they’ve done or achieved, things that are going on in their life.  And then you line yourself up next to them to see who’s doing better.  In your heart you usually come up with one of two conclusions: either you’re proud and satisfied with yourself, or you despair and are depressed about yourself.  The comparison game is not a good game to play, but our sinful nature can’t seem to avoid it.  For the old Adam is always obsessed with the self, and he wrongly judges himself in terms of others rather than in terms of God and His Word.

Pride can rear its ugly head in the comparison game even in something as simple as watching or scrolling through the news.  We see rioters and looters and vandals, we see the corrupt politician or the hypocritical celebrity or the sexually deviant person, and we think, “Thank God I’m not like those people.  I’m certainly doing better than they are.” 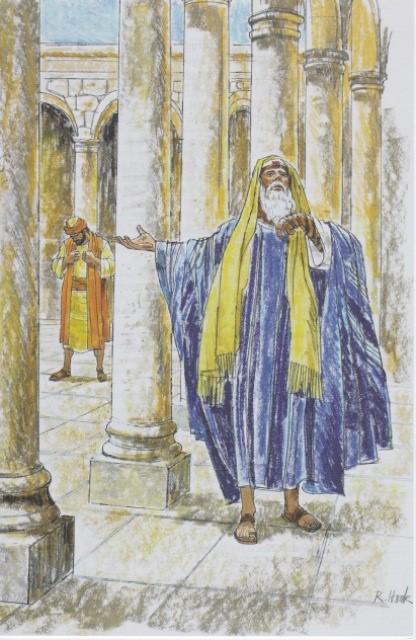 But notice how that’s the way the Pharisee talks.  He mentions God; He even seems to thank God for His good works, but not really.  For notice how it says that the Pharisee prayed with himself.  That’s the only safe way to pray if you’re playing the comparison game–with yourself and by yourself.  The name of God is used by the Pharisee just once; the word I is used four times.  God is not really the focus here; He’s just window dressing for the main attraction, the pious Pharisee.

Now, the Pharisee here seems to be a little bit of a caricature that we can easily make fun of.  But be careful, for as soon as you start thinking, “Thank God I’m not a self-righteous snob like the Pharisee,” then you’ve become the Pharisee yourself.  Then you’re the one looking down on others.  You don’t like it when people act all holier than thou, but the fact that you’ve got to go and point that out shows that you really think you’re better than them.  And so you’re caught.

Repent.  Pride goes before destruction, a haughty spirit before a fall.  He who exalts Himself will be humbled.  Turn away from religion which is all about you and your spiritual self-improvement.  The Gospel is not “God helps those who help themselves.”  That statement is not in the Bible.  Do not trust in yourself to become good before God; it cannot be done.

But at the same time, do not give way to despair, either.  For that is the other side of the same coin in the comparison game.  People who know they haven’t measured up, who have botched things, compare themselves to others and say, “Look at how I’ve messed things up and sinned.  My life is full of mistakes and failings and regrets.  Nothing seems to be the way it should be.  I don’t see any great future for me, especially with God.  It’s hopeless.”

Those who succumb to spiritual despair are really engaging in the very same sin as the Pharisee, oddly enough.  Both pride and despair are obsessed with the self.  The proud person looks at himself and thinks he sees good.  The despairing person looks at himself and sees bad.  But both are engaging in the exact same spiritual activity–narcissism, mirror watching.  It’s all about me.  Jesus told this parable to some who trusted in themselves.  Both the proud and the despairing person think that it’s all about them and their efforts and what they do.  For one this is happy, for the other it’s sad.  But they both believe the same thing, and they’re both wrong.  That’s why they both end up despising others, as Jesus said.  The proud person looks down on those he thinks to be inferior to him.  And the despairing person despises those who are above him, those who have supposedly held him down and kept him from being able to become the person he was supposed to be.

Let go of all that comparing and instead embrace grace.  “By grace you have been saved.”  God’s grace and mercy alone.  There is no comparison to that.  Nothing can compare to what is freely given to you in Jesus Christ.  The tax collector’s worship is the right kind of worship, that of humble reverence before the Lord.  It’s right because his faith is not in himself in any way but in the Lord’s sacrificial compassion.  It all depends on that.  He doesn’t presume that he has the right to draw near to God on his own merits.  He stands afar off with his face not even lifted up to the King of kings.  He beats his chest in sorrow as if to say, “What have I done?”  And his only plea is, “God, be merciful to me, a sinner!”

That may not be the kind of worship that draws crowds and makes you feel all tingly, but it is the kind of worship that Jesus seeks and that He praises here.  For Jesus says that it’s the tax collector who goes down to his house justified, right with God.  The tax collector comes before God with no illusions that he has some great virtue that he can offer to God.  No, it all hangs on the belief that the Lord is a God of mercy who will not forsake even him, who will forgive him and raise him up, even though he doesn’t deserve it.

That’s why he came to the temple to pray.  This is where the sacrifices were made that God had appointed and where blood was shed to atone for sin.  When the tax collector prays “God be merciful to me . . .” the word he uses for mercy has to do with those sacrifices, all of which pointed forward to the coming sacrifice on Good Friday.  So as the tax collector offers this prayer, God is already answering it for him there in the animals being offered on the altar.  The tax collector trusted in God’s promise of sacrificial mercy, and he longed for the day when the Messiah would come and bring all of these things to their fulfillment.

Let us also then learn the lesson of the tax collector and take our place with him.  Let us come before the Lord with humble reverence, with sincere repentance and true faith.  For it is written, “The Lord is near to those who have a broken heart and saves such as have a contrite spirit.”  If you know the burden of your fallen nature, if you’ve made some poor choices in life, if this world at times just wearies you to death, then the Lord Jesus is for you.  Pray the same prayer, “God, be merciful to me, a sinner!”  And He is, and He will be, and His mercy endures forever.  For He has made the sacrifice for you in the temple of Christ’s body on the altar of the cross.  Through the sacrifice of the Lamb of God, your sin has been fully atoned for.  You are released and forgiven.  You are released from all the religious score-keeping and comparison games that divide you from your neighbor.  You are free now simply to “rejoice with those who rejoice and weep with those who weep.”  Through Jesus you are reconciled to God, and in Him you are reconciled to each other.  It is written, “You who once were far off (as the tax collector stood far off) have been brought near by the blood of Christ.”

Now you are given to lift up your eyes and see heaven opened through Jesus.  For He fulfilled His own words here, humbling Himself even to the point of death on a cross.  He didn’t say to His Father, “God, I thank You that I am not like other men”–even though He’s the One who actually could have said that.  Instead, He made Himself to be like us and shared in our death so that we would share in His life and His bodily resurrection.  God the Father has now exalted the risen Jesus to the highest place and given Him the name that is above every name, that at the name of Jesus every knee should bow.  And that is what you do, even at this altar rail, as the Lord comes to you with His mercy.

Here, then, is the good news–all of you are given to go down to your houses today justified and righteous.  “It is by grace you have been saved through faith” in Christ, who is your righteousness.  This Gospel casts out both pride and despair.  For the Epistle said, this is “not of yourselves,” from within you, “it is the gift of God” from outside of you, “not of works, lest anyone should boast.”  If there’s going to be any boasting, let it be boasting in the Lord.  For even your good works are ones that He has prepared beforehand for you to walk in.  It’s all from Him.

You have been turned from children of wrath to baptized children of grace.  You are justified, right with God in Christ.  Therefore, humble yourselves before the Lord, that He may lift you up in due time.