When you listen to the music of the season on the radio, it’s often hard to tell whose coming we’re getting ready for.  Is it “Santa Claus is coming to town,” or is it “Savior of the Nations, Come”?  Whose arrival are we focused on and most eager for, St. Nick or Jesus?  Of course, I would certainly hope that for you it’s the latter of those two–especially during this Advent tide where we are preparing not only for Jesus’ coming at Christmas but also for His return on the Last Day.  A merely secular observance of the “magic” of Christmas, where everything is about fairy tales and nothing is about the Christ of the Christ mass–that’s ultimately a hollow holiday. 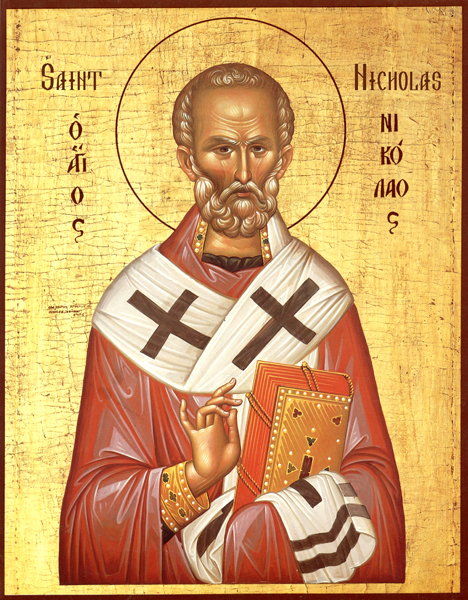 Nicholas was an actual person who lived in the late 200's and early 300's A.D.  St. Nicholas was born into a wealthy family in Asia Minor, what is now Turkey.  Having become a Christian, He chose not to pursue a life of riches but instead he devoted himself to the church.  He eventually became bishop of a city called Myra.  Myra was a decadent and corrupt city, and Nicholas became well known for transforming it by his pious hard work and preaching the Word of Christ.

St. Nicholas was also known for his love for those in need, such as poor widows and orphaned children.  As bishop he saw to it that the church worked to care for the needy.  Perhaps his giving of gifts, especially to impoverished children, is part of what formed the Santa Claus tradition.

And there is one story in particular about Nicholas that stands out above the rest and is the  most famous.  There was a very poor man in the city of Myra who had three daughters.  This man did not have any money to provide his daughters with suitable dowries necessary for them to get married.  Without being able to marry, they seemed destined to be sold into slavery or prostitution.  Nicholas was deeply troubled about this and decided to help.  But he did so in a way that wouldn’t draw attention to himself.  Nicholas prepared three small bags of gold.  He went to this man’s house and threw a bag of gold into one of the open windows–enough for the first daughter to be married.  Then, the day after her wedding, he threw a second bag of gold into the window, enough for the second daughter.  And after her marriage, likewise a third bag of gold for the last daughter.  Later on when this story was told in colder regions, Nicholas was portrayed dropping the bags of gold down the chimney.  Still to this day three golden bags or golden spheres are the sign of a pawnbroker, in remembrance of how Nicholas bought these three daughters out of hock, you might say, redeeming and rescuing them from the fate that awaited them.

There are many more accounts of Nicholas helping others, too.  For instance, once there were three men who were falsely accused of a crime and sentenced to death.  But Nicholas stepped in and spoke in their defense and was able to secure their release and give them their lives back.

It’s interesting that in all the stories of St. Nicholas that I’ve seen, the number three keeps popping up–three daughters without dowries, three falsely accused men, three sailors whom he rescued from drowning.  And this is fitting.  For Nicholas was one who was a defender of the Trinitarian faith, someone who proclaimed belief in the only true God who is threefold, Father, Son, and Holy Spirit.

In fact, it is quite likely that St. Nicholas was one of the bishops present at the Council of Nicea which defended and confirmed the teaching that Jesus is both true God and true man.  It is from this council in 325 A.D. that we get the Nicene Creed which we confess here each week.  A certain false preacher named Arius was teaching that Jesus was not of the same substance as the Father, that the Son of God was a created being, god-like but not true God.  The Council of Nicea roundly rejected that heresy and reaffirmed the Scriptural position that Jesus is both fully divine and fully human in one undivided person, true God from all eternity.  In fact, there is a story that at the Nicene Council Nicholas became so upset with Arius’s heresy that he slapped him in the face.  The main way to get on the naughty list with St. Nicholas, it seems, is to believe or proclaim false teaching.

This is how we should remember St. Nicholas, as a defender of the Christian faith, faith in Christ the Son of God as the only Savior from sin and death and the devil.  Nicholas preached Jesus, baptized people into Jesus’ body, absolved people of their sins in Jesus’ name, fed them with the life-giving body and blood of Jesus.  That’s the real St. Nicholas.  He wasn’t a Santa Claus taking attention away from Jesus.  He was a preacher drawing everyone’s attention to Jesus, reminding everyone that Christ is coming again.  He wasn’t one making a list and checking it twice to see who was naughty and who was nice.  For he knew that his people were both sinners and saints at the same time and that all desperately needed Christ’s forgiveness and mercy.

By God’s grace the love of Christ was shown forth both in St. Nicholas’ preaching and also in his life.  We give attention to the generous deeds of Nicholas because that ultimately draws our attention to the infinitely generous love that he himself first received from God.  It was that love of God that was working through Nicholas in his life.

After all, just consider his deeds.  Nicholas sacrificed and gave of his own resources to save the three daughters.  Is that not what Jesus did for us?  He sacrificed and gave Himself for us to rescue us from being eternally violated by death and the devil.  He redeemed us not with bags of gold or silver, but with His holy precious blood and with His innocent suffering and death.  So it is that the church is now worthy and prepared to be His holy bride.

Likewise, Nicholas stood in to defend those facing death, risking his own name and reputation.  Is that not what Jesus did and still does for us?  He stood between us and eternal death on the cross and thereby kept us from having to suffer that most capital of all punishments.  Furthermore, the Scriptures say that even now Jesus is standing before the Father as our advocate, speaking in our defense, responding to every charge laid against us with the merits of His own blood and righteousness.  Through Him we are set free to be people of God.

The same love of Christ that was at work in St. Nicholas is at work also in you.  For in your baptism you were crucified with Christ; and you no longer live, but Christ lives in you and through you.  The Lord is working so that His boundless love which has been shown to you might spill over to others, in the giving of yourself, in the giving of gifts–not so that you can feel good about yourself, but so that your giving might be anonymous and entirely for the good of others, like a bag of gold through an open window at night.  That’s why I think it is a fine tradition for someone who gives an anonymous gift to say that it’s from Santa Claus, St. Nicholas.  For such a gift is given in a spirit that reflects the love of Christ as Nicholas did, and ultimately it seeks to give glory not to ourselves but to God who is the true Giver of every good and perfect gift.

So if St. Nicholas were here today, he would draw your attention to the Christ child in the manger–given to us almost anonymously, noticed only by shepherds on that night.  But hidden within the wrapping of His lowly humanity dwelt all the fullness of the Godhead bodily full of grace and mercy.  Jesus is Love in the flesh for you.  There is no greater present than that.  That is the ultimate gift St. Nicholas sought to give.

And if Nicholas were here today, he would also draw your attention to the fact that this same Jesus is going to return to judge the living and the dead; He is coming back.  When you see signs of the end, when everything in this world seems to be in a state of upheaval, when creation itself appears to be coming apart at the seams, then look up and lift up your heads.  For this fallen world will finally pass away on the Last Day, the curse of sorrow and death will be lifted, and the new creation which we have set our hearts on will finally come to be.  St. Nicholas would urge you not to be ensnared by the things of this world, but to watch and pray.  “When you see these things happening, look up and lift up your heads, for your redemption draws near.”  Your Redeemer is coming; He is at the very gates.

And in fact St. Nicholas actually is here today and every time we gather for divine service.  For in Christ’s presence dwell angels and archangels and all the company of heaven, all the saints and believers who have gone before us.  They gather with us around the altar at the Holy Sacrament. That’s the symbolism of the curved altar rail.  The circle is completed unseen on the other side of the altar.  Thank God that St. Nicholas is no fairy tale, that He is alive in Christ.  He lives forever because, just like you, he was baptized and believed in Jesus, who was born, and died, and rose for us all, and who is coming again to bring our redemption to its fulfillment.  Heaven and earth will pass away, but Jesus’ words will by no means pass away.