I Did Not Come to Destroy But to Fulfill

Jesus said, “Do not think that I came to destroy the Law or the Prophets. I did not come to destroy but to fulfill.”  Jesus was not a political radical or a revolutionary as He’s sometimes portrayed.   He wasn’t a “community organizer” trying to demolish the “system” and replace it with something altogether different.  He didn’t come to overthrow the institutions of the Old Testament but rather to bring them to their goal and culmination.  After all, He’s the one who established the Old Testament.  He came to bring it all to its perfect expression and realization in Himself, to fulfill it and thereby to bring about the New Testament.

That’s why Jesus goes on to say, “Whoever breaks one of the least of these commandments, and teaches men so, shall be called least in the kingdom of heaven.”  Anyone who says that the ten commandments no longer apply to today’s contemporary world, that traditional definitions of marriage and morality and gender and family can be discarded, that times have changed and church teaching has to change with them–those who say such things, even under the guise of love and tolerance, are acting against Christ.  He didn’t come to destroy the Law but to fulfill it. 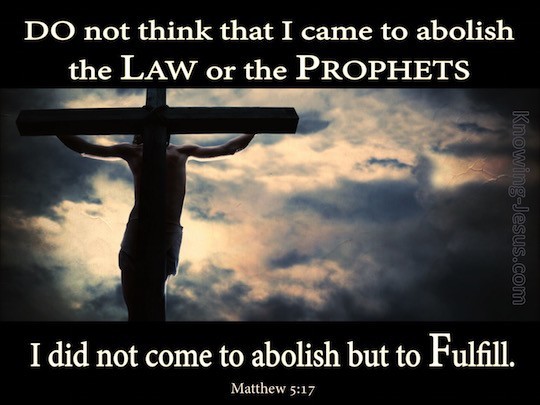 And this applies not only to others out there, but also to us in here.  We know well the temptation to brush aside God’s Law, to think to ourselves, “Even though this is probably wrong, even though it breaks a commandment, I can go ahead and do it anyway because God will forgive me.”  We in effect destroy God’s Law when we misuse His grace in that way, as an excuse to live however we please.

St. Paul addresses this in the Epistle.  “Shall we continue in sin that grace may abound?  Certainly not!  How shall we who died to sin live any longer in it?”  God’s forgiveness is not a  license to sin, it’s freedom from sin.  It’s the taking away of sin.  Why would we want to embrace again the very things which once condemned us to hell?  Since the old Adam still hangs around our neck, tempting us to think lightly of sin, the Law is still in force in this fallen world.  Not one jot or tittle will pass away from it till all is fulfilled at Christ’s return.

However, just because that is so, we shouldn’t fall into the opposite error and think that we can gain eternal life by our keeping of the Law.  For listen to what Jesus also says, “Unless your righteousness exceeds that of the scribes and Pharisees, you will by no means enter the kingdom of heaven.”  It’s not just that you have to do your best and try your hardest, and God will accept that.  It’s that you’ve got to do even better than those who dedicated their whole lives to keeping God’s Law down to the finest detail, otherwise you can forget about eternal life.

Truly keeping the Law is not just about good outward behavior like the Pharisees; it’s also about thoughts and desires–an inward righteousness.  This is how Jesus teaches the 5th Commandment.  It’s not simply that you shouldn’t murder, but if you speak angry words or harbor ill thoughts or desire payback, you’re a murderer in your heart.  And it’s not only what you shouldn’t do but what you should do, too–helping those in bodily need, seeking reconciliation with those who have wronged you, or those whom you have wronged, as far as that is possible, as far as it depends on you.  So have you done all that?  Keeping all the commandments both outwardly and in your thoughts and words?  Can you really do any better than the scribes and the Pharisees?  If not, then the judgment of the Law is that you will not enter the kingdom of heaven.

Repent, then.  Let the Law drive you away from yourself and your own efforts to Christ, who is your only Help and the only One who can save you.  For only in Jesus do you receive an inward righteousness before God, the righteousness of faith, where you rely on Christ alone.  We prayed it in the Introit, “The Lord is my strength and my shield; my heart trusted in Him, and I am helped.”  Only in Jesus is there deliverance from the judgment of the Law.  For only Jesus has kept the Law without fault or failing.  And He did this for you and in your place.  Through faith in Him, His righteousness is counted as yours.

It is written in Hebrews, “He was tempted in all points as we are, yet without sin.”  Jesus kept the commandments perfectly.  Not only did He not murder or steal or have impure thoughts, but He also perfectly loved His Father in heaven and His neighbor on earth, showing compassion, healing, doing good and teaching the truth to all.  Our Lord lived a holy life as our representative and our substitute, so that our unholy lives would be redeemed.

And Jesus also fulfilled the Law by completing all of the Old Testament ceremonial requirements regarding the Sabbath and the sacrifices and so forth.  Through His holy death and His rest in the tomb, Jesus became our Sabbath Himself, as He says, “Come to Me all you who are weary and burdened, and I will give you rest.”  “I release you from the crushing weight of the Law.  I give you peace and reconciliation with God.”  And by His once-for-all offering as the Lamb of God on the cross, all the sacrifices came to their end and their goal.  So whether it’s the food rules or anything else, it’s all fulfilled in Jesus.  Through Him you now have perfect cleansing from your sin.  Through Him the Law no longer condemns you.  You’ve been put right with God again.  It is accomplished, completed, perfected.  All has been done, as Romans 10 declares, “Christ is the end of the Law for righteousness to everyone who believes.”  Our Lord is risen from the dead to give you a new life and a sure hope.

That’s how the words of Jesus which seemed to be bad news are now the greatest good news:  “Unless your righteousness exceeds the righteousness of the scribes and Pharisees, you will by no means enter the kingdom of heaven.”  But by faith in Christ, your righteousness actually does exceed that of the Pharisees, for it has been given to you freely by God’s grace.  You have the perfect righteousness of Jesus as your own.  The Father has declared you to be righteous in His sight.  Through Christ you will enter the kingdom of heaven.  In fact you have already entered it by faith.  For you are baptized into Christ, and He is the King of heaven.

Our Lord has brought you through the Red Sea of baptism, out of the house of bondage.  Your old selves were crucified with Christ, that you should no longer be slaves to sin.  Therefore, reckon yourselves to be dead indeed to sin, but alive to God in Christ Jesus.  For just as you have been united with Him in His death, you will surely also be united with Him in the resurrection of the body when He comes again.  To Him with the Father and the Holy Spirit be all worship, honor, glory, and praise, now and forever.  Amen.