Health to All Their Flesh

Racial tension isn’t just a contemporary issue.  Unfortunately it’s been around since the early chapters of Genesis, especially since the days following the tower of Babel, when people stopped seeing themselves as all of the same human race, when they set themselves against each other according to language and skin color and family lineage.  Ethnic tension was certainly an issue in Jesus’ day between the Jews and the Samaritans.  The conflict was cultural and religious, too.  For the Samaritans had intermarried with pagans after Assyria conquered them in 722 B.C.  In several important ways the Samaritans had corrupted the faith of the Old Testament.

Maybe you noticed this tension in last week’s Gospel.  After telling the parable of the Good Samaritan, Jesus asked the lawyer which of the three men had proved to be a neighbor to the man dying in the ditch. Instead of the natural response, “The Samaritan,” the lawyer just says, “The one who showed mercy.”  He couldn’t even bring himself to say the word!  Jews used the word “Samaritan” as a curse.

The church in her wisdom has given us today’s Gospel reading right after the Parable of the Good Samaritan, because strangely enough the Samaritan is again the good guy, the one to imitate. This time it’s not a parable but a real event. Jesus is traveling, and comes within earshot of ten lepers. If you think 6 feet of physical distancing is bad, these lepers had to engage in the ultimate social distancing.  Their contagious disease caused them to be quarantined from the rest of society.  They were required to shout “Unclean! Unclean!” to keep people back.  Because they were constantly shouting, they were frequently hoarse, and so would bang on pots and shake rattles to warn people away.  And I imagine that, just like the people who saw the man who’d been mugged and left for dead in the Parable of the Good Samaritan, anybody who heard the deathly rattle of the lepers moved far away as quickly as possible.

But when Jesus comes on the scene, instead of shouting, “Unclean!” they muster the last strength of their voices to shout, “Jesus, Master, have mercy on us!”  Now how would you have reacted?  When someone says, “Can I ask you a favor?” do you cringe a bit, and begin preparing possible excuses?  Well, now imagine the person is contagious with a deadly disease.  Perhaps you’d help your friend.  Probably you’d help your family, although if it’s a bit messy, you may well prefer to hire someone else to do what needs to be done.  But it’s not always our first instinct to stay and answer the cry for mercy. 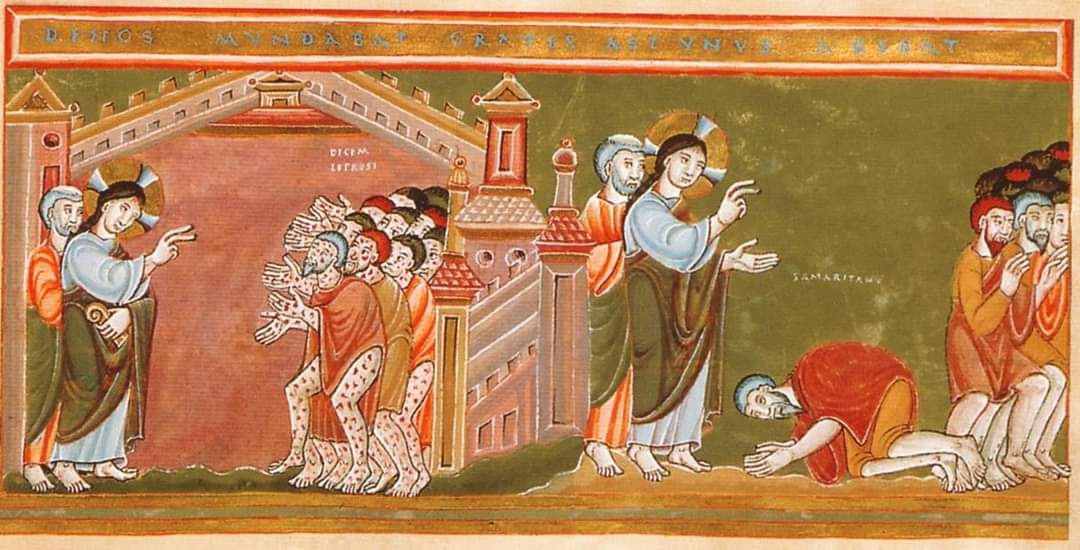 So the center of this account today is not the thankfulness of the Samaritan leper.  It’s Jesus. It’s the Man who doesn’t say, “You know, somebody should really do something about that?” but who instead says, “I will do something.”  The good news of Christ is this: God the Father looked down into the disaster of our world, the sickness and rebellion of our human race, and said to His Son, “It’s time to have compassion.” And the Son said to His Father, “Yes.”  He sent no angel to help.  He did not fly in emergency supplies and parachute them down in crates.  The Son came into the hellhole Himself.  Like the Good Samaritan, He went into the ditch, with bandits lurking around the corner, and gave up His own room, His own animal, His own money, to rescue the dead man.  When He saw lepers, He did not run away or ignore them, but made Himself unclean to bring about their cleansing.

Perhaps you have an ugly secret you’ve kept hidden for years.  Some of you may be struggling right now with an ongoing sin, an addiction, a resentment, a lust, a hatred, that you cannot seem to quit. Your weakness and your shame you keep hidden in the darkness and behind closed doors, but the voice in your head still shouts at you, “Unclean! Unclean!”

And you are convinced that if your parents or spouse or children, if your friends, if your pastor knew the truth, they would reject you, run from you like they would from a leper.  But as it is for the lepers, so for you: God the Son became man, took on the form of a slave, came to breathe the deathly air of your contagion, came to know your darkness, and He does not turn away from your uncleanness. With the Lord there is healing and forgiveness: forgiveness for everything the Epistle listed as your old works of the flesh: sexual immorality, idolatry, sorcery, hatred, contentions, jealousies, outbursts of wrath, selfish ambitions, dissensions, heresies, envy, murders, drunkenness–all of it.  With the Lord there is release from those slaveries, forgiveness for everything you are and have done and have been.

For notice where it is that Jesus is heading at the beginning of the Gospel.  He is on His way to Jerusalem.  It will be His final visit to this city.  He is going there to die for you, on your behalf.  He goes bearing the uncleanness of the world on the cross, cleansing you from it by His purifying blood.  He bears the curse of sin that you feel not only in your hearts but also in your bodies, too.  He goes to release you from disease and uncleanness in your flesh.  It is written, “Surely He has borne our sicknesses and carried our sorrows, and by His wounds we are healed.”

We cry out, “Jesus, Lord have mercy,” and He does.  He says, “Go, show yourself to the priest.  Come into My presence with boldness and confidence.  I am your Great High Priest who has offered the final sacrifice for you to cleanse you.  You may not be able to see it yet, but I declare it to you now: you are clean, you are forgiven, you are healed and whole and freed from all that troubles you.  Believe it; it is true.  Walk by faith; for down the road you will see it all with your own eyes, as the lepers did, when I come again in glory.  Have faith in my words of mercy and life.”

The second part of today’s Gospel deals with our reaction to God’s mercy in Christ, what it works in us.  Only one of the ten returns. “And he was a Samaritan,” Luke tells us.  For the original hearers, that might have been the most dramatic sentence of the whole story.  It’s like being an author in Nazi Germany and making the good guy a Jew.

Jesus keeps on overturning everyone’s expectations; in the Gospel tax collectors, sinners, and Samaritans are the heroes, while the most pious and upright become the villains. It’s no surprise why Jesus was a threat and they wanted to kill Him.  Jesus came to overthrow our natural expectation that salvation is found in what we do and where we come from. Salvation is to be found in Him alone.

The closing words of today’s Gospel, “Your faith has made you well,” are more accurately translated, “Your faith has saved you.”  In other words, the Samaritan is saved not merely from leprosy but from death and hell.  He is rescued from the grave, and he is given a place among God’s people at the heavenly banquet.  For Christ Jesus came not only for Jews but also for Samaritans; He came for rich and poor, immigrants and natives, men and women, black and white, for every tribe and people and language.  There is one human race, for we are all connected on the family tree of Adam.  And God the Father has grafted us into His family tree through our baptism into His Son Jesus.  The Father has adopted us as His own children, giving us the church as our mother.  This means that all Christians around the world are brothers and sisters in a way that transcends even the blood lines of our birth family.

This is what truly brings us together.  Think about how even within this band of 10 lepers, the differences between Jew and Samaritan faded away because of their common condition and their desperate need.  When we all learn to see ourselves as desperately in need of God’s mercy in Christ, no matter who we are, then our other differences will be put into their proper context, and we will rejoice to share in a common salvation with those of any race or ethnicity who cling to Jesus as their Great High Priest and Redeemer.

So hear His words to you today: Your faith has saved you.  Which is to say, the One you have believed in has saved you, redeemed you, made you His own.  You now belong to Christ, by faith in God’s grace, by His working.  So when St. Paul says in today’s Epistle, “Walk by the Spirit,” he is not issuing you a set of laws and regulations by which you obtain salvation. This is who you now are: a person who has received the Holy Spirit; and so you have been given love, joy, peace, patience, kindness, goodness, faithfulness, gentleness, self-control.  You are a person who has crucified the flesh with its passions and desires. This is not yet complete, for the old Adam still struggles within us, fighting to drag us back.  But that’s not the true you.  Daily drown your old nature.  Confess your sins.  Bow before Jesus here in the flesh.  Receive His body and blood.  That is your true Eucharist, your true thanksgiving.  Rejoice to be nourished with this holy food which cleanses you from every stain of sin and which makes you who you truly are.  By the declaration of God you are no longer unclean but clean, children of God in Jesus.  “O Give thanks unto the Lord, for He is good; and His mercy endures forever.”