Ordinarily when I preach on today’s Gospel reading, I like to focus on the miracle and the things that lead up to it.  Today, though, I’d like to focus more on the results of the miracle and what follows after it.  The Gospel reading tells us that after the deaf-mute’s ears were opened and his tongue was loosed, the man spoke plainly. More precisely Mark tells us that the man spoke rightly.  The Greek word is orthos.  It means to act in conformity with a norm or standard–rightly, correctly.  Our words Orthopedic (right feet), Orthodontics (right teeth), and orthodoxy (right teaching or right praise) all come from this word.  And so the deaf and mute man spoke orthos; he spoke rightly.

Applying this to ourselves, we are reminded that there is a right way and a wrong way to talk, and not only when it comes to your ability to form words but especially when it comes to what you say.  Even if we have perfect pronunciation, we can still fail to speak orthos, rightly–if we don’t honor our Lord’s name with our lips, if we speak with words of self-serving pride, if we gossip about our neighbor and put the worst construction on his actions.  And so we also need the Lord to heal our tongues so that we speak orthos, rightly and correctly. 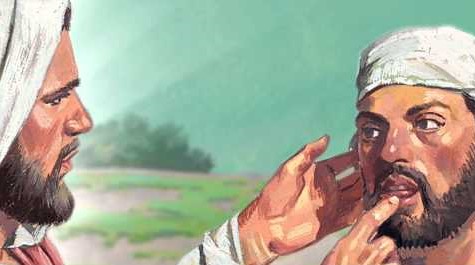 When the deaf mute had his speech restored to what is straight and right, the people knew  that the healing was good.  It was miraculous.  They wanted to tell others about it.  What they didn’t understand was why Jesus told them to be quiet about it. And since they could not understand that, they ignored Him.  Because they couldn’t understand the reason, they chose to do what they wanted and what they thought best.  What harm could come from telling others about the compassionate power of God in Jesus?  Such a thing seemed not only victimless but good and even necessary despite the Lord’s command.  But don’t ever let not understanding God’s words and commands be the reason for you to do something against them. The person who does not know why the pin is in the grenade should not be the one to pull it.

And here was the problem. They weren’t telling people that Jesus is the Lamb of God who takes away the sin of the world, the one who has come to redeem and restore creation.  They were telling people that He was a miracle worker.  Now that wasn’t incorrect; it wasn’t heresy.  But it was misleading since it wasn’t the whole story  (sort of like most of our evening news).  This confusion about who Jesus is, what His mission and purpose are, ended up making His ministry more difficult.  You may recall that when Jesus was brought in front of Herod at His trial, Herod wanted to see what he had heard about.  The news was that Jesus performs miracles.  And so Herod wanted to see a trick; he didn’t care what Jesus had to say or teach or who He was.

The real miracle Jesus came to perform, though, is the atonement of the world.  He came to reconcile all of humanity back to His Father through His death and resurrection.  He came to give His life as a sacrifice and ransom and to rescue us out of Hell.  He came to make all creation orthos again.  But Herod doesn’t get that.  And that might well be partially the fault of these people who couldn’t stop themselves from blabbing about this miracle when Jesus told them not to.  And so you could say that the people who brought the deaf mute to be healed also did not speak orthos, rightly.

These things are a warning to us. God’s Word is never arbitrary. When He says don’t tell people, He means it, even if it seems counterintuitive.  The history of sin is the history of thinking we know better than God’s Word what is good.  Eve didn’t understand the reason for God’s command not to eat the fruit.  She couldn’t see why God would command this since it was good for food, pleasing to the eye, and capable of making her wise.  Why then not do what she thought to be good, since God’s Word and command didn’t make any sense.  She didn’t think she would bring pain, sorrow, and death upon herself and her children. She thought God was wrong about what was good, or that God didn’t really understand. So she took matters in her own hands. And her husband who was with her let her do it.

That is what you do every time you sin.  We refuse God’s Word for our own wisdom. “Sure,” we say, “gluttony is a sin, but what’s wrong with overindulging in a little food or drink?  Doesn’t God want me to enjoy myself?”  “What’s wrong with skipping church for a few weeks when the kids have sports or when we’re on vacation?  Sure, God commands us to remember the Sabbath Day each week, but these other things are good, too.”  “What’s wrong with living together and having sex before marriage if we intend to get married eventually?  Sure, there’s that 6th Commandment, but doesn’t God support our love?”  “What’s wrong with conceiving a child outside of the womb with in vitro fertilization?  Sure that’s not how God created it to happen, and IVF almost always kills multiple embryonic children, but doesn’t God want us to try to be fruitful and multiply?”  And I could go on and on with examples of how we justify and rationalize our departure from God’s words.

God’s Law is always good.  His Word is always trustworthy.  Sometimes, to our fallen reason, it seems contrary to what is good.  But that is only because we are ignorant.  Don’t pull the pin on the grenade.  Don’t be like the friends of the healed man who ignored Jesus’ words and did what they wanted to.  When God’s Law seems contrary to what is good, we do best simply to repent and submit to God’s Word.  When we don’t, when we insist upon our way, we hurt ourselves and we hurt others. We pull the pin. There are no victimless sins.

But here is comfort for sinners. Despite the glaring imperfections of these people, the Lord had compassion.  He listened to the prayers of the people.  He healed the man.  He didn’t put them off as if helping them was beneath Him.  He came with real compassion.  For He came to restore our bodies as well as our souls.  He cares about people when they are suffering physically.  He sees you and cares about you.  His sigh to heaven comes from His heart. The sorrow and pain of the deaf man moves Him to act even though it will result in making His ministry and mission harder. The fact that they don’t listen to His Word, that they take the miracle and run, that they don’t fully understand who He is, does not stop Him or lessen His compassion.

Jesus is the friend of sinners. He has compassion on all who suffer.  He groans in sorrow and grief over our predicament; He literally feels our pain.  He groans, too, over what has been done to us by the devil, by our neighbors, by our loved ones, and of course also by our own foolish decisions and actions.  Getting involved with us means that He will have to suffer, that we will complicate things–but it doesn’t matter to Him.  He gets involved anyway.  He sticks His fingers in our ears.  He is dirtied by the gunk of our fallen nature.  He takes our sorrow, our sin, our blame into Himself in order to heal and save us.  He groans all the way unto death on the cross and overcomes the curse for you, that you might be made new, that your entire selves might be orthos and right again forever.

This flesh and blood Jesus bears with you; He does not turn away from you but gets up close and personal with you.  He puts the finger of His Holy Spirit into your ears in the preaching of the Gospel, so that you can hear rightly and believe and be saved.  He spits and touches you in baptism, where by water and the Word of His mouth He regenerates you and gives you new birth.  He places His true and real body and blood on your tongue for the forgiveness of your sins.  He opens your lips, and your mouth declares His praise.  He is faithful to you even unto death and has risen from the dead in order to bring you to Himself alive and healed on the last day.  Truly then, He has done all things well–for you.

(with thanks to Jason Braaten and David Petersen)