Do Not Worry About Tomorrow

We live in an anxious world, don’t we.  Most of us, I think, have the sense that things are not as stable and sure as they used to be.  A lot of it has to do with COVID and how that has upended virtually every single aspect of our lives. Then there’s the news media which seem to have as one of their purposes to make you fearful and anxious about something, especially your health and safety. We’re anxious about the economy and finances and prices going up and job stuff.  With not enough people working for various reasons, those of you who are working are often stressed from being overworked.  As we pass the 20th anniversary of 9/11, we’re anxious about international threats and political division and governing officials who don’t exactly instill confidence, while our nation’s position in the world declines.  We’re anxious about loved ones who struggle with various needs, about what the future holds for our children and grandchildren.  We’re anxious about the church and how she will survive in an increasingly hostile culture.

Into all of this, Jesus comes today with the words, “Do not worry about tomorrow, for tomorrow will worry about itself.” That sounds a little bit odd to our ears.  Some would say it’s irresponsible.  At the very least, most people would say it’s a little quaint or naive in today’s world.  But Jesus’ words stand.  He doesn’t back down.  He says, “Look at the birds of the air, for they neither sow nor reap nor gather into barns; yet your heavenly Father feeds them. Are you not of more value than they?  Which of you by worrying can add a single hour to the span of his life?” 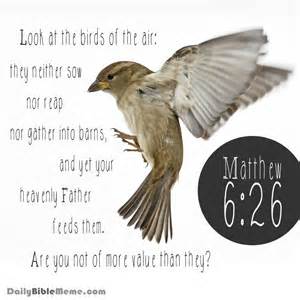 Now some of you might be thinking about this analogy that Jesus draws.  If you’re a bird watcher, you know they work very hard to make a living. They spend a good portion of their waking hours looking for food.  Jesus knew that too. So the point is not that you should be apathetic and lazy and just sit back and not work.  The point is that sparrows do not worry about the future like we do.  They feel no urge to try to foresee the future.  They work hard and sing, and then they nest down for the night, but they do not worry.  They are provided for by their Creator.  And if your heavenly Father takes care of them, how much more will He take care of you who are of much greater value, you who are created in the image of God?

Jesus is saying here that worry is a symptom of a spiritual problem.  Worry is the opposite of faith and prayer.  Worry is what we do when we doubt that God is really in control or when we aren’t sure that He actually cares and is paying attention.  And so we try to take over His job with our worrying and anxiety.  We think it all depends on us and our plans and our managing of the situation, that it’s all in our hands.  When we’re worrying, we aren’t trusting in Him, are we.  When we’re worrying, usually we’re trying to control what is ultimately uncontrollable.

Unbelief worries, but faith prays.  Faith doesn’t deny that there are real problems to deal with; it doesn’t pretend everything will be all rosy if we just try to stay positive.  But faith knows that in the end, everything is in God’s hands, not ours.  And so it looks to Him for help and deliverance  and mercy, confident that He will work all things together for our good just as He has promised us.  By faith we trust in the Scriptures which say, “If God is for us, who can be against us?  He who did not spare His own Son but delivered Him up for us all [on the cross], how will He not also with Him freely give us all things that we need?”  Jesus Himself says, “Come to Me all you who are weary and burdened [and anxious], and I will give you rest.”

So don’t doubt but trust that your lives are in the Lord’s hands and that He will care for you according to His gracious will, even when it seems like you’re getting to the breaking point.  Do not engage in worry but in prayer.  Worry produces stress, but prayer produces peace.  For it dwells upon the sure words and promises of God.

Prayer says such things as, “Father in heaven, you know all the things I need, even before I ask for them.  You feed the birds of the air, and not one of them falls to the ground apart from your will.  Help me to trust that I am more valuable in your sight than the birds and that you will feed and sustain me even in the midst of my troubles.  And dear Father, you splendidly clothe the lilies of the field, even though they are little more than the grass.  Give me to believe that you will also clothe me and take care of me.  Keep me from worrying about tomorrow, and give me a thankful heart for the gifts you give day by day, my daily bread, and everything that is necessary to support this body and life.  The world is passing away, but your Word of mercy and life will never pass away.  It will save and sustain me forever.”

Faith prays in that way because of what Jesus has done.  For He is the One who made us children of the heavenly Father.  Remember, Scripture says that we're not children of God by nature but children of wrath.  But in Christ we're brought into the family as God's children.  In order that we would be delivered from a world that is falling apart and winding down to its end, the eternal Son of God entered into this fallen world as one of us, as our brother.  Jesus took upon Himself the curse that our sin has brought on creation.  All the deterioration and the degeneration and the death He endured for us on the cross.  In so doing, Jesus caused death itself to die.  Jesus destroyed the sin that makes everything only momentary and impermanent.  In Christ it is written, “The old order of things has passed away . . .  Behold, I make all things new.”  Jesus came forth from the grave in power, bringing with Him a new creation that will never deteriorate or fall or perish, for death no longer has dominion over Him.

Trusting in Jesus, knowing all that He has done and prepared for us, our worries and fears are calmed.  For if God has provided so bountifully for our eternal needs, certainly He will care for us in all the necessities of this temporal life. And even when the hard times do come, even if it’s all taken away and God’s care seems to have vanished, we know that we who are His chosen, baptized people are not forsaken.  We believe that even when terror and tragedy, sickness and death come, He who created us can and will also recreate us in the resurrection of the body on the Last Day.  So literally nothing in all creation can separate us from the love of God in Christ.  And if we have Christ, then we have everything; for all things belong to Him, and in Him all things hold together.  That’s how Job could say in His suffering, in the loss of his property and his loved ones, “The Lord gave, and the Lord has taken away.  Blessed be the name of the Lord.”  “Though He giveth or He taketh, God His children ne’er forsaketh.”

“Do no worry about your life,” Jesus says.  Work hard, yes.  Plan ahead, certainly.  But don’t worry.  You’re not an atheist who thinks that we’re just drifting aimlessly through space, completely vulnerable to the random changes and chances of life.  You’re not an agnostic who doesn’t know who God is, whether he loves you or hates you.  You’re children of the heavenly Father, who has loved you to the point of giving you His own Son with all of His righteousness as a gift.

Today with His words, Jesus is inviting you to trust–and it’s not a blind trust in fate or invisible forces or the universe—but trust in the one true God who loves you, the Father, the Son, and the Holy Spirit.  Nothing else can save you–not your busy schedules and feverish activity, not all your righteous works, not your investment portfolio and comprehensive insurance.  Nothing can save you other than His grace, His suffering and death for you and for your salvation.  Martin Luther once wrote: “Cast your worries upon God’s back, for God has a strong neck and strong shoulders.  He can easily carry the load.  Moreover, he has commanded us to commit our cares to Him, and loves it when we do.”

To assure you of this, the Father who gives you your daily bread now feeds you with Jesus’ very body and blood under the bread and the wine for the forgiveness of your sins.  The Father who clothes you and cares for your body robes you in the white garment of Christ’s righteousness in your baptism.  It is because of that certainty of who we are in Christ that we take to heart the words of Philippians 4, “Be anxious for nothing, but in everything by prayer and supplication, with thanksgiving, let your requests be made known to God; and the peace of God, which surpasses all understanding, will guard your hearts and minds through Christ Jesus.”