Come, For All Things Are Now Ready

“A certain man gave a great supper and invited many.”  This certain man is God the Father.  The supper is the banquet of salvation, the heavenly meal of forgiveness and life which Christ His Son purchased by His death for sin and by His victory over the grave on Easter.  In fact Jesus is Himself the meal, the bread of life given in the Word and in the holy supper of His body and blood.  God has sent out His Holy Spirit to invite many through the preaching of the Gospel to come to the feast.  All things have been prepared by God; there is no cost or strings attached.  Jesus has won redemption fully and completely.  The Holy Spirit comes purely by grace to draw people to the divine banquet.  Those invited may freely dine on the finest of fare which God has to offer.

“But,” it is written, “they all with one accord began to make excuses.”  They all had other things they thought were more important than this invitation.  Being with the Giver of the feast and sharing in the joy of His meal was low on the priority list.  Maybe some other time. 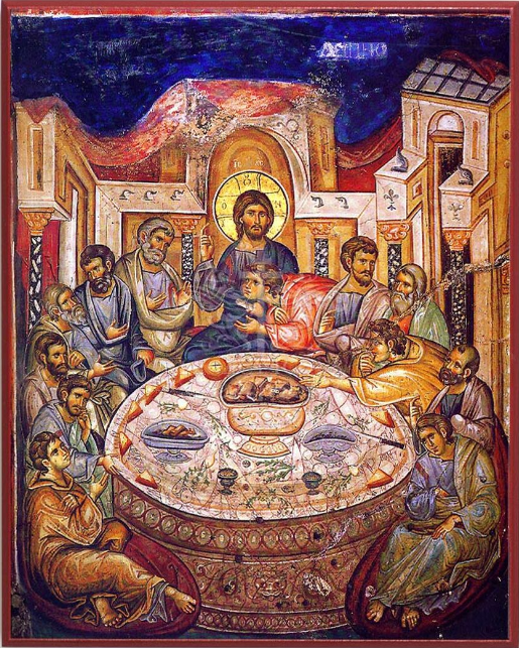 All demonstrate unbelief in the Gospel invitation.  The first said, “I have bought a piece of ground, and I must go and see it.  I ask you to have me excused.”  This man is caught up in his property and does not believe that in Christ the meek shall inherit the earth.  He seeks to gain the world and in the process forfeits his soul.  He sees the value of land but does not desire the priceless land of the new creation.  He elects to go and see his piece of ground, almost like a burial plot, showing his destiny to return to the ground in death.  Especially as the summer months begin, we feel the temptation to let the place up north or the vacation trip down south or out west take priority over the worship of the Lord and His invitation to the Gospel feast.  We dare not treasure what we have paid for above that which God has freely given in Christ.

The second said, “I have bought five yoke of oxen, and I am going to test them.  I ask you to have me excused.”  This man prefers his work to the work of Christ, who said, “Take My yoke upon you and learn from Me, for I am gentle and lowly in heart, and you will find rest for your souls.  For My yoke is easy and My burden is light.”  This man is like those who want to produce their own righteousness before God, walking under the yoke of the five books of Moses’ Law, rather than trusting in the righteousness of Christ, walking in the freedom of the Gospel.  But in the end they will find no rest.  Their labor and struggle will be in vain.  The temptation for us is to value our efforts at good living over and above the grace of Christ.  Whenever we think we can do without the banquet of Jesus serving us His Word and Sacraments, we are by definition trusting in our own service and works.

The third said, “I have married a wife, and therefore I cannot come.”  This man prized his earthly marriage over the heavenly wedding of Christ and His Churchly Bride.  He loved union with his wife more than communion with his Creator.  When death parts him from his wife, there will be nothing to restore him to life.  So also, we must guard against turning the good blessings of marriage and sexuality against the God who created them, or putting our spouse or family before God.

The sad thing is that on the surface, all of these excuses seem pretty reasonable.  There’s nothing wrong with taking care of land or business concerns or participating in sports or being with your wife and family–or for that matter, trying to stay safe from COVID.  But when such things are  used as justifications for saying “no” to God’s invitation, then they have become idols to whom you are giving false worship.

And lest we who are here become self-righteous, what about when we come to the banquet of the Lord but don’t eat?  Which is to say, what about those who hear the Word of the Lord that is read and preached in this place but refuse to believe and receive it?  They’re at the table, so to speak, but refuse to trust in the Gospel and partake of God’s free gifts of mercy and life in Christ.  The food is in front of them, but they’re not hungry.  They’re just going through the motions.  They don’t have any desire or see any need for Jesus and what He has to give.

That’s what happened with the Jews in Jesus’ day.  They had Him in their midst.  They heard Him preach and teach.  But most of Israel rejected Jesus as the Messiah and the Savior.  They felt no need for the salvation He came to bring.  Often it was only the lowly and the outcast of society who believed in Jesus and trusted His words of life.  This is what Jesus is referring to in the parable, “Then the master of the house, being angry [at those who rejected the invitation], said to his servant, ‘Go out quickly into the streets and lanes of the city, and bring in here the poor and the maimed and the lame and the blind.’” “If you people are too good to come to My feast, fine.  Then I’ll fill my house with those whom you self-righteous look down upon, those who hunger and thirst for righteousness.  And they shall be filled with eternally satisfying food.”

It was the same way later with the apostle Paul.  In his missionary work it was his custom to begin by going to the Jewish synagogues in whatever land he was in and preach Jesus as the Messiah.  But the message would often be disdained by the Jewish leaders and embraced rather by the Gentiles.  Once in the city of Antioch, when the Jews were opposing the things spoken by Paul, he said, “It was necessary that the word of God should be spoken to you first; but since you reject it, and judge yourselves unworthy of everlasting life, behold, we turn to the Gentiles.”  This is what Jesus is referring to in the parable, “The servant said, ‘Master, it is done as you commanded, and still there is room.’  Then the master said to the servant, ‘Go out into the highways and hedges, and compel them to come in, that my house may be filled.’”

God will have a full house on the Last Day for His feast.  And if those who should come don’t, then many whom you might not expect will–not only the poor and the lame and the blind, but also even many from among the pagan nations will be brought to believe and be saved.  For this meal is given not on the credentials of the ones invited but on the graciousness of the Host.

This parable is given by Jesus, then, as a warning to us against being complacent in our own spirituality and trusting in our own merits and qualifications to insure that we will receive eternal life.  To the Jews who thought they had heaven wrapped up by virtue of their genealogy and good deeds, Jesus said, “None of those who were invited shall taste my supper.”  Let us also be on guard against putting our faith in our religious pedigree or our good living.  For when we do that, we will lose our hunger for the feast.  We’ll stop taking the things of God seriously as we should.

In the end the only ones taking part in the feast are beggars and foreigners.  For only they  were given to see their need for what the Master had to give.  This is what you also must become before God: a hungry beggar, a needy foreigner, like a starving man in a third world country.  You must be brought by God to see that of yourself you are spiritually empty, wasting away, with nowhere else to turn but to Him.  The divine Law must expose your desperate need so that you will crave the Bread of Life.  Only then will the great supper be not just one of many other more important things to do.  It will be the One Thing that you cannot do without, the very source of your life.  For the meal is Christ, who is the Life.

Our Lord Jesus offered up His body on the cross to be “roasted” in the fire of judgment.  He literally suffered hell in our place at Calvary.  Having rescued us from sin and Satan by His holy death, and being now raised from the dead, Jesus offers Himself to the whole world as heavenly food that we might receive His saving gifts and be nourished by them.  This holy food is served up and offered wherever the gospel is preached.  When you believe the gospel, you partake of Christ, and this nourishes and strengthens your soul.  It tastes of forgiveness of sins, eternal life and blessedness.  When you are surrounded by death, sin, disease, and hard times, let this be your hunger and thirst.  Especially those who are under great affliction are the ones who find this food so delicious.  When terrified and fearful hearts and consciences hear in the gospel that Christ suffered and died for their sins, allowed himself to be prepared and served up as food for all hungry and thirsty souls, and believe this without doubting, then their fragile hearts, distressed consciences, and troubled souls are comforted and revived.  (Martin Luther)

And so the Spirit’s call goes out to you again this day, “Come, for all things are now ready.”  Jesus says, “Whoever eats my flesh and drinks my blood has eternal life, and I will raise him up on the Last Day.”  The banquet table is laid before you in the Word and the Supper.  Partake of this holy, life-giving food.  Believe in Christ and be saved.  Receive the foretaste of the feast to come, the marriage feast of the Lamb in His kingdom which will have no end.