Christmas is a New Genesis

In the beginning, God created the heavens and the earth.  You know the account in Genesis.  Everything was good.  Then everything went wrong.  Man, wanting to like God, rebelled against God.  Man fell.  With him all creation fell.  Now, because of sin, man dies.  In the end this creation, too, will die and pass away.

We are not mere victims of that past event in the garden, for we have been participants in the rebellion of Adam and Eve; we have shared in the same deeds.  Titus 3 says,“We ourselves were also once foolish, disobedient, deceived, serving various lusts and pleasures, living in malice and envy, hateful.”

We would be destined to perish eternally, except for the fact that the kindness and love for mankind of God our Savior has appeared in the person of Jesus Christ.  Instead of simply erasing this creation and destroying us fallen creatures, God has set out to redeem and recreate us through His Son.  Christmas is about God inaugurating a new creation in Jesus.  That’s why John’s Gospel starts out, “In the beginning was the Word . . .  And the Word became flesh and dwelt among us.”  In the flesh of Jesus God has made a new beginning, a new world, a new creation that is not subject to decay and death.  Christ’s death and resurrection in the flesh broke the curse of sin and brought life and immortality to light.

Christmas, then, is like a second Genesis.  It is as if the very first day were happening all over again.  God said, “Let there be light.”  And the Light of the world was born.  Before the old creation passes away, God the Son has entered into this world in order to make a new Genesis that will never pass away.  He has done this so that we who are subject to the old order of things might be released from it and made to be participants in the new and eternal order of things.  And it is only through the body of Jesus that this takes place, He who once was laid in a manger.  He is the point of contact between the old and the new.  He is the only portal, the only passageway from this fallen creation into the everlasting creation. 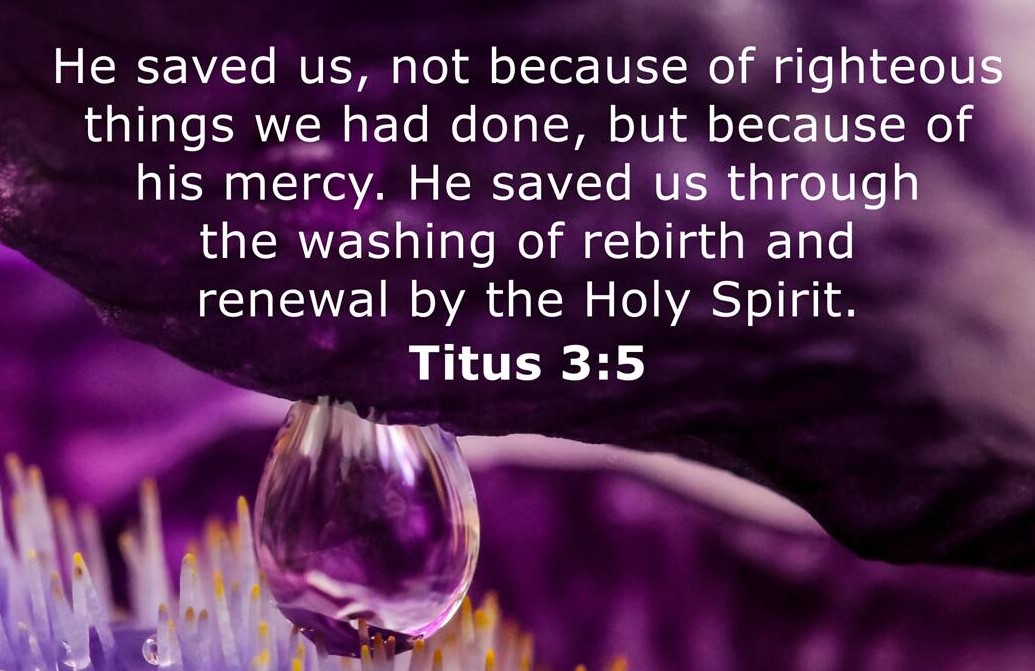 So how do we pass through that portal?  How are we made to be participants in this new creation?  Paul answers that question in Titus 3 when he says, “God saved us through the washing of regeneration.”  That last word, regeneration, is especially significant.  In the Greek “regeneration” literally means “genesis again,” “a new genesis.”  Do you see?  Through baptism we are recreated, given a new life in Christ.  We are made to share in the eternal blessings of the new world that Christ brings into being.  Even as Christmas is a Genesis event, so also Baptism is a Genesis event.  For God’s creative power is at work–not only to wash away our sins, but also to join us to Christ, who gives us entrance to the new heavens and the new earth.  It is just as Jesus said in John 3, “Unless one is born of water and the Spirit, he cannot enter the kingdom of God.”  Just as the Spirit of God hovered over the waters in the first genesis, so also He hovers over the waters of baptism to bring about the second genesis, the new birth into the kingdom of God.

Christmas continues to happen, then, every time someone is baptized.  For what takes place in the water but that someone is born as a member of the body of Christ?  So in a very real way, the Word is still becoming flesh as He draws more and more people to Himself by water and the Spirit, those who have their life in Him.

In this present age between Christ’s first and second comings, the old creation of Genesis and the new creation of Christmas overlap.  We still live in this fallen world of tragedy and pain and disease and death.  And yet we are also given entrance into the new world by our baptism into Christ’s body.  Both are now going on at once, and we feel that conflict.  But on the Last Day the old order of things will utterly and completely pass away, and the full glory of the new will be revealed forever.

And please note that all of this creating and saving work is entirely God’s doing.  Paul makes this clear when he says here, “not by works of righteousness which we have done, but according to His mercy He saved us.”  It’s not our merits, it’s the merits of Christ by which we have forgiveness and life.  It’s not because we climbed up to heaven by our superior spirituality, it’s because the Son of God came down from heaven and was incarnate by the Holy Spirit of the Virgin Mary and was made man.  Christmas is the paradigm and pattern of our salvation.  God comes right down to where we’re at in order to save us.  He doesn’t do part and then require us to do the rest.  He goes all the way, 100%, even to the point of becoming one of us.  He descended to us in order that we may ascend with Him.

It’s all God’s doing.  The first creation was made by His power alone.  Christ’s coming at Christmas to inaugurate the new creation occurred without our help.  And even our entering into that new life through baptism is entirely by the Lord’s action.  When it comes to the Gospel, God is the one who does all the verbs.  “He saved . . .”  “He poured out . . .”  And when the verbs are applied to us, they’re in the passive voice, “We have been justified by His grace.”  God has justified us, He has declared us righteous through Christ, the righteous one.  He has made us His heirs having the hope of eternal life.  All this purely as a gift of His grace.  Only by this grace are we able to do as Paul says here and “maintain good works” for the good of our fellow man.

So then, as Paul reminds Titus here, don’t engage in useless discussion with those who deny this, who enjoy religious debate simply for the sake of hearing themselves talk.  After admonishing such people the first and second time, reject them, he says.  They are self condemned.  Don’t get drawn in to all their contentions and strivings about the Law.

For St. Paul concludes, “This is a faithful saying.”  Our salvation and re-creation by God’s grace alone in Christ is trustworthy, rock solid, reliable.  The same God who kept His promise to send a Savior will surely keep the promises that He made to you in your baptism.  The Lord is faithful, and He will do it.  Trust solely in Him.  Grace be with you all.