Adorning the Doctrine of God our Savior

At Christmas we celebrate the fact that the Word became flesh, God the Son took on our body and soul, true God became true man in our Savior Jesus Christ.  We know that this doctrine is at the very heart of our faith.  For apart from this incarnation of our Lord, He could not have taken our place under the Law; He could not have been our substitute in death to rescue us from our sins.

But even so, some might still fail to see how Christmas connects with their lives “out there” in the world.  You might ask, “What does Christ’s coming in the flesh mean for my day to day living?”  Titus 2 helps us to make that connection.  For it joins how we are given to conduct ourselves with the birth of Jesus.  St. Paul says, “The grace of God that brings salvation has appeared to all men, teaching us that, denying ungodliness and worldly lusts, we should live soberly, righteously, and godly in the present age.” 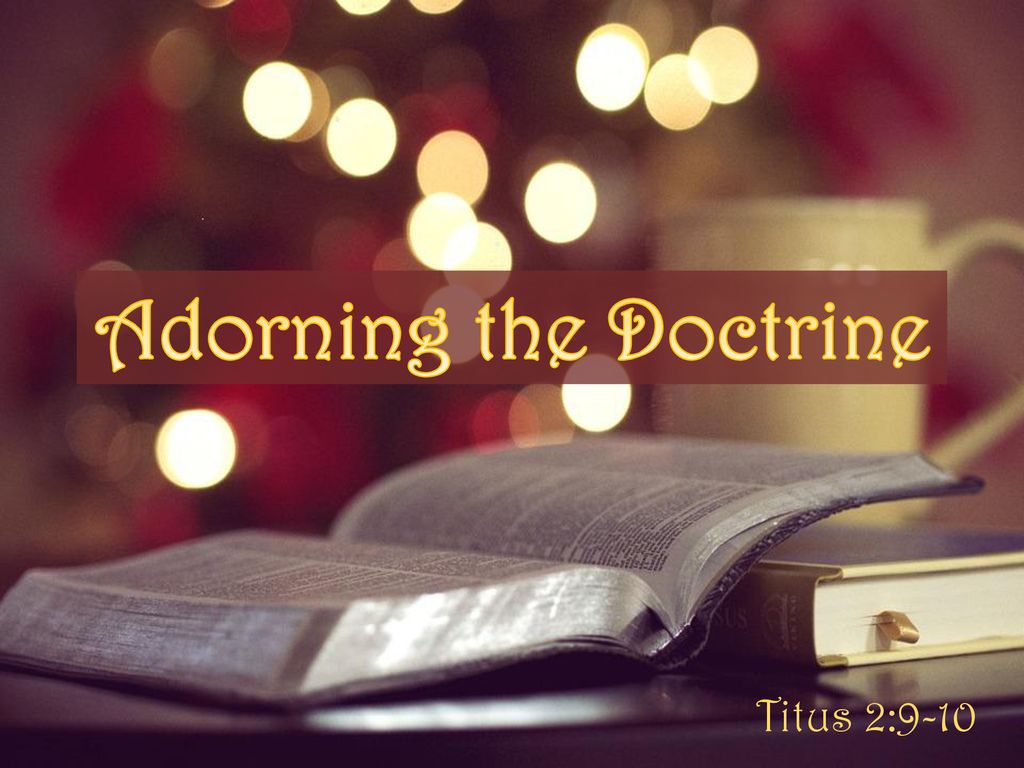 You see, the Word became flesh in order to redeem our lives in the flesh.  If our bodily, physical lives were not spiritually significant, if the material world was not good, then Jesus would not have spent nine months in the womb of the Blessed Virgin Mary, nor slept in a dirty cattle feeder, nor suffered in the flesh on the cross, nor been bodily raised from the dead.  But the same God who pronounced the material creation “good” in the beginning confirmed that pronouncement at Christmas in the true humanity of Jesus.  Jesus came to restore our humanity that was lost in the fall, to lift us up again to what it means to be truly human.  He came to renew us–not just our spirits, but our entire beings–in His own sinless body.  Christmas tells us that our lives in the flesh matter.

That’s why Paul gives several specific instructions about how our life in Christ is to be conducted in the flesh.  First of all, he gives directions to the older men.  They are to be sober, ones who show restraint in indulging their desires.  The older men are also to be reverent and dignified in their conduct.  They are to be “sound in the faith.”  The word “sound” here literally means healthy.  It’s the same word that was used just the verse before in referring to “sound doctrine,” “healthy doctrine.”  In other words the older men are to hold firmly to the truth of God’s Word, not accepting even the smallest virus of false teaching, but holding to the true doctrine that brings eternal health in both body and soul.  Being mature in years, they are to be mature in faith and in understanding of the Scriptures, showing patience and love as an example to the whole congregation.

To the older women Paul gives these instructions.  They are likewise to be reverent in their behavior.  But the word that is used here for “reverent” is a special word meaning literally “temple-like.”  In other words, the older women are always to be conducting themselves in a manner suitable for a temple, worthy of holiness.  Their daily duties are to be carried out as a matter of sacred service towards God and towards those whom God has given them to serve.  Their entire life has been made like a holy temple by the sanctifying presence of Christ.  Therefore, they are not to be slanderers–gossips, rumor-mongers, back-biters.  Nor are they to be ones who drink too much.  Rather, they are to be ones who teach good things to others, both by their words and by their actions.

Specifically they are to be ones who direct and counsel the younger women in godly ways, whether they are daughters or granddaughters or simply another believer.  According to Titus 2 these younger women are to be taught to love their husbands and their children–that is, to be devoted and committed to their spouse and family as that which God has graciously given them, and not to neglect them for the sake of something they think will be better for themselves.  It is in that context of husband and children above all that they are to live out their life of Christian service.  This is emphasized by the fact that the young women are here directed to be homemakers–literally, ones working at home, tending to the many and varied needs of the household.  That doesn’t necessarily mean that it’s a sin for them to work outside the home.  But by God’s design their first calling is to be wives and mothers, exercising discretion, purity, goodness, and faithfulness to their husbands.

So also, Paul directs Titus to exhort the young men to be sober-minded.  Like the younger women, they too are to practice discretion and sound-mindedness and self-control, not recklessly indulging every whim but showing sensibility in their behavior.  And Paul applies all of this especially to Titus.  For Titus himself was a young man–or at least young for his position as bishop of Crete–probably around 30 or so.  This may be why Paul tells him at the end of chapter 2, “Let no one despise you.”  Rather in all things, Titus was to be a pattern of good works to the church, showing integrity in his doctrine and teaching, not being corrupted by desire for worldly gain or respect, but conducting himself in such a way that his opponents are put to shame, because they have nothing evil to say of him.

Finally, the Apostle teaches that bond-servants are to be obedient to their own masters.  In the first century in the Roman empire, slavery was still a very common practice.  But Paul does not encourage such bond-servants to assert their so-called “rights” and rebel against their masters and throw off their servitude.  For that is not the way of Christ, who has established earthly authorities to be honored, even the authority of a master over a servant, or in our case an employer over an employee. No, the way of the cross is patient endurance and a willingness to serve and to suffer if needs be until the deliverance of the Lord comes.  Therefore, bond-servants were exhorted to be well-pleasing to their masters in all things, not talking back to them, not stealing from them secretly, but being faithful to them.

Now, why does Paul give all these specific guidelines for how Christians are to live?  Why does he want believers to be zealous for good works?  Is it so that we can merit something from God by our goodness?  Is it so that we can earn for ourselves a special spot in heaven?  No, the Scriptures say the only wages we’ve earned for ourselves is death.  So why are we to conduct ourselves in this way?  Paul gives two answers: first, so that the word of God may not be blasphemed; and second, to adorn the doctrine of God our Savior in all things.  Do you see?  The motivation, the reason for good works in God’s sight is not to draw attention to ourselves or to win something for ourselves, but rather to draw attention to the Gospel by which all things have already been won for us in Christ, to decorate and ornament that saving doctrine of God.  We are to live this way in the flesh in order to bring glory to Christ, the Word made flesh. The way we live in the body bears witness to what Jesus did for us in His body and blood by His birth and death and resurrection.  For we have been baptized into His body.  It is as the Small Catechism confesses in the first petition of the Lord’s Prayer: “How is God’s name kept holy?  God’s name is kept holy when the Word of God is taught in its truth and purity, and we, as the children of God, also lead holy lives according to it.  Help us to do this dear Father in heaven!”

This second chapter of Titus proclaims to you that Christ came into this world and gave Himself for you to redeem you from every lawless deed.  He bought you with the price of His precious blood to release you from the bondage of unholy living.  He has ransomed you by His holy cross and purified you by His Word and Spirit to be His own special people, set apart by His gracious forgiveness and mercy, called out of darkness into His marvelous light.  You belong to the Lord; you are holy in His sight.  God grant you to live in that holiness as you look for the blessed hope and glorious appearing of our great God and Savior Jesus Christ on the Last Day.