A Thief in the Night

We heard it last week from St. Peter.  We hear it again today from St. Paul.  “The day of the Lord comes as a thief in the night.”  Our Lord Himself says the same thing in the book of Revelation, “Behold, I am coming as a thief.”  That’s an odd sort of image to associate with our Savior Jesus.  But there is something for us to learn from the fact that our Lord comes to us like a bandit, a criminal.

Thievery is something we would more readily associate with the devil.  For Satan is indeed the thief and swindler of humanity.  He came to us in the garden like a con-man, flattering with his tongue, smooth-talking.  He told our first parents that they were missing out on a great deal that God was keeping to Himself.  If they would just eat of the forbidden fruit, then they would be like God themselves.  Turning them from God’s words to his own deceitful words, the devil robbed them blind.  He stole away their humanity and pilfered the glory in which they were created. 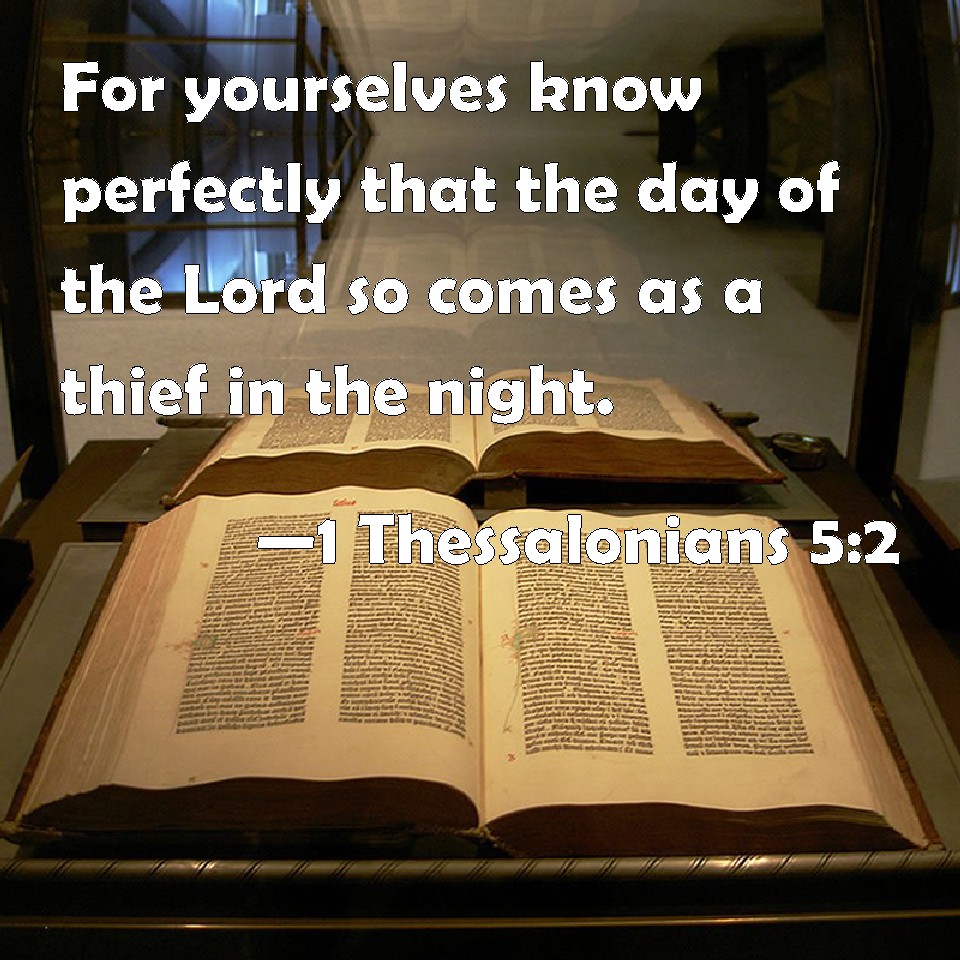 That’s why you sons of Adam and daughters of Eve find yourselves in your present fallen state.  We are now less than human, a disordered version of what we were created to be.  We can sometimes feel that in our very souls, that things just aren’t right.  Instead of being fully human creatures under our good Creator, and honoring Him above all things, we would rather be like God, running our own lives, doing things our own way, following our own ideas.  The result for us is the same as it was for Adam, a less than human existence too often marked by anger and disrespect and lusts and jealousies and petty grudges and gossip and selfishness.  The human race has been mugged by the serpent and left to die.

However, just as God often punishes one thief by another thief in this world, so that the robber ends up losing what he stole, so also God punishes the devil by sending His Son as a thief.  The Son of God became man for that very purpose, to steal and snatch back our lost humanity from the evil one and to restore us to fellowship with God again.

Just think of how our Lord entered into this world.  It wasn’t with great fanfare.  Instead, He came like a thief–quietly, hidden in the shadows, with nobody but some shepherds noticing His arrival.  Jesus came on the scene under cover, secretly, like a holy burglar, to win back for you what the devil stole away.

By becoming human, by taking on your body and soul, Jesus cleansed your humanity with His divine holiness.  God has greatly exalted you by becoming not an angel or any other creature but a human person, your blood brother.  He partook fully of your humanity so that in Him you might become truly human again.

Jesus was born like a thief, and He also died like a thief.  For He was crucified between two robbers.  And in fact that’s what He was.  Not only did He come to rob the devil of his victory over you, He accomplished that by robbing you of your sin.  He stole away from you every uncleanness, every damnable failure to love, along with every hurtful and evil thing that has been done to you.  He robbed you of it all, took it as His own, and demolished it in His cross.  It was by death that Satan stole away man’s glory; and so it is by the death of Christ and His resurrection to life again that the glory of man is recaptured and that your humanity is restored.

And today’s Epistle reminds us that there’s one last thing our Lord is going to do like a thief.  He’s going to come back to this world suddenly and unexpectedly.  A robber doesn’t announce when he’s coming.  He tries to catch people unawares.  In fact Jesus once said, “If the master of the house had known what hour the thief would come, he would have watched and not allowed his house to be broken into.  Therefore you also be ready, for the Son of Man is coming at an hour you do not expect.”

Jesus is coming back to bring judgment on the unbelieving world.  We don’t know when it’s going to be, but He has said, “Surely, I am coming soon.”  We are given to watch for Christ’s return and to be looking out for it as much as if we were on the lookout for a thief who was coming to our house.  We are to be prepared for Jesus’ arrival so that it will a day of joy and not of fear.

Be on guard, then, against being lulled into a sense of complacency while you wait for that Day.  This is what Paul speaks of in the Epistle, “For when they say, ‘Peace and safety!’ then sudden destruction comes upon them, as labor pains upon a pregnant woman.  And they shall not escape.”  Beware of that worldly way of thinking which lives for the moment without a view to Jesus’ return. For that is precisely the attitude of the five foolish virgins in the Gospel.  They thought they had their bases covered.  They had a little oil in their lamps.  Why overdo it?  Everything’s going to be fine.  Why should I be preoccupied with the coming of the Lord?  I’ve got other priorities in life.”

The lamps in the parable are the Word of Christ.  For the Psalmist says, “Your Word is a lamp to my feet.”  The oil in the lamps is the Holy Spirit, who creates and sustains the flame of faith in Christ.  To be like the foolish is to fail to give proper attention to Christ’s Word and the working of the Holy Spirit.  It is to avoid the Lord’s preaching and the Lord’s Supper, or merely to go through the motions.  When these instruments of the Holy Spirit are neglected, the flame of faith is in danger of going out.  The foolish thought they had their spiritual life all together.  But they were not prepared for a delay; they weren’t ready to watch for the long haul.  And then the call finally comes at midnight; time has run out.  And the foolish are left in a panic, scrambling to get oil, banging on a locked door saying “Lord, Lord, open to us!” and hearing those awful words, “I do not know you.”

Remember that you know neither when Christ is returning, nor when the day of your own death is coming.  Therefore, the Psalmist prays, “Lord make me to know my end, and what is the measure of my days, that I may know how frail I am.  My age is as nothing before you; certainly every man at his best state is but vapor,” a dark mist.

But now Christ has enlightened you with the gift of His Spirit in the waters of baptism.  That’s why Paul says in the epistle, “You, brethren, are not in darkness, so that this Day should overtake you as a thief.  You are all sons of light and sons of the day.”  For you have been united with Christ, who is the Son of light.  Therefore, “let us who are of the day be sober, putting on the breastplate of faith and love, and as a helmet the hope of salvation.”

That is the way of the five wise virgins.  Those who are wise act as if there is nothing so important as the arrival of the bridegroom.  As they tend faithfully to their daily callings and enjoy the good gifts of creation, they do so always with a sense that that is secondary to Christ and His return.  That’s what they’re really living for and watching for.  And so they don’t want to cut it close when it comes to the oil in their lamps.  They “devote themselves to the apostles’ doctrine and fellowship, to the breaking of bread and to the prayers.”

The wise probably seemed way over-prepared, lugging around those extra jars of oil along with their lamps.  But in the end their wisdom was vindicated as they joined in the bridegroom’s procession and entered into the wedding hall.  So also Christians may appear to be overdoing it, going to divine service each week, meditating on God’s Word, praying and watching for Christ’s return, when they could be doing other things.  But in the end, such wisdom will be vindicated, when our Bridegroom returns to bring us into the new heavens and the new earth in which there is no more sorrow or crying or pain or death, but only perfect joy in God’s presence.  So take to heart the beautiful promise which the apostle speaks to you who believe: “God did not appoint us to wrath, but to obtain salvation through our Lord Jesus Christ, who died for us, that whether we wake or sleep, we should live together with Him.”

Fellow believers, God has granted you to be among those who are wise.  For the Holy Spirit has made you wise unto salvation through Gospel of Christ the crucified.  “Assuredly,” the Lord says, “I know you in your baptism.  I have forgiven you and redeemed you and claimed you as my own.  I give you freely of My Word and Spirit, so that you may endure in the faith and watch to the very end.  I give you a very real foretaste of the wedding feast in My holy supper.  I am truly  here for you to forgive and sustain you.”  And so the Gospel cry rings out again in this place today, “Behold, the bridegroom is coming!  Wake, awake!  Go out to meet Him at His holy altar!”

The Lord will come like a thief in the night.  Let us watch and be ready that we may rejoice in that day.