If there’s one thing that Scripture makes very clear, it’s that many people who think that they have eternal life with God are going to be surprised to find out that they actually don’t.  Matthew 7 gives one of the starkest examples of that.  Jesus says, “Many will say to Me in that day, ‘Lord, Lord, have we not prophesied in Your name, cast out demons in Your name, and done many wonders in Your name?’ And then I will declare to them, ‘I never knew you; depart from Me...”  Or in the parable of the 10 virgins, 5 are left wanting to enter the heavenly wedding feast and thinking they should be let in, but they’re locked out.

And in today’s Gospel reading, I am sure that the rich man thought that his status before God was in good shape.  We shouldn’t turn the rich man into a caricature–some sort of heartless greedy monster.  He was likely respected and looked up to by the people.  He would have been seen by the average person as having been blessed and favored by God.  The rich man’s money and business may well have provided jobs or built synagogues.  The fact that he didn’t pay attention to the miserable beggar at his gate probably wouldn’t have seemed terribly strange.  Beggars like Lazarus were ones that most people would have wanted to avoid, like a homeless man that we might scurry past and avoid eye contact with on the street. 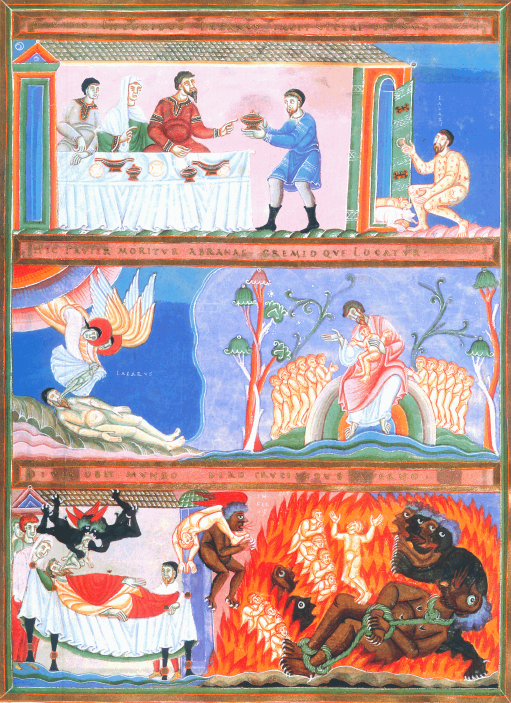 To this day most people believe that as long as they do their best trying to live a good life, as long as they do more good than bad, they’ll go to heaven.  They may not be 100% sure of it, but one thing most people are sure of is that they don’t deserve to be cut off from God forever in hell.  What funeral have you ever gone to, even of someone who never went to church, where people didn’t say, “Oh, they’re in a better place now; they’re looking down on us from above,” and other such cliches.  What eulogy didn’t make the deceased sound like a good person at heart, even if they were a bit of a jerk.  Almost everyone thinks they’ll eventually end up in heaven.  And most people, sadly, are in for a rude awakening.

The rich man in hell knew that his brothers were under the same delusion that he was.  That’s why he wants to warn them.  He realizes that they think they’re fine with God, when they’re not.  They, too, might refer to Abraham as their father and think they’re among the people of God, but they are deceived.  They don’t share Abraham’s faith.  And so they aren’t true children of Abraham.  Let this warning, then, also come to you and me today, so that we don’t end up like the rich man, complacent and falsely secure, putting our faith in the wrong place.

That’s really the key difference between the rich man and Lazarus–their faith.  It wasn’t so much about what they possessed, but what possessed them, what had a hold of their hearts.  Even though he may have been a religious person, the rich man’s real confidence was in his own abilities and smarts, his own resources, his own power and standing as a pillar of the community.  Even in the fires of hell, the rich man rejected Moses and the prophets.  Did you notice that?  When the rich man wants to use Lazarus to go back to his brothers from the dead and warn them, Abraham says that Moses and the prophets are more than enough; that Word of God is all that his brothers need.  But the rich man doesn’t think that’s good enough.  He thinks that Scripture is empty, that it doesn’t have the power to bring them to repentance or to save them.  He wants a miracle.  Even in hell his trust is in something else than God’s Word.  Just because he sees heaven and hell doesn’t mean that he’s become a believer.  Death does not change someone from being an unbeliever to a believer.  The hard-heartedness of the unbelieving goats perseveres into eternity.  In fact his unbelief actually becomes a part of his eternal torment, as his hard heart grows increasingly more frustrated and angry at the ways of God.

Lazarus, on the other hand, clung to Moses and the prophets.  The Word of God was his hope.  For you may remember that the name “Lazarus” literally means “God is My Helper” or “My God is Help.”  Even though Lazarus longed for mere crumbs from the table, even though the street dogs licked his wounds, even though in this world Lazarus had nothing–not even his health–in truth, and perhaps surprisingly, Lazarus found what he was seeking.  He found mercy that endures forever.  He received Living Water and Bread from Heaven. He obtained perfect satisfaction and health.  It was all there for him in Moses and the prophets.  For there in Moses and the prophets was the Messiah, Jesus, his Help and his Savior.

You recall that when Jesus was walking with the two disciples on the road to Emmaus, it is written that “beginning with Moses and all the Prophets, He explained to them in all the Scriptures the things concerning Himself.”  Moses and the Prophets are all about Jesus.  So Lazarus went to heaven not because he suffered or because he was poor but because he believed Moses and the prophets.  Or to put it more precisely, he believed in the Messiah Jesus whom they prophesied, who would take the sins of the world upon Himself and earn for him God’s favor and a place in heaven.

Lazarus found there in the Scriptures a man much like himself.  Isaiah prophesies that the Christ is a man of sorrows and acquainted with grief, despised and rejected by men, one without any attractiveness that we should desire to be near Him.  Jesus Himself said in the Psalms that He was surrounded by unbelieving dogs who mocked Him in His pain, who pierced His hands and His feet.  And yet, Isaiah says, “He Himself took our infirmities and bore our sicknesses. . .  And by His wounds we are healed.”  The blood that flowed from those wounds cleansed us of our sin and bought our eternal healing, the restoration and resurrection of our bodies to glory on the Last Day.

Truly Jesus made Himself to be just like Lazarus for us.  For notice how Lazarus is comforted there in the bosom of father Abraham, laying on his chest.  That is a clear picture for us of the first two persons of the Trinity, the eternal Father and Son, as John 1 states, “No one has seen God at any time.”  But, “The only begotten Son, who is in the bosom of the Father, He has made Him known.”  Jesus is the very heart of the Father; and He has made the love of the Father known to us by coming down from heaven into our poverty and affliction in order to raise us up and bring us back with Himself to the riches of heaven.

Lazarus was a true son of Abraham, not only by blood, but also because he had the same faith as Abraham.  You recall how the elderly, childless Abraham was told by God that he would be the father of many nations, that his descendants would be as countless as the stars.  And even though Abraham had no evidence or experience to go on, he believed God’s promise, and God credited it to him as righteousness.  Abraham was righteous by faith alone.  And so was Lazarus, too.  Lazarus trusted in God’s promise that He would not forsake the lowly, that no one who puts his trust in Him would be put to shame, that the Lord saves those who have a humble and contrite and penitent heart.  Even when all of the evidence and experience of Lazarus’ life said that God had forsaken him, he still clung to God’s promise.  By that faith he was accounted righteous before God.  He was saved.

And so it is, then, also for you.  The evidence and experience of your life may seem to suggest that God doesn’t like you, that He’s forgotten you.  Unlike the rich man, you may have this nagging feeling that you’re not going to heaven, that there’s no way to escape hell because of what you’ve done or because of the things that have happened to you.  But don’t judge God by what you see or feel.  Instead, go on His Word and His promises.  Trust that what He says is true and real.  For God does not lie; He does not break His Word.  He will come through for you–maybe not the way you want right now; maybe not even in this life.  But most assuredly He will do so in the life to come.  For He has conquered your sin and death by His own death and resurrection.  By faith in Him, you are accounted righteous before God.  You are holy in His sight, flawless.  The comfort and happiness of heaven is yours, entirely by the grace of God.  You don’t have to earn it by your works.  It’s all a gift of Christ’s love for you.  So while the rich man was unexpectedly surprised by his eternal torment, you will be blessedly surprised by the boundless goodness and joy of everlasting fellowship with God.  What He has prepared for you will be an unanticipated marvel and wonder.

Those who are like the rich man refuse to believe this.  They want a god who rewards people based on merit, and so they get what they deserve, the fire of hell.  Abraham reminds us that even if someone like Lazarus were to rise from the dead, that wouldn’t cause anyone to believe who didn’t already believe Moses and the prophets.  For Jesus did in fact raise Lazarus from the dead right before Holy Week.  And yet that miracle didn’t cause the rich Pharisees and chief priests to believe; they only plotted Jesus’ death even more fervently.  So beware of desiring miracles and signs, needing to see such things before you’ll believe.  Miracles don’t create faith.  For faith comes by hearing the Word of Christ.  If God gives signs, they only confirm the faith that He has already worked through His Word and Spirit alone.

Let us, rather, be like Lazarus in spirit–helpless, weak, dependent on the Lord, satisfied with no other food than what comes from His table, eating the crumbs of the Bread of Life that satisfy completely.  And yes, let us be confident of heaven, but not because we think we deserve it or that we’ve earned it by our efforts–if you’re putting your faith in something inside of you, well, good luck with that.  No let us be confident of heaven because of Christ alone and what He has done for us, how He has claimed each of us poor, miserable Lazaruses as His own by water and the word.  And let us set our hearts on that Day when the angels will bear us home and we will be drawn to the Father’s side in Christ, there to bask forever in His goodness and love.