Imagine you were living centuries ago, in medieval times.  If you were to ask the question, “What shall I do to inherit the royal crown and become king?” most people would probably think you were being silly or foolish.  After all, there’s nothing you could do to gain that inheritance.  You’d have to be a member of the royal family.  No matter how good you are, how sincere you are, how hard you work, you cannot inherit the crown unless you have the right bloodline.  It’s something you’re born into.

Unless, of course, you were planning treason and rebellion.  For there actually is one thing you could do to inherit the kingdom: go to war.  Kick out or kill the old ruler and make yourself king (or queen).  The kingdom and the crown can only change hands like that by violence and force. 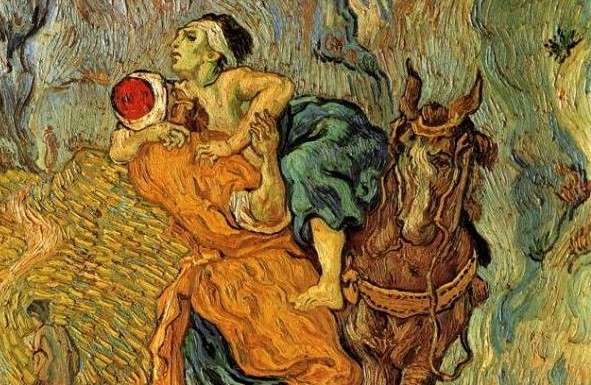 This is why the lawyer’s question to Jesus in today’s Gospel is also quite silly and foolish, “What shall I do to inherit eternal life?”  There’s nothing he can do to inherit.  It’s who you are and who your family is that matters with an inheritance.  The lawyer’s question seems pious, but in reality it betrays a treasonous and unbelieving heart.  For the only way you can gain the kingdom of God by your own doing is to try to kick God off of His throne and take over yourself.  And that’s what every attempt at earning eternal life by your own goodness is–it’s making war against God.  It’s a coup attempt that tries to replace His grace with your own righteousness.  Such revolts against the King of kings will not succeed.  His kingdom only comes to you as a freely given inheritance.  It is bestowed by God the Father on His royally born children, all those who believe and are baptized into Christ His Son.

The lawyer clearly doesn’t get this.  So since the lawyer is stuck on what he must do, Jesus turns the question around and asks him, “What is written in the Law?’ The Law is where you go to find out what you should do.   And to his credit the lawyer answers well, “Love the Lord your God with all your heart, soul, mind, and strength, and love your neighbor as yourself.”  That’s right. That’s true.  Love God; love one another. Simple and straightforward.

But then come these daunting words from Jesus, “Do this and you will live.”  That is a pretty unsettling statement.  For it implies, “Don’t do these commandments, and you will die.”  Will we really live eternally based on what we’ve done?  Do we who are obsessed with ourselves and our own dreams and self-preservation love God with every fiber of our being, always, above all things?  And do we love our neighbor selflessly, gladly, willingly, from the heart?  Or are we sometimes annoyed by their constant needs?  “Do this and you will live” is a dire threat.  The lawyer’s test has backfired.  He is dead, and he knows it.

And so he does what lawyers often do.  He looks for a loophole. “And who is my neighbor?” he asks.  He still wants to argue his way out of damnation.  But he is not nearly as clever as he thinks. For every Sunday school student knows the answer to that question.  Who is my neighbor?  Everyone is your neighbor.  Every single person you come across.  You’re supposed to love all people as yourself.  There are no exceptions, no escape clauses, no one else to pass the blame onto.  The Law exposes you.  You have not fulfilled its demands.  You will not live.

Except, notice this: our Lord does not actually answer the lawyer’s question, “Who is my neighbor?”  We know the answer is everyone.  But Jesus uses the parable of the Good Samaritan to pose a new question, a very different question: “Who was neighbor to (the man)?”  The answer to that question is not everyone.  Everyone was not neighbor to the man in the ditch! Only One was. This points us to the Lord Jesus Himself.  He is the doer and the giver of inheritances.  He is the One who has mercy, who was neighbor to the man who fell among thieves. The Son of God did what the Law could not.

The priest and the Levite were powerless, bound by all the rules about not being clean if they touched blood or a dead person. They could not help, even though they should have.  But Jesus our Samaritan was full of mercy and compassion. He dirtied Himself with our fallen condition, coming in the likeness of sinful flesh.   He shared in our suffering and made our problems His own, to the point that He Himself would be beaten mercilessly and robbed of His clothing and left for dead on the cross.  He knew the cost to rescue us from sin and Satan, but He went down into the ditch of death anyway to make us clean.  He bound up our wounds in His own wounded flesh.  He poured on His own sacramental oil and wine.  He picked us up and carried our burdens.  He walked while we rode.  He paid for everything by His precious blood.  He sees to our ongoing care in the church while we heal.  And He is coming back.

Then Jesus says: “Go and do likewise.”  Now most people simply take that to mean that you should do like the Samaritan did.  And that is true; as Christians we are given to show forth the love of Christ and help our neighbor in need no matter who they are, especially within the stations of life where God has placed us.  But that’s not actually Jesus’ main point here.  Jesus’ main purpose is to move the lawyer and us away from trying to justify ourselves and thinking we can earn the inheritance.  For we heard in the Epistle, God gave His inheritance to Abraham not by the law but by promise.  Jesus is not just giving us a lesson in the Law here.  He is showing us Himself and how the kingdom of heaven comes to you by grace.

Jesus is teaching you to see yourself as the one beaten up on the side of the road, and to seek mercy from Him, the only One who can truly help you.  He has changed the question from what you must do to what He has done for you.  Who has been neighbor to you?  Who fulfilled the Law entirely for you?  Jesus Himself and Jesus alone.  That’s true mercy.  That’s the inheritance of heaven given by promise.

In the end the Kingdom of God does come to you through violence, the violence of the cross.  However, in His death the Lord is not toppled from His throne.  The devil thought He could take the crown by killing Christ.  Instead Satan himself was conquered, and the risen Jesus has opened the kingdom to all believers.  God the Father has adopted you as His own through baptism.  You are brothers and sisters of Jesus.  He has given you the crown of life.  You truly are heirs of heaven.

So remember how the mercy of God is revealed here in the changing of the question from “Who is my neighbor?” to “Who was neighbor to (the man)?”  The focus is not on us but on Jesus.  He has done what you and the Law could not.  He was moved by His own compassion to come and help you who had been robbed by sin and Satan and left for dead.  You have been rescued by Christ and cared for and raised up by Him.  He is the One who has truly loved you as Himself all the way to the end.  Who was neighbor to the one who fell among thieves?  The One who had mercy, the One who was crucified with thieves for you.

(With thanks to the Rev. David Petersen for some of the above)